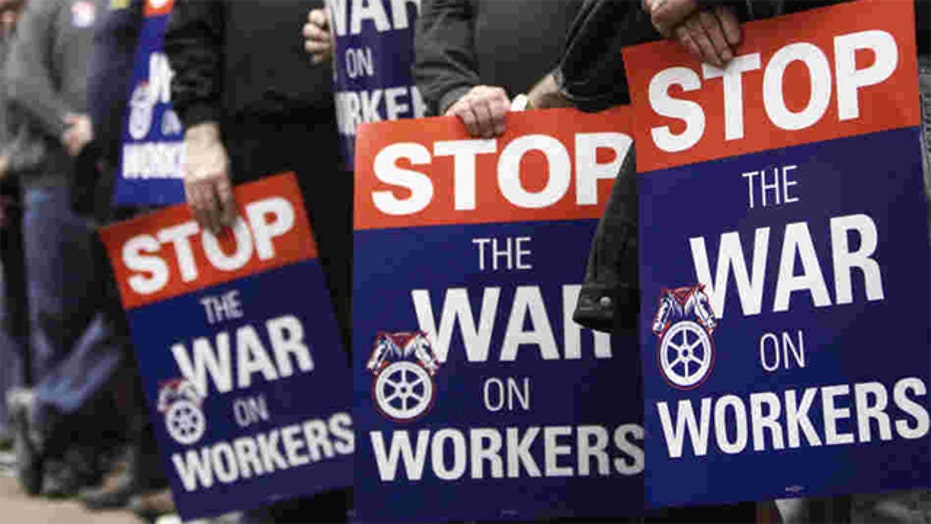 DOES IRS SCANDAL PROVE WE NEED TO GET RID OF FEDERAL UNIONS FOR GOVERNMENT WORKERS?

KIMBERLY GUILFOYLE: I think it's a great question, because it is an inherent conflict of interest. There's bias embedded there when you have a situation like this where they're protected. It's very difficult to remove them. They have a positive incentive to go along with the administration. If you look at these numbers-the IRS workers' political donations-2008 and 2012 to President Obama $110,000 in contributions; 78 percent of them contributed to President Obama and his reelection because they've got a good thing going with him, so they want to make sure it stays in place; versus Romney and McCain in 2008 and 2012, respectively, only 22 percent. So no wonder they've got it in the bag for the guy.

JONATHAN HOENIG: People have a right to unionize but I think any employer-including the federal government-has to be on mushrooms to hire them. They've destroyed every single industry in which they've been intimately involved: steel, airlines, textile, coal, education we've talked about at great lengths. That's why private employees by and large won't work with union employees these days. The only place their influence is growing is in government, where-as the IRS case shows-they can use force against their political opponents. That's why we should cut ties with them altogether.

KIRSTEN POWERS: People have a right to unionize. Any group of workers has a right to unionize. Unions, historically, have played a really important role in our country. That said, it is time to look at some of the issues about not being able to fire people, whether it's firing teachers or firing government workers. I worked in the Clinton administration, and we had somebody who was a civil servant in my little area who just never came to work, and she couldn't be fired.

GOVERNMENT ASSAULT ON MEDIA COMPANIES: CAN IT HURT AMERICAN PUBLIC AND TAXPAYERS?

KIRSTEN POWERS: If you go back to the beginning of the Obama administration I think all of us here at Fox can remember that they decided in the first year to launch a war on Fox News and try to claim that we were not a legitimate news organization, and frankly lied and distorted a lot about Fox News, and most of the media just stayed silent. There was no pushback against this, and now everybody is completely shocked that the Obama Administration has total contempt for the media.

JONATHAN HOENIG: Freedom of speech is the freedom to speak without fear of government intimidation, impunitive action, or interference, and of course this is exactly what that is. In my opinion, it really is the beginning of flat-out tyranny. In a free society it's ideas how we communicate; it's not force, it's communication of ideas. So this not only hurts the press, but it really hurts the republic. Any infringement on that freedom to speak with fear that government's monitoring what you're saying-it's just terrible for the republic, and again, I think it's the beginning of totalitarian rule.

WAYNE ROGERS: I'll tell you, I differ with Jonathan on the following: this is not the beginning of tyranny, it is tyranny. It is already here. You have a violation of the constitution of the United States. The First Amendment has been violated. This is the idea of poking into everybody's private business, particularly in the case of the press, who is the only way we can get our information between the public and the federal government or anybody else. It's outrageous. Then, the chief legal officer of the United States, the Attorney General of the United States should go to jail for this. He should go to jail. It's outrageous.

KIMBERLY GUILFOYLE: To spy on American citizens-and not just American citizens, but journalists who are exercising their First Amendment right, freedom of the press. Never in history has a journalist gone to jail for trying to talk to a source to get information. So the fact that they were using this as a shield and a sword, to protect themselves as they were able to do this - going after this man to the point where they even went and wiretapped the phone records of James Rosen's parents. Where do they get away with this? Why does Eric Holder still have a job?

JONATHAN HOENIG: This is straight out of the Book of Ram; never let a crisis go to waste. Barbara Boxer, Frank Lautenberg, and of course Al Gore are always quick to blame any natural catastrophe-which of course is terrible-on man-made global warming. It's really argument through emotion. They look at these terrible pictures of devastation and say "don't you care about these people, if you do then you're going to pass these laws and regulations which are profoundly anti-man." Thank God for gas and oil to help clean up the terrible mess from this devastation. I'll tell you, the greens have been wrong on every single prediction they've made since it was called the Ecology Movement, back in the 1950s.

KIRSTEN POWERS: I did a little research on it, and global warming people don't even really believe that tornadoes are caused by global warming. They will say that droughts are cause by global warming and hurricanes, but in terms of tornadoes, that's not even something that they would really even say, so I'm not sure why he said it. And certainly the timing of it was terrible.

KIMBERLY GUILFOYLE: This was ill-timed and insensitive. The guy just has no clue, but he's not the only one. What we've seen is the democrats and liberals using opportunities like this tragedy that has befallen people-families, children that have been killed-and trying to piggyback it for his own political agenda, which is unconscionable. Joe Biden spoke to the coastguard graduates this week and he used that opportunity to say that offshore drilling threatens national security and our climate-to a bunch of coastguards that are out there guarding the waters while we're drilling. So they don't miss any opportunity to advance their goals.

WAYNE ROGERS: We know, for example, that the temperature has risen 1.4 percent since 1880. We know that Glacier National Park now has only 27 glaciers when in 1910 it had over 150 glaciers. We know the globe is warming. We know all of that. The question is whether it's anthropogenic or not. In other words, is this man-made or is this natural? It doesn't really matter because there is no argument that can say "well you can lift out an isolated incident like a tornado or a hurricane or whatever it is and say this has to do with global warming." That's nuts. So they've got to get the science right first, and then come back and talk about how you correct it.