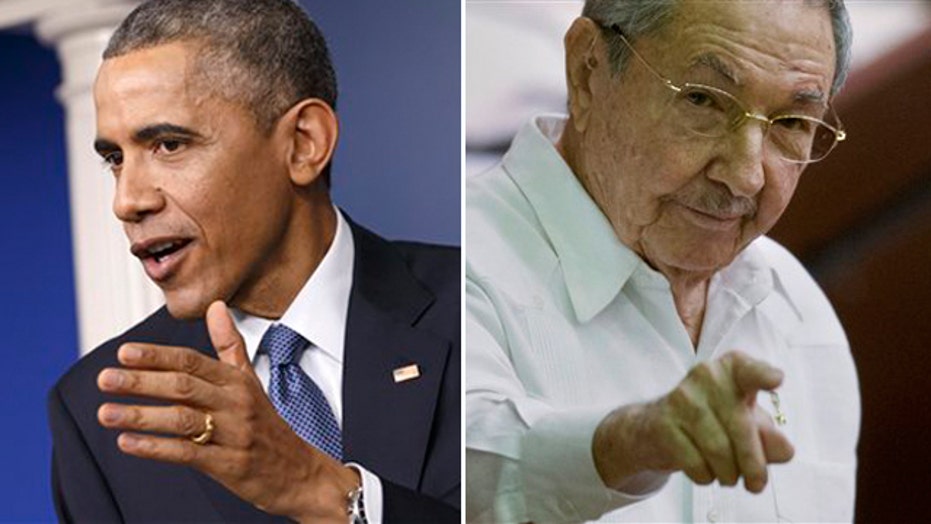 JONATHAN HOENIG: Well, trade is good, Eric. It's mutually productive and I think when the embargo, when these policies were enacted Cuba was a military threat the. They are no longer a military threat. So some change in policy is warranted. What's so disheartening is the manner in which the President did it. He never misses an opportunity to denigrate America. What does he say? "Our policy hasn't worked. This all happened before I was born. The Pope told me to. We have to do it for the Cuban people." It just demeans America once again, and that's why I think the policy is a good idea, the manners, the ideas behind it are absolutely monstrous.

JESSICA EHRLICH: We actually have one of the oldest Cuban populations in the country here in Tampa. So it's been an issue for us for decades and decades, and I think it's actually really exciting and a wonderful thing to be able to finally get the concessions they're having. The Red Cross will be in Cuba. They're finally going to have the UN human rights groups allowed back in Cuba to see what life is like for the Cuban people who have been there in this horrible regime, and hopefully with the expansion also of the internet will be able to see not only increased trade and tourism with Florida and Cuba but a better relationship.

MICHELLE FIELDS: I think normalizing relations with Cuba is great. It's good. The best way to loosen the grip of a dictator is through free trade and travel. However, I don't think this was a good deal. I think we should have told Cuba if they wanted this deal they need to make democratic concessions. They needed to make concessions with free elections. They needed freedom of the press and more freedom for everyday ordinary citizens in Cuba. If we allow tourists to start going into America, that's great for Cuba's economy, but the thing is a lot of these resorts, hotels, these restaurants, are owned by the Castro regime. The money is not going to ordinary citizens. It's going to make the regime wealthier.

WAYNE ROGERS: Unfortunately I am the oldest one here I think. I do remember the Bay of Pigs and I remember all that. But any time you recognize a country it's good for you. The reason it's good for you is you are able to establish a base within that country, and we haven't been able to do that. You know, when you have a consulate or an embassy somewhere that allows you to get spies behind the curtain as it were. You can do all kinds of things.

MICHELLE FIELDS: I know that my millennial peers are regretting their vote for President Obama. Look, young people are suffering right now. 18 to 29-year-olds have a 14.5% unemployment rate. And 30% of them live at home with at least one parent. This is because we have a terrible economy. President Obama promised us that we would get everything, and instead all we got was free birth control.

JONATHAN HOENIG: I don't think I could start it [my own business] today. Honestly, given the change in the last 15, 20 years. Think about it: the public education has gotten worse, the cost has gone up, and young people today have a lot more debt than ever before. There's fewer opportunities out there, not only because of the economy as Michelle talked about, but also because of things like the minimum wage, which prevented people from getting the skills. More than anything, it's just the spirit of today's young people. They've been told "don't be an individualist, don't be out for yourself. Don't go to Wall Street. Go to Africa and build latrines." It's America's spirit; it's that spirit of individualism among young people that is unfortunately being harmed.

JESSICA EHRLICH: This isn't something that just happened in the last six years. If you look at the data, we had this also in 1990. A lot of it has to do with the fact that we had unfettered, rampant running wild on Wall Street that led to a recession. We've had an enormous increase in the cost of higher education. You've got crushing student loans. So not only are these people either low level of employment, or unemployed...

WAYNE ROGERS: Actually, Eric, since 1980 I think these numbers go back to. And they may have been worse before. We just don't know what the numbers were. But when you think that the poverty level is a little over, for a single person in this country, it's a little over $11,000 a year, and poverty for a family of four is $23,000 a year, and you look at rest of the world-- it's an amazing thing that the United States economy is as strong as it is, has done as well as it has. It tells you once again, it underwrites the validity of the free market system and what it can do and what that standard of living can be regardless of what those things are.

WAYNE ROGERS: Well, we're certainly eye witnessing a depreciation of [journalism], Eric, you know and you see it all over the news. For example, in the White House, Ben Rhodes-- he's the White House top adviser. His brother, David, is the head of CBS news for God's sake. We've sees this with Gruber. When he came out with this thing, the press ignored it. NBC took three, four days to even acknowledge it. Ideology is the enemy of truth, and ideology is the enemy of fact. Reporters today don't go out and get the facts; they go out with a predetermined attitude about something and then try to make sure this story when they write it matches up with their it's ideology.

JONATHAN HOENIG: Well, you can be a trader. I think making $72 million is quite difficult. I disagree with your basic premise. I think journalism has gotten better because no longer can these reporters spin a story. I mean, you couldn't have NBC faking the exploding gas tanks today. You've got this army of citizen journalists out there. There's never been more information instantly available to everybody. We're living in the days of Max Headroom and journalism is just starting to thrive. Not at the New York Times, not at Rolling Stone, but at many, many other areas around the globe.

MICHELLE FIELDS: This is what happens when journalists put their liberal cause and the cause they believe in above reporting the fakes and truth. What they're interested is not reporting the truth but validating their own beliefs, and this has real consequences. Let's take, for example, ObamaCare. If reporters and journalists had reported the facts about ObamaCare, about the detrimental consequences of ObamaCare, people wouldn't have lost their doctors; they wouldn't be paying higher premiums.

JESSICA EHRLICH: This is cyclical in journalism. At the beginning of the last century, you had the outbreak of yellow journalism. You had the rise of the tabloid; all these lies being printed left, right, and center-- and they sold newspapers. I think if we can actually figure out a way with journalism and the media to make a successful business model, whether it's online news, whether it's the actual evening news-- then journalism ethics will return.