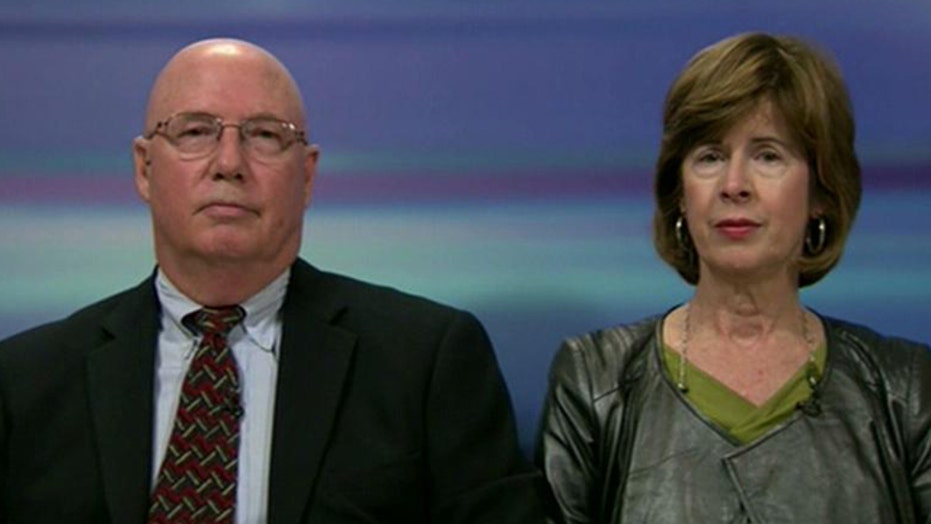 Two million Americans have been kicked off their insurance so far

This is a rush transcript from "The Kelly File," October 29, 2013. This copy may not be in its final form and may be updated.

MEGYN KELLY, HOST: More on the breaking story tonight that an estimated two million Americans have already lost their existing health care coverage. That, despite the president's repeated promises that if you like your health care plan you can keep it. Period.

Ian and Sarah Hodge are from Lancaster, Pennsylvania, they are two of those people who have lost their coverage already. Welcome to you both, thank you so much for being here. Ian, let me start with you, did you realize that your insurance policy was going to get canceled under ObamaCare?

IAN HOLDGE, LOST HEALTH CARE PLAN: No, we had no idea it was going to be canceled until we got the letter from Highmark.

KELLY: So when you were following the whole ObamaCare debate and you heard the president saying that, as we all did, did you believe him?

IAN HOLDGE: Yes, in fact, you know, our biggest concern when we got the letter is we felt betrayal. That was the emotion we felt the most, we felt betrayed by what have been talked about by -- said by the administration or by the president himself.

KELLY: So you get the letter in September saying, Ian and Sarah, this is your insurance company, which I know you say you liked, your policy is canceled?

IAN HOLDGE: Yes, we tried -- I tried to go on the exchange on October 1st, the first day, was unable to sign in at all. Tried about 10 times on that day. Periodically went back to try to sign in, I never was really successful in signing in until just recently, and when I was able to sign in I clicked on the plans and I got a blank page. So, the only way I was able to see any type of insurance coverage was this last week, when the healthcare.gov website allowed you to look at the policies without signing in.

KELLY: And I know that you said the policies were a lot higher. Looks like you may be paying up to 50 percent more. Sarah, I want to ask you, are you worried at all, given the condition of the website in particular these days, that you might have a coverage gap? That you could get to January 1st, where your polices expired, and healthcare.gov doesn't come through for you before January 1 and you don't have insurance.

SARAH HOLDGE, LOST HEALTH CARE PLAN: Well, that is a very real fear of ours, but we're trying our best to keep after it and to cover all of our -- you know, points and try to find something before then.

KELLY: You know, Ian, the administration came out, the White House came out today and said look, it is only five percent of Americans this is happening to. Your thoughts?

KELLY: And so if you could say something to the administration on this tonight, what would it be?

IAN HOLDGE: It would be, I would say that we would like to be able to keep the health care we had, Mr. President. And if you could change the law to allow that, that would be a positive for us.

KELLY: Good luck to you, sir, and you too, as well, Sarah. Thank you both so much for being here.

KELLY: Millions left in limbo, not sure what they're going to wind up with for coverage, or whether if they have any coverage at all. The administration saying, don't look at us, it is not our fault, it is the insurance company's.