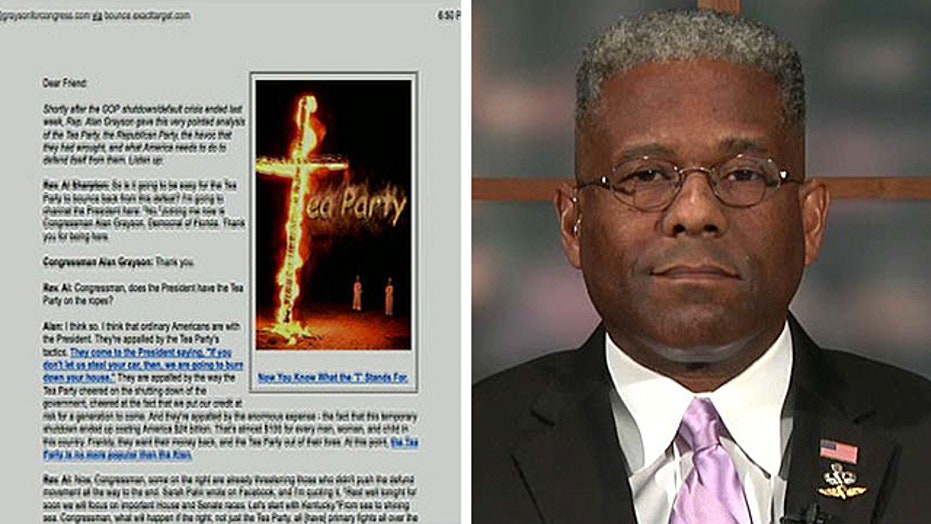 This is a rush transcript from "The Kelly File," October 22, 2013. This copy may not be in its final form and may be updated.

MEGYN KELLY, HOST: New details on our top story tonight, the fire storm over the fundraising e-mail that equates the Tea Party to the KKK, and this from the U.S. congressman. This e-mail sent out by Representative Alan Grayson's re-election campaign, it shows clan members burning a cross that serves the T, shows the T in Tea Party with a caption, quote, "Now you know what the T stands for."

Fox News contributor and former Florida Congressman Lieutenant Colonel Allen West is with me now. Sir, your reaction to this ad?

FMR. REP. ALLEN WEST, R-FLA.: Well, thank you, Megyn for having me on. And having been born and raised in Georgia, having parents that were born and raised during the '20s and '30s, I remember growing up, and seeing that burning cross on a clear night atop Stone Mountain so that everyone could see across Atlanta. This is despicable, this is demeaning, this is disgusting. We all know that Alan Grayson is pretty much a sensationalist and he can continue to say things that are over the top, but my concern is, where is the NAACP in Ben Jealous? Where is the National Urban League in Marc Morial? Where is Representative John Lewis, who was from Georgia who marched with Dr. King who as I was growing up was my representative as a young man in Atlanta, Georgia. Where are voices of the Congressional Black Caucus, Reverends Al Sharpton and Jesse Jackson?

Because obviously, what we are seeing now is the party, the Democratic Party that created the Ku Klux Klan and also created that symbol of the burning cross is obviously still proud to have that symbol being displayed. And you know, to all of us in the black community and those of us also as constitutional conservatives in the Tea Party, we have to be outraged, and this hypocrisy could not continue to stand.

KELLY: You know, there are certain things you don't touch in American politics, you don't mess around with. And you know, this referring, equating somebody to a member of the KKK, that could be one of them. The other thing is, you know, Alan Grayson, he referred to the absence of health care for everybody in the country as the holocaust. I mean, he is always getting out on that limb, and where is the accountability for it?

WEST: Well, that's the question you have to ask. You know, the president came out and started talking about civility and our dialogue. Where is President Obama? You know, here we have the guy that's supposedly the first African-American president and we're supposed to be celebrating this end of racial animosity, but I think it has gotten even worse and I think that the president should be speaking out about this and he should reprimand and censure Allen Grayson for what he said.

But I think the big difference is that the president does not share that same experience that young men such as myself and women have seen and understand what the Ku Klux Klan represents in this country, especially if you grew up down south.

But why isn't Nancy Pelosi speaking out about this, why isn't Debbie Wassermann Schultz or Harry Reid?You know, we continue to hear the use of this extremist language, Jihadist language, arsonists, extortionist, and now this equating constitutional conservatives, people that just believe in a constitutional way of government to operate, with people who were responsible for lynchings and horrible things in the south and all across this country.

KELLY: Yes. And when we contacted him, he doubled down on it and cited a litany of examples where he believes it was the Tea Party attacking President Obama by citing his race, claims that he is a Kenyan and a Muslim, citing incidents from basically the bowels of the Internet. I mean, you can find things like that from both sides about members of the other party, whether it characterizes the entire party is a very different question.

Congressman Allen West, thank you so much for being here.

WEST: Thanks for having me, Megyn. Congratulations on your show.