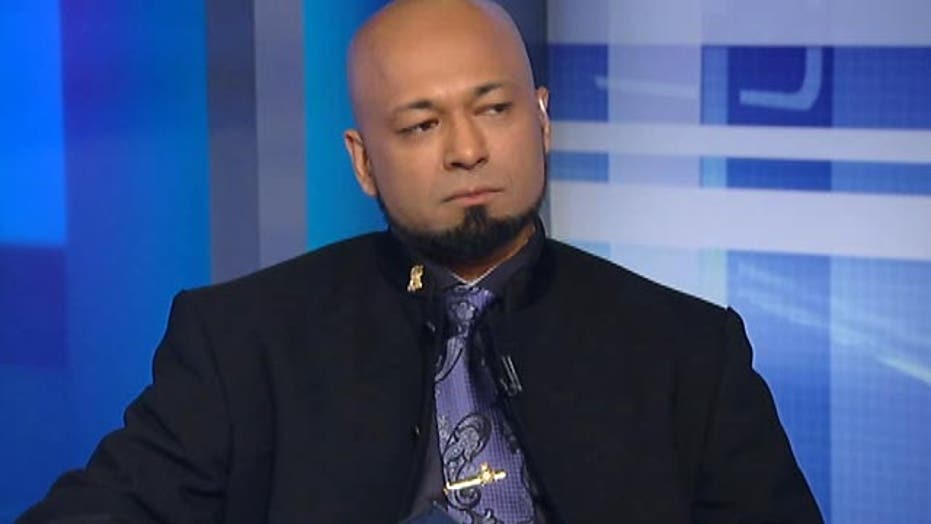 Confessions of a former jihadist

This is a rush transcript from "On the Record," May 20, 2015. This copy may not be in its final form and may be updated.

How do groups like ISIS turn young people into jihadists? The author of "Undercover Jihadi," Mubin Shaikh, joins us. Nice to see you, sir.

MUBIN SHAIKH, FORMER JIHADIST: Thank you for having me.

VAN SUSTEREN: You were a jihadist, why did you become one?

SHAIKH: It's a mix of ideology and foreign policy grievances. For me I was made to feel guilty about the western lifestyle that I was living, trying to find my way, my identity, who am I supposed to be, how western am I supposed to be? How Islamic am I supposed to be? Are the two incompatible, as I tried to answer these questions, I find myself moving towards more extreme views.

VAN SUSTEREN: Why did you stop being a jihadist?

SHAIKH: Well, it really came down to studying the religion properly. I mean, these extremists they cherry pick verses. I mean quoting half of verses so I spent two years in Syria studying Arabic and Islamic studies and I had a (inaudible) a scholar who went through the interpretations and basically debunked them.

VAN SUSTEREN: Was it difficult to leave? I assume had you friends in Syria, right?

SHAIKH: Yeah. When I was still in Canada and with these extremist individuals, I mean, yeah, there were people that they were with me, three of my friends, two of them went to Pakistan, and one went to Yemen. I never saw them again. I heard they had been killed and I was very close to going myself, but I thank god that I didn't go down that route.

VAN SUSTEREN: So you picked up and you returned home to Canada. And what did you do when you got to Canada? You say I'm not a jihadist anymore? What did you do?

SHAIKH: Well, I became disillusioned and this is really what we are looking for now, especially in Isis context, foreign fighters who have gone and disillusioned. They don't like what they see. It's not what they show you on the brochure so to speak. I was disillusioned. I came back and the first week I was back an individual had been charged under the terrorism act in Canada. And he was my buddy from childhood. And so, I basically contacted the security intelligence service.

SHAIKH: In Canada who, of course, took the opportunity to recruit me as an undercover operative. And look, I felt like I was doing, you know, my duty to prevent innocent people from being killed. This is my religious duty. And that's what I felt I was doing. And so I took on a new identity, so to speak of really self-policing the community. And that is really...

VAN SUSTEREN: Are there -- I mean, you are the first jihadist, non-jihadist person I have met. Are there others who have gone as young people joined a jihadist group and then come back? Is that common?

SHAIKH: It happens more often than we know. The problem is a lot of them want to lay low. They don't want to be known by the authorities or their former friends or they don't know how the society is going to react to them. You know, there are some of them around, but they are trying to keep a low profile. You know, there are others who have gone public. But, nobody really that has become operational in that sense.

VAN SUSTEREN: Why do they want to kill? To me why do you want to do a suicide bombing? I don't get that.

SHAIKH: Yeah. I mean when you are told these stories that, you know, if you do this, you are going to go to heaven, you know, young kids.

SHAIKH: I think for a lot of these individuals, you have to look at different context. If we are talking about westerners who want to go and do this especially growing up in western context. They are exposed to a lot of opportunities, a lot of chances. They plugged out of the western system. They no longer internalize or I don't think they ever internalized western values or even really truly Islamic values. The idea that god put us here to live. If he wanted us to be dead, why would he give us life in the beginning? There is something to be said about dying for a just cause but what these people do is spin it to say that our cause is the just cause and I want you to be a part of it. And for you to have an internal memory here, you are nobody 14, 15, 20, 25-year-old nobody. Suddenly you become from zero you become a hero overnight.

VAN SUSTEREN: Did you ever think I want to be a suicide bomber? Did that ever cross your mind?

SHAIKH: Not really a suicide bomber but I mean the idea that I would, you know, rush head long into certain death is something that is a warrior mentality. And so a lot of these people have taken what they think is a warrior mentality and really it's not. To do the things that they are doing, killing innocent people, civilians especially, there is no heaven for them on the other side.

VAN SUSTEREN: Thank you very much for joining us. I should note that you testified before the Senate Homeland Security Committee last week. The Senate was interested in hearing from you as well. Thank you sir.