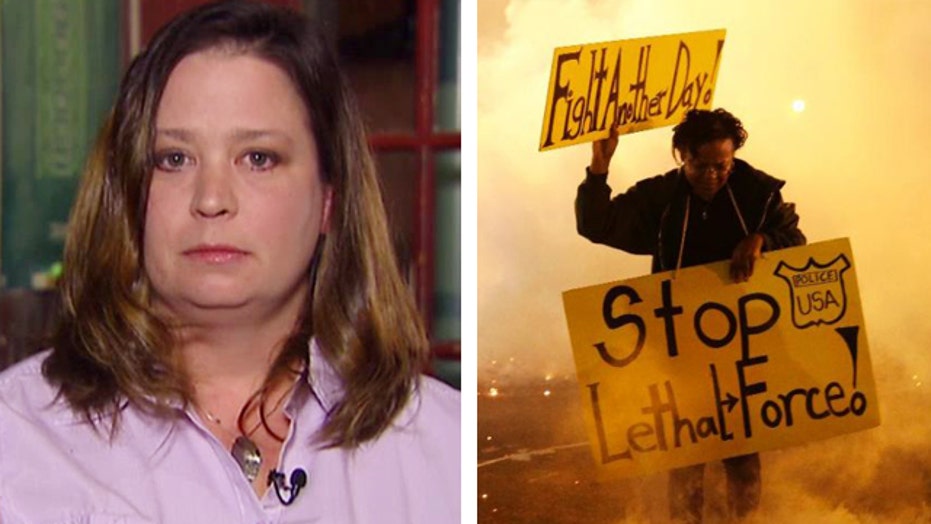 This is a rush transcript from "The Kelly File," April 29, 2015. This copy may not be in its final form and may be updated.

MEGYN KELLY, HOST: The scope of the damage to Baltimore's economy tonight is hard to add up. Not only were more than 150 businesses damaged or destroyed -- it's only property -- but others are not re-opening for now, or are not opening at night. This woman had to be held back after trying to cross police lines, forcing her to watch her business burn in what may be a total loss. Look at her.

Other businesses like this bar may have fared slightly better but after confronting rioters at their front door and having their owner punched in the face, they faced yet another obstacle we're hearing from many other businesses as their calls to 911 went completely unanswered.

Stephanie Webber is co-owner of Mick O'Shea's Irish Pub that you just saw in that video. Stephanie, thank you for being here.

KELLY: First of all, let's just start with the first thing. Because what was your reaction when the mayor to come out on Monday, because now I want the audience to know she's denying that she gave the stand-down order, she's denying it. And yet the cops are saying she did. So I want to ask you, what was your reaction on Monday when we saw people protesting in the streets all day, we saw cops getting things thrown at them. We saw the situation escalating, to her coming out and saying I'm going to impose the curfew starting tomorrow.

WEBBER: What was my reaction?

WEBBER: My reaction is this is a difficult situation for everybody involved, and I'm not in politics, so I just have to kind of wait and see what I'm told.

KELLY: OK. So you adopt a wait-and-see attitude. So night comes.  What happened when these protesters approached your business?

WEBBER: Well, we were lucky enough that we were given a heads-up by an employee here that had left and he called and told me that they were rioting about two blocks up. So I went to the front door and when I saw them coming up the hill, I was able to lock the door which helped us keep them at bay. Eventually they did throw a brick, rocks, and shattered one of our windows, but they never made it in.

KELLY: How did -- who got punched in the face and how did it happen?

WEBBER: That was my brother, David. He's my partner here. When they were out front, he went out to go and speak to the young individuals that were pounding on our door, pounding on our window and trying to get in.  And within seconds, they punched him in the side of the head. We were able to get him back inside safely without it escalating and lock the doors again. At which point the pounding resumed and that's when I'm assuming it was a brick or rock, there was bricks and rocks all inside the restaurant or right by the front windows.

KELLY: Were you scared?

WEBBER: At the time, I was not scared because I guess I was filled with adrenaline. So I was very scared after the whole thing ended. I was shaking. My voice was, you know, quivering. So, yes, after it was all said and done I was very scared.

KELLY: You called 911. Did somebody pick up? Did you get, you know, any sort of response?

WEBBER: When I called 911 I did not. They were obviously dealing with a lot of other calls. One of my patrons that was in the building was able to get through to 911 and they gave a description of the car, they gave a partial plate and the police were more interested in where they were going next because they had already left us, so, you know, it's more important to go to where the rioters --

KELLY: Right. Where the next thing can happen.

WEBBER: Where they're going next. That's right.

KELLY: Do you believe based on what you saw that it's possible that this mayor gave a stand down order?

KELLY: Did you see any sort of a police presence trying to stop the protesters around your neighborhood?

WEBBER: Around my immediate neighborhood, no, but I know that they were a few blocks down and a few blocks up.

KELLY: Present on scene or actively trying to intervene in the damage that was being done?

WEBBER: I don't know. I was too busy cleaning up glass.

KELLY: Wow. What a situation in Baltimore tonight, as literally over 100 businesses have suffered similar fates to yours. And not to mention the police officers who have been injured as a result of the rocks and other bottles and so on that have been thrown at them.

Stephanie, thank you for telling us your story.

WEBBER: You're welcome. Thank you.