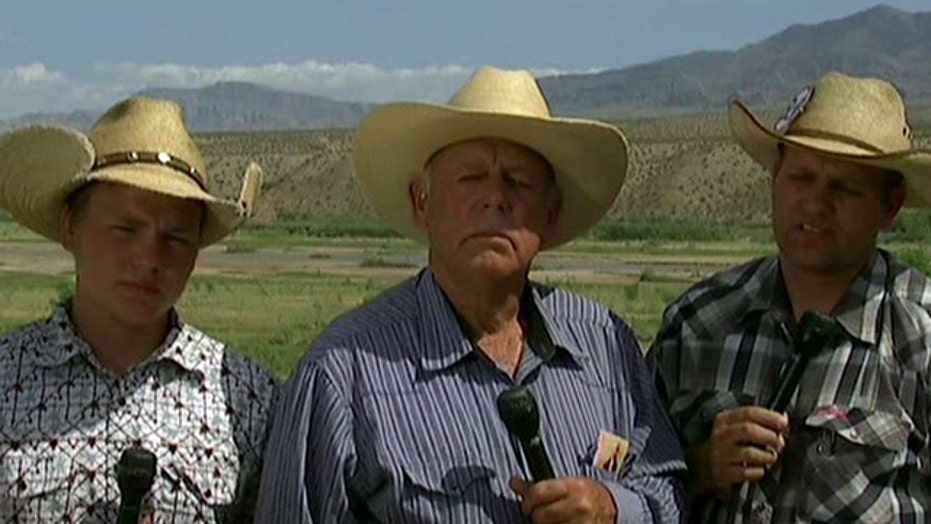 Bundy clarifies accusations made by the left

This is a rush transcript from "Hannity," April 21, 2014. This copy may not be in its final form and may be updated.

SEAN HANNITY, HOST: The rhetoric from the left about Nevada rancher Cliven Bundy and his supporters is getting worse and worse by the day. First, as the country marked the 19th anniversary of the Oklahoma City bombing over the weekend, vice chairwoman of the Democratic National Committee Donna Brazile made this disgraceful comparison after talking about how the feds backed down. Watch this.

DONNA BRAZILE, DNC VICE CHAIR: That was the right thing to do, to try to, you know, simmer things down. Remember, this is the 19th anniversary of the Oklahoma bombing. So this notion that Mr. Bundy has no other recourse but violence is -- anti-government violence -- is absolutely wrong. He's been waging this battle for two decades. He's lost. Everybody else is paying their grazing fees. He should pay his fees, as well.

UNIDENTIFIED FEMALE: I think we should be reluctant to compare Bundy to Timothy McVeigh.

HANNITY: And that's not all. Earlier today, runners embarked on the first Boston marathon since last year's terror attack. And just days ago, Senate Majority Leader Harry Reid had this to say about Bundy family supporters. Watch this.

SEN. HARRY REID, D-NV.: These people who hold themselves out to be patriots are not. They're nothing more than domestic terrorists.

HANNITY: Pretty unbelievable. Now, given the events in Oklahoma City and at the Boston Marathon, we really know what real domestic terrorists look like, and that's not Cliven Bundy or his supporters.

CLIVEN BUNDY, NEVADA RANCHER: Sean, I'd like to ask your audience, you've seen these videos the last couple of weeks. I want to ask you, who looked like the terrorists? Who is the domestic terrorists here? Did you see we the people with guns or did you the United States government with guns?

Harry, why are you acting like this? Why, Harry, are you calling for a civil war? That's not what we the people want. We just wanted you to disarm your army and get out of our state and start acting like citizens of the United States. That's all we want, Harry.

HANNITY: All right, Cliven, by the way, we're putting up pictures. Apparently, you put on your Facebook page, or I think your daughter did -- now, a lot of these dead cattle of yours -- and apparently, there were graves dug by BLM people. Is that true?

CLIVEN BUNDY: Yes, there's mass graves dug, and we have dug into at least one of them and we have found dead cattle in there, yes.

CLIVEN BUNDY: Well, I don't know. They've never sent me a bill. And I say I owe them nothing, zero.

HANNITY: OK. And you say you've never gotten a bill, but you got letters from them, and you told me last week you don't open their letters?

CLIVEN BUNDY: I haven't opened the recent letters. There could be a bill in there that I don't know about.

CLIVEN BUNDY: And those letters would have come within the last four or five days.

HANNITY: All right, let me ask you this because documents now show that the Bureau of Land Management paid a Utah cattle wrangler $966,000 to collect your cattle and then the -- with the idea of auctioning them off, and then the governor of Utah said, I request they not come here. Is that true, that the BLM spent $966,000 to take your cattle for what they claim is a million-dollar bill that was likely $100,000 or $200,000 to begin with?

CLIVEN BUNDY: Yes, I do have a receipt or a copy of that contact. It was for $966,000. I also understand they spent -- had another contract or at least was going to pay the auctioneer $300,000. And now I also know they had their army here, and they were getting room and board and overtime pay and pay and all of the things that expensed. So I would say if they spent a million dollars on gathering my cattle, they probably spent another $2 million or $3 million on setting up this operation.

HANNITY: Well, and Ammon, I guess this goes to the heart of it here because what we've always been talking about is the government fighting over land that they don't need for a hospital or a road or a school, and the land is going to be sitting there anyway, and all the cows are doing is eating and maybe going to the bathroom on it. They said originally this was about the desert tortoise. How did we get to this point where the government sends hundreds of people in there? There seems to be a total lack of proportionality in this.

HANNITY: Well, remember, they said about Major Hasan at Fort Hood that it was a case of workplace violence, and he was screaming Allah-u Akbar, and yet they're calling you and your supporters domestic terrorists, or comparing you to them or wannabes.

Ammon, what's your reaction to all this and especially the money that they're paying to round up the cattle and then maybe auction them off?

AMMON BUNDY, SON: Well, Sean, I just want to make sure that we stand that this is a state sovereignty issue. The states have the right to control and to govern this land, and the federal government doesn't want to give that up. And that's what this is about, and that's where we stand. This is state land, and therefore, the federal government has no right to fine or to say they can rent this land to anybody within the land. So...

HANNITY: Well, there's so many other...

HANNITY: There's so many other issues, then, surrounding your ranch, rounding up your cattle and sending in snipers and agents to the tune of 200. Arden, let me ask all of you this last -- last question. I keep hearing, people keep writing me that there is a belief on the ground where you are that the federal government -- that you all think that there's a plan on their part to kind of surprise you and maybe arrest you. Do you believe that's going to happen? Arden, we'll start with you.

HANNITY: Yes. Cliven, your reaction to what you think's coming?

CLIVEN BUNDY: Yes, I don't know. It seemed like Harry is along the side of the civil war. I think he's going to make a lot of noise. I'm calling on the United States Congress to pull Harry in and straighten him out. I don't think, as a Congress, and I don't believe you people want -- would call us terrorists, and I don't believe you should allow Harry to run free and loose anymore. His mouth needs to be kept quiet, and you people need to do it. It's not my job, it's your job to rein him in a little bit.

HANNITY: All right, we'll continue to do that.