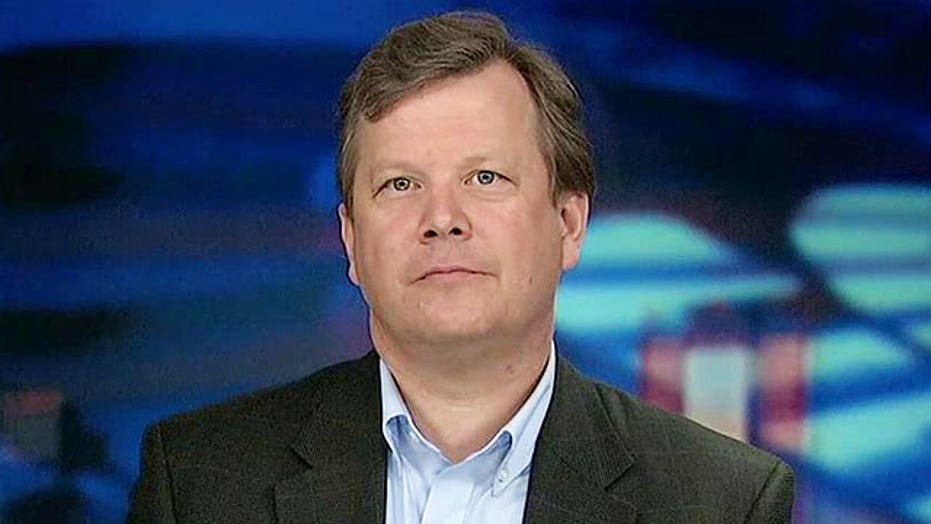 'Clinton Cash' author sounds off on Stephanopoulos' donation on 'Hannity'

This is a rush transcript from "Hannity," May 15, 2015. This copy may not be in its final form and may be updated.

SEAN HANNITY, HOST: Joining me now is the man that George Stephanopoulos went after on "This Week." He's the author of "Clinton Cash," now a New York Times bestseller, Peter Schweizer.

By the way, the New York Times, Washington Post did their own investigations based on the foundation of your book. They had hard-hitting pieces. He didn't take them on! He didn't disclose this!

Here are my questions for you. Do you believe ABC News really did an investigation, or do you think that George Stephanopoulos coordinated perhaps with the Clinton campaign here?

PETER SCHWEIZER, AUTHOR, "CLINTON CASH": Well, first of all, I know that the investigative unit of ABC News has done reporting on the book, and they have substantiated what I found in the book. And I would encourage people to look at the reporting by Brian Ross and Matt Mosk (ph) on this. They confirm the findings as it relates to speeches in Haiti.

HANNITY: Wait a minute. Do you suspect, then, that George Stephanopoulos was referring -- when he said ABC News has concluded this -- do you think he was basically relying on his relationship with the Clintons to say that?

SCHWEIZER: Well, I said, as far as coordination is concerned, I mean, you have the fact that he's a donor. You have the fact now it's coming out that he has participated in Clinton Global Initiative events as a panelist, as a speaker multiple times.  And it raises this question just about the coziness. I mean, you've got the finances. You've got these -- these meetings that he's attending. How you can expect to be objective, you know, is really highly questionable in that kind of environment.

HANNITY: I watched that interview, and I went on TV and radio the next day and I said this was -- this was a set-up interview! He was like their special pleader and advocate! And it did get noticed by a lot of people, and I said once a liberal Clinton hack, always a Clinton liberal hack!

Let me go back -- we went back and we found some video footage of some of the history when he was in the war room. This is from a documentary.  And I think this reminds people how close they have been for decades.  Watch this.

UNIDENTIFIED MALE: Now, Governor Clinton has a character problem, but I take it that your line...

UNIDENTIFIED MALE: Your line of counterattack is that...

STEPHANOPOULOS: Bill Clinton's passed his character tests throughout his life and throughout this campaign.

UNIDENTIFIED FEMALE: And you're convinced it won't work again?

STEPHANOPOULOS: I'm convinced that if they try it, we'll hit them back harder. (INAUDIBLE)

STEPHANOPOULOS: It is completely (EXPLETIVE DELETED). If you went on the radio and said that Bill Clinton is the father of an illegitimate black child, you would be laughed at. People would think you're crazy.

STEPHANOPOULOS: I guarantee you that if you do this, you'll never work in Democratic politics again.

STEPHANOPOULOS: I'm very proud to have done this. I'm just happy as I can be and I'm so proud. We won Nevada big. Governor, we're going to -- I mean, it's looking like close to 400.

STEPHANOPOULOS: We ought to be the -- I mean, the happiest man in the world. But I just got to tell you, I mean, I just appreciate this so much. This was the best thing I ever did.

HANNITY: What is your reaction this now? And what do you want from ABC? What would you like them to do? Because they said they're not going to reprimand him.

SCHWEIZER: Well, I think what ABC could do is let's do another interview on the Sunday morning show to talk about the contents of the book, so we actually get a chance for viewers to hear what is in the book.  That's the first thing that I would ask.

You know, looking at Stephanopoulos's past, I mean, the question to me is really, going into that interview, I kind of assumed that the relationship with the Clintons was in the past, that he had made this transition into the media and it was a different chapter in his life.

These donations, the fact that he's going to these events -- I mean, it just -- it raises all kinds of questions about that, and I think it's legitimate for people to look into them. If this was any other political candidate and a reporter doing this, you can bet that there would be some serious consequences for it.

SCHWEIZER: I think this is an issue that kind of goes to the issue of trust in the media. You know, if you're embellishing stories, obviously, that's a trust issue. But this is a very, very important one because you're talking about interviewing an author who's written a book that is critical and raises lots of questions about the Clinton Foundation. You're giving money to them, and you don't expose that and explain that to the public. I mean, the argument that he thought it was public and people would know about, you know, is ridiculous!

SCHWEIZER: It was public that I was a speech writer for George Bush for three months, but he felt it was important to mention it, and rightfully so, but he doesn't disclose his conflict. It just doesn't make any sense.