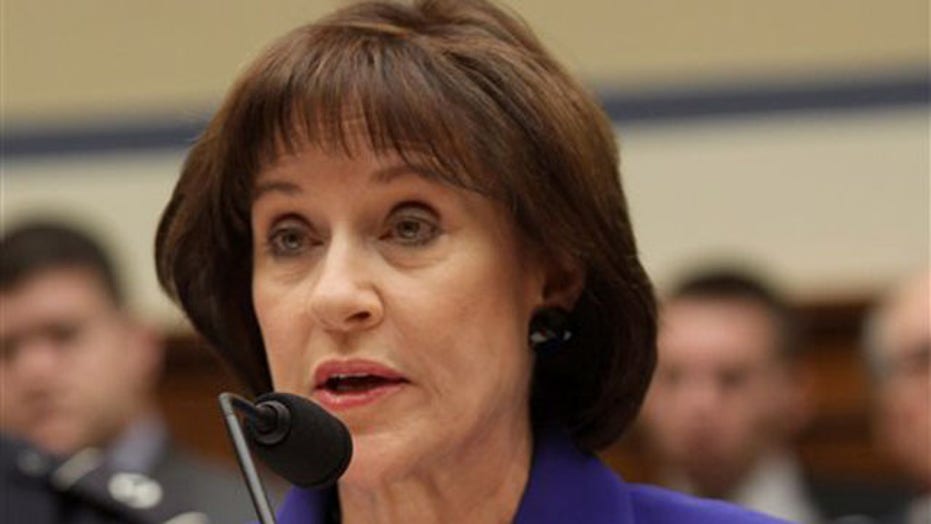 Cleta Mitchell on what victims think of lost IRS e-mails

How the latest developments will impact the investigation

This is a rush transcript from "The Kelly File," June 17, 2014. This copy may not be in its final form and may be updated.

MEGYN KELLY, HOST: Earlier tonight I sat down exclusively with Attorney Cleta Mitchell, she represents Tea Party groups targeted by the IRS, and she is not happy.

KELLY: Cleta, good to see you. And so, now we know that it's not just Lois Lerner whose e-mails have gone missing but those of six other key IRS employees. You believe this was a cover-up, tell us why.

CLETA MITCHELL, ATTORNEY WHO REPRESENTS TEA PARTY GROUPS: Well, I absolutely think that there's something crazy about this. I mean, first of all, there's all these federal laws that require that these government employees, documents and files and correspondents and e-mails all be maintained. As citizens, we all have the right to file a FOIA request -- the freedom of information request -- and we get to see.

KELLY: But they say. OK. But let me jump in. What they say, they were saved on a server, but the server only retained e-mails for six months, and then it would write over the tapes.

MITCHELL: Well, if that is true, and that is an egregious breach of trust and a violation of federal Law. And in fact, once the congressional investigations began, and once the lawsuits were filed by my clients and others, they had a duty to immediately notify Congress and immediately notify the federal judge who's assigned to handle these cases. They have -- in fact, not only did they not notify anybody, but they, we got a very snippy letter from Lois Lerner's attorney last September saying that when we say that litigation hold letter, which is standard in litigation. You say, don't destroy anything. And she basically wrote back and said, well, you don't have to tell me my job. Well apparently we do have to tell them their job. That -- I'm absolutely shocked that number one, that this is their process because that violates federal law. And number two, that they did not immediately notify the Congress, and then immediately notify the federal judge when these lawsuits were filed. This is just preposterous.

KELLY: Well, do you think that that is evidence. That this is bull -- that, I mean, because what I'm hearing from other lawyers who representing other victim and from those who are on the House Ways and Means Committee, who are outrage over this. They don't believe it, they believe that that server overwrites itself every six months, they think that this is all a big excuse. Especially now that we've heard it's not just Lois Lerner, but conveniently six other people who's e-mails cannot be produced.

MITCHELL: Well, I don't believe it. And I must tell you this, Megyn, I've been hearing from forensic experts across the country who've e-mailed me, I've been hearing from government employees who say that all of that is downloaded every night, it's constantly saved on the server and for them to now say we only keep it for six months? Let me tell you this, I had a client a few years ago, the IRS is going to revoke its tax exempt status, because they deleted their e-mails at the end of the calendar year, and the only way we were able to persuade them not to was to agree we would stop doing that. So now the IRS does it?

KELLY: They would have us believe that if you work at the IRS and you e-mail somebody, and then six months pass, that's it. If you happen to have a hard drive crash and it's not available on your desktop, no e-mail, that predates six months, you know, prior would be retrievable. That's insane. What -- how could the IRS ever do business like that?

MITCHELL: Well, they don't do business like that. That's the point. This is all false. I absolutely don't believe it. It is a sign of bad faith in the litigation, and I think it's contemptuous of Congress and the congressional investigations. I know -- I would note that today Congressman Issa has issued a subpoena for all of the backup documents relating to this. Because I think it is a scandal in and of itself. It is absolutely not credible.

KELLY: The Lois Lerner e-mail where she's first complaining about her crashed hard drive back in August of 2011 talks about how she's missing her lost personal files. It doesn't talk about losing e-mails, Cleta. Do you think that they are trying to sell us a pig in a poke here. You know what I mean, saying, look over here, she talks about lost personal files, oh, I'm telling you, that means all of her e-mails, oh, and by the way, it also means all the personal e-mails from six other IRS employees. That was one hell of a computer glitch.

MITCHELL: Let me tell you something, I think the person we all need to be looking at right now is the director of the FBI. Because surely the FBI, our government agency that's supposed to be able to protect us from criminal activities, surely with all of its sophistication that it could've gone and it should be going in immediately and pounding all of this, and getting and getting and conducting an investigation an independence investigation. But failing that, what we're gonna ask the court for is permission to bring in our own independent forensic experts to have access to these computers and hard drive.

KELLY: Let me ask you this, because right now it appears that the reason they're not producing these documents that do guys they say, back when Lois looked for the documents in 2011, the IT department says they couldn't retrieve them. There's been no satisfaction, has there, that an actual independent expert has come in and said, I'm telling you, they're irretrievable.

MITCHELL: That is absolutely correct. And that is what has to happen next. We need to get credible independent forensics experts who are not just the IT Department, somewhere in the bowels of the IRS, who are just doing probably what they've been told to do. I certainly didn't detect that Lois Lerner was particularly upset about the loss of her e-mails and files if you read those emails.

KELLY: Well again, if we lost personal files and who knows what that means. Now they want us to believe that e-mails all e-mails during the relevant times. The other thing is the Ways and Means Committee is now looking at the White House, saying, OK, we can't get communications from Lois to you from Lois, why don't you produce them, White House, if there are any. Why don't you Democratic senators produce them if there are any. Why don't you, Barack Obama's reelection team produce any e-mails who had been Lois Lerner during the relevant time frame. Quick answer on this one, do you believe they will?

MITCHELL: I don't believe they will without a court order, and I think that's -- we are at the point in time in this whole scenario where absent a federal judge ordering them to do these things and to follow the law, I think that they believe that they could avoid compliance with the law.