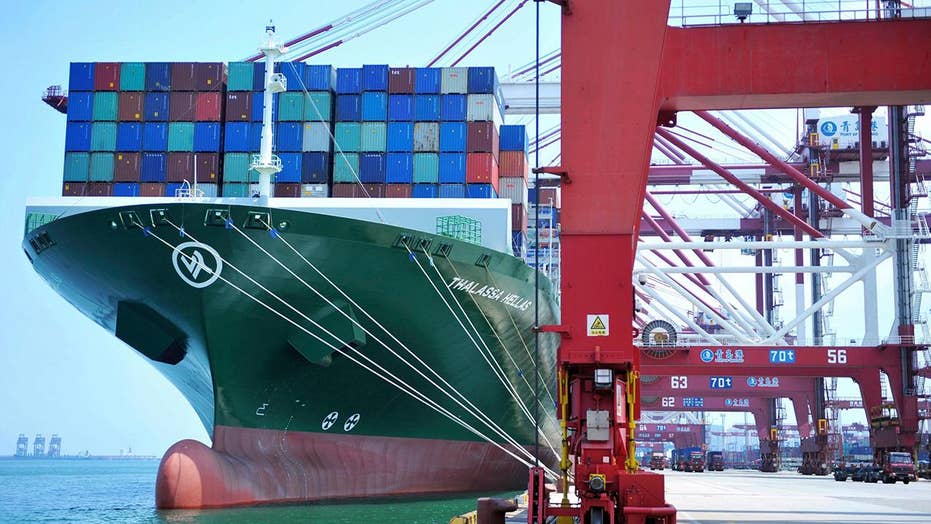 This is a rush transcript from "Special Report with Bret Baier," July 6, 2018. This copy may not be in its final form and may be updated.

PRESIDENT DONALD TRUMP: I respect China and I respect President Xi. But they've been killing us, $507 billion in trade deficits last year. Then you want to do something about it, you get attacked.

LU KANG, CHINESE FOREIGN MINISTRY: After the U.S. imposed unfair tariffs on Chinese goods, our tariffs on the U.S.' products also took effect immediately. All attempts of imposing unilateral pressure will be reward- less and no one should have allusions in this regard.

We'll start there. Let's bring in our panel: Steve Hayes, editor in chief for The Weekly Standard; A.B. Stoddard, associate editor at Real Clear Politics, and Mollie Hemingway, senior editor at The Federalist. The administration all along, Steve, has said, listen, we are going to level this playing field. And if it takes us doing this battle, we're going to do it. How is this playing?

STEVE HAYES, THE WEEKLY STANDARD: Yes, they were launching this unapologetically, I think. But if you go back and you look at the things that they said, they didn't expect to be at this point. You listen to Peter Navarro and the comments that he made in March. What he said was there won't be any retaliation. We are too big, we're too powerful. There won't be any retaliation. And here we are.

And we're here because you can't rhetorically start a trade war like this and then hope to control all of its various implications. And I think what we are see something Mexicans, Chinese, and probably soon to be others taking seriously what the president said, taking literally what the president said. It's common here to say we don't take literally what President Trump says. Our trade partners and our adversaries do, and that's what's happening here.

BAIER: The markets today seemed to be unfazed, whether they baked it in already or not. The Dow clearly had a good day today. And you can see the intraday trading there. If you look at the June jobs report, the economy added 213,000 jobs. And the unemployment rate ticked up, but in part because more people were into the looking for a job, back in the markets. Mollie?

MOLLIE HEMINGWAY, THE FEDERALIST: Just on this trade war issue, I do think that it's important to remember that China has had for many decades a practice of unfair trade. They are a huge market but they also have state control of their industries. And they kind of had the best of both worlds. They have these barriers that they set for other companies. They steal people's intellectual property. And a lot of people haven't really done anything about it. Now we are going into this where we are apparently going to try to deal with it.

What's challenging for Trump is he is not just trying to take on China, which is a major entity that does need to be taken on. He's also taking on allies. And there is no question that you renegotiate all sorts of trade agreements. But it's very difficult to fight a multi-pronged trade war when really everybody should be focused on China and their unfair practices.

BAIER: One last graphic, here, A.B., and just give me the sense on the Hill. The economy changes since President Trump took office. GDP growth, unemployment rate we just mentioned, consumer confidence is up. Average hourly earnings, the administration would like to see that higher but that's going up as well. Overall pretty good, churning along. Is it being squelched, is it being hit by some of this tariff talk.

A.B. STODDARD, REAL CLEAR POLITICS: The members who are opposed to tariffs who are Republican have been asked for patience from the administration. They were told, as Steve mentioned, that this was just a tactic. It was a negotiating start, but that it was going to -- it was going to provoke a response and better behavior. There's going to be a waiting period in which they will continue to buy the argument that it's a negotiating tactic that's going to work, and then they are going to push back. And we will see how long that is.

They have already seen at home a lot of destabilization, disruption for prices, for flows through ports, for inventory, for jobs, a lot of things across the board. And so they will give this a little bit more time. But they are, as you know, opposed to this, and very worried about its effects. Also, as you see, gas prices higher and interest rates higher and other things that start to -- people's healthcare higher begin to really dig in to people's cost of living.

BAIER: So far when you poll people in the middle of the country, some of these farmers are hanging with the patience part, but they are not feeling the real pain perhaps yet.

I want to take you to the Montana rally last night. You saw it here. The president on Elizabeth Warren.

TRUMP: She has based her life on being a minority. Pocahontas. Now even the liberals are saying take a test. He will take that little kit and say -- but we have to do it gently, because we're in the Me Too generation. And we will say I will give you a million dollars to your favorite charity, paid for by Trump, if you take the test and it shows you are an Indian.

BAIER: Take the DNA test. Steve, I saw on a lot of channels today heads exploding over this rally. This was Donald Trump in candidate Trump flavor, but he did say some things that really stirred up a lot of folks.

Vladimir Putin is an adversary. I would call him an enemy. He's actively undermining the United States, trying to affect our elections now. We know that he tried to affect our elections in 2016. He's destabilizing the Middle East. He's making a mess in his own backyard and doing all of this to hurt American interests, or much of it to hurt American interests. Vladimir Putin is not fine. I think it's unwise for the president to say that, setting aside the debate about collusion and the Robert Mueller investigation.

BAIER: We're getting ready for this summit in Helsinki, Finland. By the way, SPECIAL REPORT will be there with special shows around that summit, meeting between President Trump and President Putin. To that point, Mollie?

HEMINGWAY: They are a challenge to deal with, and Vladimir Putin is not a good guy. It's also true that we really need to be focused on Asia right now and not fighting 20th century problems. And it would be nice in general to have the president speak more against tyranny. It's not his style, and he seems laser focused on understanding that our main challenges are in Asia.

BAIER: A.B., I have a feeling I know what you are going to say, but he also took shots at 1,000 points of light, George H. W. Bush, John McCain, and obviously Democrats were a big target as well.

STODDARD: I think his lounge act is getting a little old. But if it actually means that he turns out voters in a midterm election when he is not on the ballot, and these voters turn out and defeat Jon Tester and all these states that he goes, states that he won that Hillary lost where Democrats are defending their seats, then there is some point to it. This is an exercise, we don't know the result because he is not campaigning for himself anymore. I think picking on John McCain and George Herbert Walker Bush is ghastly. We'll see if a portion goes out to the polls for other Republicans as a result of these routines.