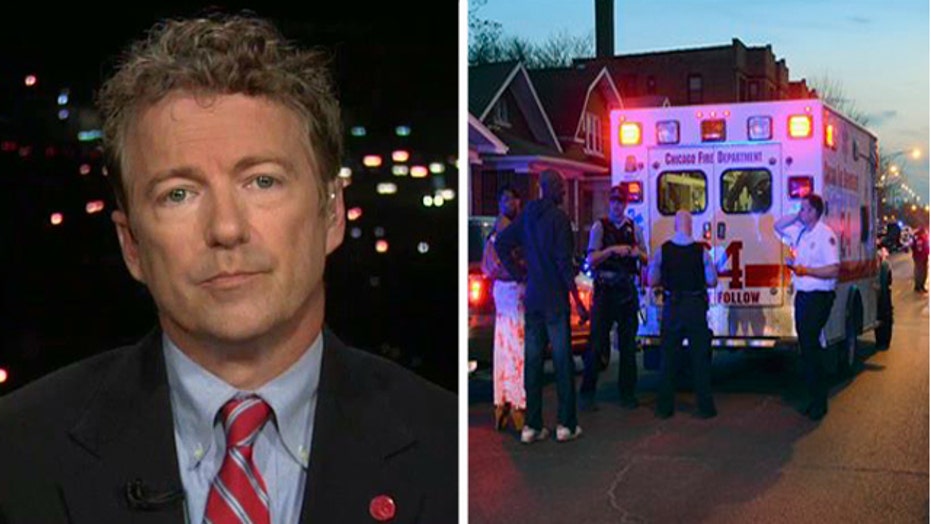 This is a rush transcript from "The Kelly File," April 22, 2014. This copy may not be in its final form and may be updated.

MEGYN KELLY, HOST: Developing tonight, a deadly and violent holiday weekend in Chicago raising new calls for gun control. At least eight people were killed and another 40-plus injured in a string of shootings in the Windy City. Among the wounded, six children. The sale of guns is now completely banned inside Chicago city limits. But the head of the Police Department says it's not enough.

GARRY MCCARTHY, CHICAGO POLICE SUPERINTENDENT: We need help with the gun laws. Because, you know, the national averages for gun violence, we are way above it as far as murder by gunshot goes.

UNIDENTIFIED MAN: One of the things that we also need to do is obviously change our gun laws to make sure that our strategy of more police on the street -- kids, guns and drugs off the street, is as effective and coordinated as we can be.

KELLY: Kentucky Senator Rand Paul is live in Chicago tonight, he's there for a school of choice event which we'll get to in a minute. But let's start with this, senator, because the city of Chicago was under siege as recently as about a year ago. They seem to be going a little bit in the right direction. And then came this weekend which was just devastating. And now they blame the guns. Your thoughts?

SEN. RAND PAUL, R-KY.: I think we do have a problem. There is this horrific violence. And it's hard to get your mind around it. But I think it's more of a sickness of the spirit than it is actually ownership of guns. In fact, if you look at the rules and the laws, the cities that have the most significant gun control seem to still have the highest violence.

So, yes, there is a problem. There is mental illness with some of these shootings. There is also just sort of a thuggishness that's out of control that no longer knows right from wrong. But it's something really maybe even beyond government. It's spiritual. People need to be taught right and wrong, there needs to be an influence in their lives and there has to be a police presence to deter crime. You know, it's not as simple as banning guns. Because they have tried that in Chicago, and they have tried that in D.C. and frankly, it hasn't worked.

KELLY: You know, O'Reilly has been pressing the president to take a leadership role on this on, you know, being a role model pushing for improved community activism and reaching out to, you know, inner city youth to try to set a good example and try to help with the right and wrong determination and lift them up out of poverty so that we don't see this kind of thing. Your thoughts on that?

PAUL: Well, absolutely. It's a complicated problem. It involves, you know, poverty, it involves unemployment. But it also involves lack parental guidance, lack of church guidance, lack of pastoral guidance. You know, there's a lot of things we can do. And, you know, in my community in Louisville, we just had some violence as well in Louisville, Kentucky. There are increasing police protection and police presence but there are also some organizers from the community who are saying -- going in trying to tell these kids, you know, there is another way. There is hope.

And, you know, that's one of the things about the school of choice event that I went to. It was an all girls' school. But the thing is, is that there is really hope. And you can just see in the eyes of these young ladies that they're going to be the leaders of the next generation. And there is hope for them. It's hard for me to imagine how people can oppose charter schools, can oppose school choice. I just can't imagine the people on the other side of this equation.

KELLY: What do you make of, you know, we were just talking in our first segment about the Supreme Court ruling about, you know, how some really want to push for affirmative action for certain people of color. And yet the others on the right have argued today in the National Review, as I pointed out, what we really need to do is improve education standards in K-12 education. And they believe those are being held back by, in particular, unions. A group praised by the left.

PAUL: Well, and to those who disagree with the ruling they should be asked, do you agree with charter schools? Are you for vouchers? In Chicago and in Illinois, we have been trying to get scholarships passed by the state legislature. But the Democrats have uniformly opposed scholarships for poor children to go to both public and private schools and for charter schools. And this is all being opposed. And that's the real answer. You want equality, education is the great equalizer. But you have to start at a young age. And you have to be for innovation. And so many of these people are so beholden to the establishment that they are opposed to it.

KELLY: Senator Rand Paul, thanks for being here.