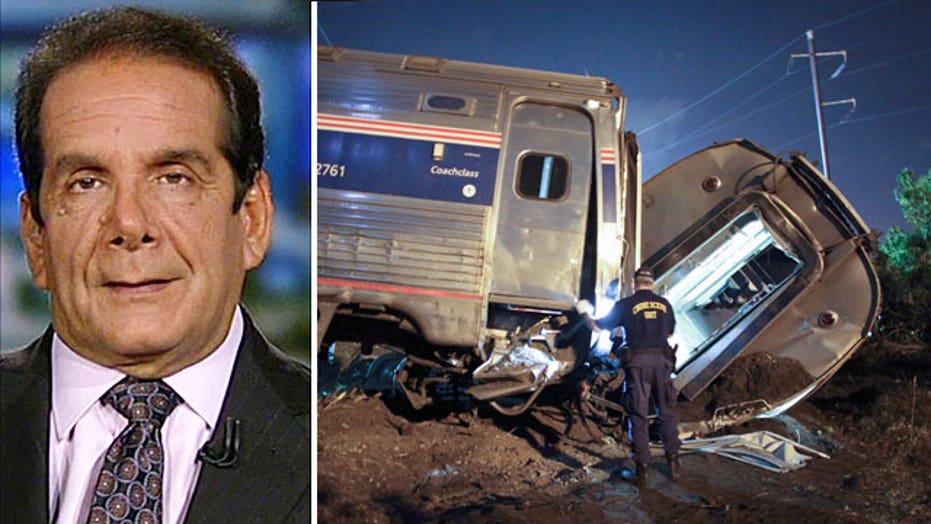 Krauthammer sounds off on the politics of the Amtrak crash

This is a rush transcript from "The Kelly File," May 15, 2015. This copy may not be in its final form and may be updated.

MEGYN KELLY, HOST: Breaking tonight, President Obama now joining the chorus of Democrats suggesting that spending money could have somehow prevented the tragic Amtrak train crash we saw in Philadelphia this week. The president's remark came just hours after investigators discovered an eighth fatality and despite the fact that the NTSB and other agencies are warning about rushing to conclusions on a cause here. Senator Chuck Schumer today specifically blamed this crash on a lack of funding and watch what happened as both Nancy Pelosi and John Boehner weighed in.

REP. NANCY PELOSI, D-CALIF., HOUSE MINORITY LEADER: I just don't know why but the Republicans have been very much against Amtrak for a very long time.

REP. JOHN BOEHNER, R-OHIO, SPEAKER OF THE HOUSE: Well, obviously, it is not about funding. The train was going twice the speed limit.

KELLY: Moments ago, I spoke with Charles Krauthammer, a Fox News contributor and author of "Things that Matter," a New York Times number one bestseller which he has just updated.

Charles, good to see you.

KELLY: So, it's Republicans hate Amtrak. That's what caused the crash.

KRAUTHAMMER: Well, I mean, Ray LaHood, the former Transportation Secretary under Obama blamed it on crumbling infrastructure and of course we need more money. You know, how stupid do they think we are? This is a train going 102 miles per hour in a 50 mile zone. This is not a crumbled problem. This is a speeding problem. This isn't an infrastructure problem. This is a personnel problem. But the knee jerk reflexive reaction of any democrat of anything that happens in the country is throw more money at it. You get the riots in Baltimore, the reflexive answer is throw more money at the schools. You Baltimore has a second highest per capita spending of any urban area in America on schools and they're a disaster. You get hurricanes and tornadoes. What's the democratic answer?

Oh, that's global warming. Climate change. You need more windmills.  They have a single answer to everything. Raise your taxes, spend the money. And the other thing that's really quite remarkable about this, it was only six years ago, not 100 years ago that the democrats passed the largest infrastructure spending bill in the history of the galaxy. Even the Klingons never spent $830 billion on infrastructure, that was going to rebuild America. Remember the roads, the ports? The airports, the bridges. Where did that money go?

KRAUTHAMMER: But they're always at the trough again for more money for infrastructure. It shows a brain dead liberalism that has no other answer to every other question.

KELLY: And, you know, to steal a phrase that you use very often, how cynical to run out there literally before they've even found all of the bodies and start using this as a reason for more money, as evidenced by a remarkable exchange that happened on the House floor between Mike Simpson and Steve Israel. Watch this.

REP. STEVE ISRAEL, D-N.Y.: Last night we failed them.  We failed to invest in their safety.

REP. MIKE SIMPSON, R-IDAHO: You have no idea, no idea what caused this accident. And to use that as a means of supporting the last amendment, support it if you want to. But don't use this tragedy in that way. It was beneath you.

KELLY: And Steve Israel doubled down, he did not back off.

KRAUTHAMMER: Look. This is -- I think it is scandalous and it is unseemly. It is shameful. When you have an accident and you immediately rush to use it for no reason whatsoever, no logical reason. As a way to promote your agenda. It happens every time there's a crazy shooting. You know, the Loughner shooting, the guy who shot the congresswoman and several others in Tucson. Immediate thing was, you know, a gun control, of course.  Or, that conservatives had created a climate of hate in the country. The guy was psychotic. It was obvious from the first hour. But they always -- and they do it in a way that truly I think is disgraceful. You don't use the dead for means like that.

KELLY: Uh-mm. And you know what else? If they had a leg to stand on, because last night on the program we talked about this positive train control, something that can be installed on the tracks to perhaps override an out of control engineer driving a train. And we said, OK, well maybe, maybe they were too slow to get that installed. But as it turns out, not only had that been approved for this specific area of the track but the only reason it hadn't been installed yet we found out today is because of the FCC, there was a bandwidth problem that they were trying to work out.  It had nothing to do with funding and Amtrak came out today to say that and still they proceed.

KRAUTHAMMER: Look. The president did the same thing. In a slightly more subtle way where he said, we don't know, I don't know the cause of the accident. He said this very early on. He said, but what I do know is we have to invest in infrastructure. This was not a pothole issue. This was not a bent track issue. What this was was misjudgment on the part of the conductor, we'll have to find out exactly why.

KRAUTHAMMER: But it is a reflection. You know, Pot Moynihan, who was a great social scientist and was a democratic senator wrote in the late 1970s that liberalism had been -- that the conservatives, republicans, had become the party of new ideas. This is after 50 years where it was the liberals with the new deal and the great society but they went brain dead and he was saying, against his own party, that they were reacting reflexively resting on their laws and giving the same answers of the mid- 20th Century. And Moynihan was right when it comes to getting real answers to reforming the welfare state, updating its structures, you are not getting that from liberals like Pelosi who say, I won't touch a hair on the head of Social Security when it needs reform. We all know it needs reform and it is the same. Anything happens, throw money at it.

KELLY: Let's talk about your book before I let you go. Because it sold more than a million copies. There's a huge interests in it. And you have now updated it for the paperback edition. How? What is new in there?

KRAUTHAMMER: Well, what I did is the hardback, I closed it. I wrote the last part of it in August of 2013. So what I did for the paperback is I added the writings I've done since then and it is all on the Obama administration. In the hardback, Obama is featured in an article or two.  But he's not the focus because it's about the 30 years of American history.  But since we have now had six-and-a-half years under our belt, I have now added some columns, thoughts about the Obama legacy, the Obama presidency and it's -- I could say it's rather critical.

KELLY: There's a shocker. Charles, it's great to see you. Good luck with it.

KRAUTHAMMER: My pleasure. Thank you very much.