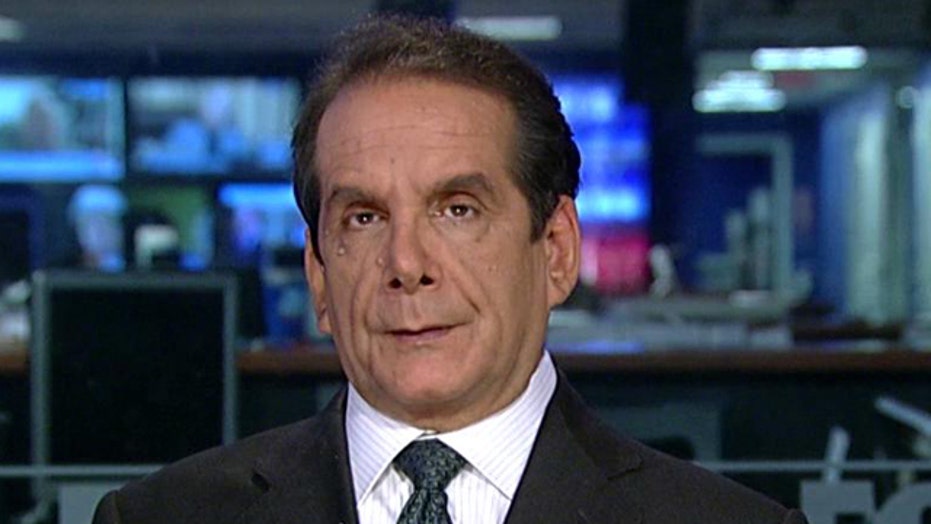 This is a rush transcript from "The Kelly File," April 4, 2014. This copy may not be in its final form and may be updated.

JOHN KERRY, SECRETARY OF STATE: There are limits to the amount of time and effort that the United States can spend if the parties themselves are unwilling to take constructive steps in order to be able to move forward.

MEGYN KELLY, HOST: That was an attempt at tough talk by Secretary of State John Kerry, who got a lot of attention for his remarks that sounded like he's throwing up his hands over the progress of Mideast peace negotiations. It came after Mr. Kerry met with both Palestinian and Israeli leaders this week in an attempt to broker a deal with just weeks left on a nine-month negotiating table that is almost at its conclusion and not looking good.

Charles Krauthammer is a syndicated columnist, Fox News contributor, and author of "Things That Matter," number one on the New York Times bestselling list for 23 weeks now. Charles, you are not a fan of how the secretary of state has handled all of this. Let me start with this -- could anyone have done better with these two sides given how diametrically opposed they are?

CHARLES KRAUTHAMMER, FOX NEWS CONTRIBUTOR: Of course not. Nobody else could've done better. But just about every other sentient observer of the Middle East would have understood that before Secretary Kerry began his crusade would've known nine months ago when this was self-initiated by him that there was no way this would ever succeed. And the worst thing for an American secretary of state to do is to make a fool of himself in front of the world, engaging in a quixotic endeavor that everybody understood was impossible.

There's an old saying in the Middle East, he whom the gods would destroy puts in his head that he will solve the Arab-Israeli dispute. And this was a point in time when Kerry kicked this off, when there was zero indication from either of the parties that there was any desire or any conditions, any ripeness to these negotiations where they might even lead to a conclusion.

KELLY: Why did he do it?

KRAUTHAMMER: That's the problem. Why did he do it? I mean, you know, what do you think I am? A psychiatrist? Look for John Kerry. I mean, I would give you what seems to be the surface explanation. Either he thought, well, I can't solve Egypt, I can't solve Syria, I can't solve Lebanon, Jordan is inundated with refugees, Iraq is a mess, Iran is going nuclear, and I can stop them, so let me try to do something in the one area that really, right now is not in crisis and does not require administrations. Or he thought I deserve a Nobel Prize. This is the last job I'm going to have in my career. This is the thing that if I get it, will give me a Nobel Prize and I'll go for it.

But it doesn't make sense at any level. That's the problem, not that he failed. That was utterly predictable from the very beginning.

KELLY: He comes out.

KRAUTHAMMER: But that he initiated this.

KELLY: He comes out now and expresses, you know, exasperation. We have better things to do here in the United States, and there's only so much I can do when the two sides won't come together.

KRAUTHAMMER: Well, look, the two sides actually talk to themselves all the time. They have to live on the ground together and they do. And they have this relatively accommodating status quo which is not a satisfactory one. But the problem is this -- the Palestinians since 1947 have never accepted the reality of a Jewish state in their midst. Mahmoud Abbas, the leader of the Palestinians, says openly he will never accept the Jewish state. And he will never conclude a final agreement that ends the conflict once and for all, meaning -- and this has been true of every Palestinian leader since 1947 -- they're willing to sign interim agreements, but never one that accepts Israel as a reality in their midst. And that ends the conflict.

And now, once you have those conditions and you've heard that from Abbas, and he's said it publicly, then you do not launch negotiations that will end the war between them, because it makes no sense.

KELLY: So far, so bad. Charles, good to see you.

KRAUTHAMMER: It's a pleasure, Megyn.