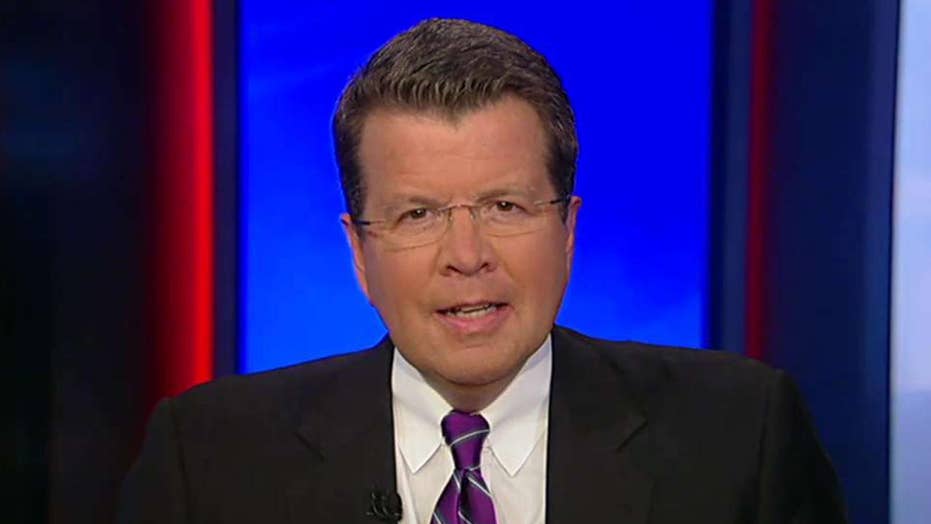 Cavuto to Trump: Tread carefully when treading on the GOP

The president should keep the allies he's got on his side

I can take the heat, so, guess what? I'm going to stay in the kitchen. I know that disappoints some of you. But I think, since this issue of fairness comes up a lot, I should explain myself yet again now.

I'm neither a never-Trumper nor an always-Trumper. I cover the good. I cover the bad. I figure, as I've often said here, I do three hours of programming a day between the news channel and Fox Business, and more on weekends. I've got plenty of time to cover both, and I do.

Because I can see the good and the not-so-good in the president,

And I try to cover him with the balance he deserves….the balance I think you deserve.

I know the president well. I've covered him for more than 30 years, I know it doesn't look like it, but it's true.

Back to his real estate days, his casino days, his media celebrity days, all of those days.

I think he's a brilliant businessman and I think I was among the first to say, when he first announced for president, that he had a very good chance of becoming president.

I said he shouldn't be dismissed, even though my comments were by and large much dismissed.

But there was something about him I learned from those business days that I saw playing out in his favor in his early presidential campaign days.

Despite the criticism he gets now, my own included, he was very focused then.

I saw it for myself, moderating two Fox Business presidential debates. I think he easily won both…not because he was necessarily the smoothest, but because he was the feistiest. He got it, and he won it.

The others simply did not.

That was then. There is a difference now. He's president now.

The anger that got him here might sustain him at those rallies. It won't necessarily win him legislative victories in Washington. And that's the big difference.

He's got big ideas. Big goals. But as much as he recoils at the system, he has still got to work within the system.

As I said, it's the only system he's got.

And those Republicans who are ticking him off for not getting the stuff done he wants, they're the only friends he's got.

So he should tread carefully treading on them.

At least in public.

By all means, air your grievances in private.

God knows LBJ did, and countless others.

Be angry about what didn't happen.

But looking at Mitch, be grateful for what did happen.

Namely, Neil Gorsuch. The Senate leader got that one through, and like I said, pulled a lot of strings, to make sure that Gorsuch did get through.

That doesn't make me an apologist for the senator or the system…just a fair and balance observer of the system.

Contrary to popular opinion, and yes, mainstream media opinion…the president is getting a lot of stuff done.

These are the metrics by which, fairly or not, we measure a president's success. He's got good data on all. Would it kill anyone in the media to even give it a brief mention, at all?

But the president risks stepping on his own good news when he gets side-tracked by these other, to me, pointless distractions.

The president's quite right to say many in the media hate him.

But he feeds the beast going off on these tangents that ultimately only hurt him.

His economic agenda is sound.

The promise it holds for the economy is real.

But he can't make it happen if he goes after the very Republicans he needs to make it real.

I often hear the president's base doesn't care.

But they sure as heck do care if all those promises don't get fulfilled.

I suspect the president knows this, or he wouldn't have made all the staff changes he has. Or changed his mind on Afghanistan after talking to his generals the way he did.

I have no agenda. I'm neither pro-trump nor anti-trump. I am pro-moving the ball. I'm anti-leaving the inbox piling up.

Ronald Reagan famously said that he would rather get 80 percent of the loaf than no loaf at all. So he broke bread with Democrats and got stuff done.

I don't think it's a stretch for this president to try to work with Republicans and get at least some stuff done.

Because he ain't gonna get the help from the other side.

Best he should keep the allies he's got on his side.

That's the only way he's going to make deals.

And who would know that better than the guy who literally wrote the book on the art of the deal.


Neil Cavuto serves as senior vice president, anchor and managing editor for both FOX News Channel (FNC) and FOX Business Network (FBN). He is anchor of FNC's Your World with Cavuto - the number one rated cable news program for the 4 p.m. timeslot - as well as the FNC Saturday show Cavuto on Business. He also hosts Cavuto on FBN weeknights at 8 p.m. In addition to anchoring daily programs and breaking news specials on FNC and FBN, Cavuto oversees business news content for both networks and FNC's weekend business shows, including Bulls & Bears, Forbes on Fox, and Cashin' In. Click here for more on Neil Cavuto.