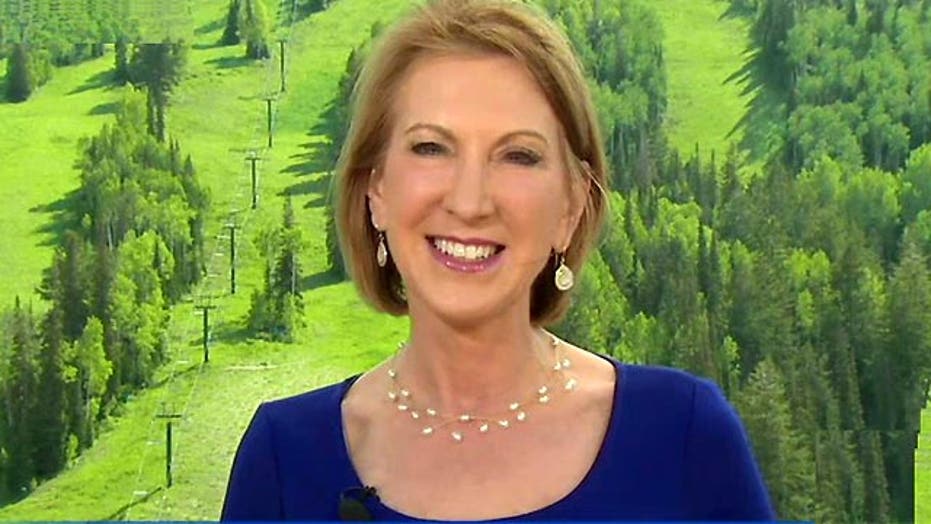 Carly Fiorina on how she intends to help the poor

GOP presidential candidate sounds off on the growth in poverty under Pres. Obama and gives insight on a plan to help

This is a rush transcript from "On the Record," June 12, 2015. This copy may not be in its final form and may be updated.

GRETA VAN SUSTEREN, FOX NEWS HOST: She wants to be your next president. Former Hewlett Packard CEO and presidential contender, Carly Fiorina, joins us. Nice to he see you, Carly.

CARLY FIORINA, FORMER HEWLETT PACKARD CEO: Great to be with you, Greta. Thanks for having me.

VAN SUSTEREN: Carly, today, President Obama went to Capitol Hill for the Trade Promotion Bill. He went there to rally Democrats because a number of Republicans are in favor of this bill including Chairman Paul Ryan. He went to the Hill to get the Democrats to join and they didn't -- they didn't rally with him. They didn't join. So it's gone down. What happened with the president?

FIORINA: Well, it's interesting. You know, I'm a big proponent of free and fair trade, but I also wanted it know what was in this deal. And I think this president, at least from my point of view, has demonstrated too many times that he sets out lofty goals and then devil in the details and the details are very different. I can't explain what happened on the Democrat side, other than clearly, you know, the president, I think, hasn't really invested in relationships on the other side of the aisle. And so, when he called this time, they didn't respond.

VAN SUSTEREN: Carly, I'm confident that the very rich will -- they'll be OK no matter what happens. The middle class are far greater concern for me and also the very poor people. The number of people on food stamps is mushrooming. It's now about 46 million people. If that gets larger, I think it's going to be even another financial -- it will be a financial pain -- a difficulty for the middle class. The rich will be fine. Do you have any plan to go into these inner cities and help these people and get these communities revved up?

FIORINA: Well, yes. And in fact, I gave a speech about this last night because we know that we have far too many people tangled up in webs of dependence. Poverty hits women particularly hard in this nation, actually, because so many children, 40 percent of children now are born out of wedlock. We have 25 percent% of families now headed by single moms. And so if we want to deal with poverty, we also have to deal with women. And when I mean -- when I say webs of dependence, we make it more difficult for someone to move ahead in their life to work harder and to earn more money. They risk greatly losing benefits.

So the truth is you will take more pay home and more benefits home if you are earning, say, $28,000, then if you get a promotion and earn $55,000. In other words, the incentives are totally wrong.

VAN SUSTEREN: But there are so many problems far deeper than to so many people in our population who want jobs who can't get them. I mean somebody's inner cities are on a really tough position. And it's so rare that Republicans venture into the inner part of these cities and see what's going on. I mean, how would a Carly Fiorina presidency reach out to them?

FIORINA: You know, I talk a lot about entrepreneurship, Greta. One of the reasons I have to do that is because I have seen it work. I have served as chairman of Opportunity International, largest microfinance organization in the world. We have lent $8 billion, $150 at a time. Why do I bring that up? Because entrepreneurship works to lift people up out of poverty and we are crushing entrepreneurship in this country. We're crushing it in the middle class. So we're destroying small and family-owned businesses which provide most of the new jobs in this country and employ half the people. But we're also discouraging entrepreneurship in these inner cities. And so it works.

When you give someone credit -- you know, when you are poor, it's hard to get credit. When you extend someone credit, which is what community banks can do, should do, except they're being destroyed by Dodd-Frank -- when you are give them tools, training and support, when you encourage them to move forward in their lives instead of encouraging them to fall back and to settle, then they have no future in their communities.

So we can do this. There are programs that work, but it means we have to fundamentally reimagine how we look at these welfare and benefit programs and it means first and foremost that we have to understand that every single individual has God given gifts. It doesn't matter if they are poor. It doesn't matter if they're sitting in the inner city. They have God given gifts. They have potential. They need encouragement and helping hand, perhaps yes, but they have gifts that can create possibilities for them.

VAN SUSTEREN: All right. Let me tease you and perhaps Senator Marco Rubio. He tweeted a picture today he got at the same conference you are playing flag football and you are speaking about the word feminist being hijacked by the left. Were you invited to play flag football with the men today? You are the only woman out there today as a presidential contender.

FIORINA: Well, actually tomorrow my activity is to lead a hike into the mountains at 6:30 in the morning. So, all of us presidential candidates were given an activity. Lindsey Graham was leading skeet shooting. Marco Rubio is doing flag football. I'm doing the hike tomorrow.

VAN SUSTEREN: All right. Well, we'll see who comes out first on that hike. Anyway, good luck. And when you get back to Washington, come sit on the set with me. Thank you, Carly.

FIORINA: I would love to, Greta. Thanks for having me.