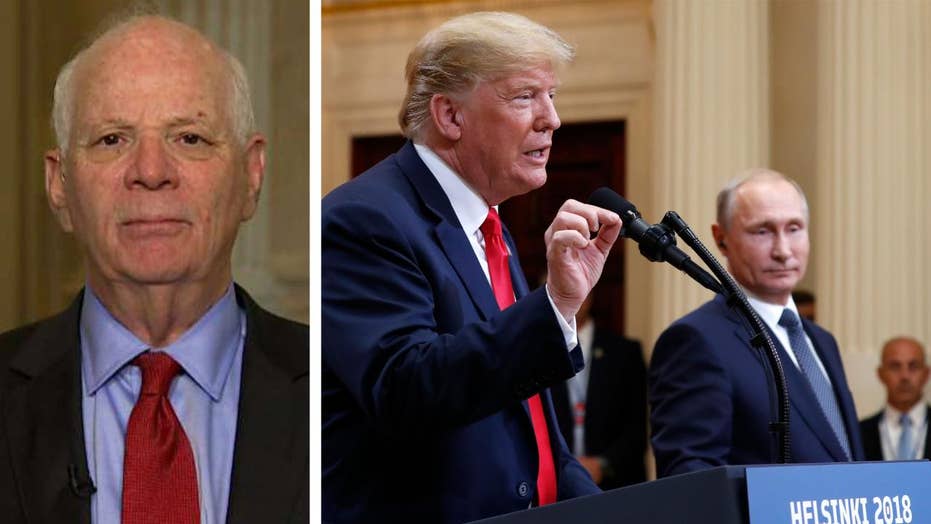 Cardin: Putin heard what he wanted to hear from Trump

On 'Your World,' Democratic senator from Maryland says the damage has been done to America's national security and leadership by the Trump-Putin summit.

This is a rush transcript from "Your World," July 17, 2018. This copy may not be in its final form and may be updated.

CAVUTO: What do you make of this?

CARDIN: Well, on the world stage yesterday, Mr. Putin heard exactly what he wanted to hear.

And when you give Russia an opening, you give Mr. Putin an opening, he will move on it. We saw that 10 years ago, when they moved into Georgia, blocking George’s entry into NATO. You saw that when Mr. Putin invaded Ukraine. He interfered in our elections and believes now that he can continue to do those types of activities, and the American president is not going to take action.

So, I think the damage has been done to America’s national security and leadership by that summit. We don’t know what happened in the meeting, in the room, one on one. But it’s clear from the news conference that Mr. Putin was happy with the meeting.

CAVUTO: All right. Does this change anything, though? The president acknowledged that he might have misstated himself. Others are saying he just pulled a 180 here.

But does it change anything, Senator?

CARDIN: I don’t think so.

When you take a look at the totality of what the president said, including what he said in Helsinki, he’s siding with Mr. Putin. He’s basically saying the relationship between these two countries are so important. He’s not treating Russia under Mr. Putin as an adversary.

And that’s wrong, because we know that Mr. Putin will continue to act against our national security interests, unless we’re prepared to stand up to him. And the president certainly didn’t show that strength at the summit meeting in Helsinki.

CAVUTO: Well, some have wondered what else could be going on here.

Nancy Pelosi, I don’t know whether you’re in agreement with her on this. She said: "His total weakness," referring to the president, Senator, "in the presence of Putin proves that the Russians have something on the president personally, financially or politically?"

Do you believe that?

CARDIN: Well, I can tell you, listen to Mr. Putin’s response to a reporter’s question as to whether there was anything on President Trump.

And when you listen to Mr. Putin’s response, it doesn’t give you any comfort level. I don’t know. I mean, you’re dealing with a KGB operative, former operative. They use tactics that are extraordinary.

And that is why we were concerned on the one-on-one meeting in Helsinki, and we just don’t know. What we do know is that the Mueller investigation...

CAVUTO: But would you still have advised the one-on-one meeting?

CARDIN: No, I wouldn’t have, I think, after the indictments, unless it was set up clearly to deal with resolving Russia’s engagement here in the United States, so that it was very clear, not only to Mr. Putin, but to the international community, that the president was meeting in order to file the grievances and to get change of behavior.

If that was clear, that’s one thing. But that’s not how this meeting was set up.

CAVUTO: Well, we don’t know what was done behind the scenes, though, to be fair, right?

CAVUTO: Do you worry, though, Senator?

I mean, that a lot of people can look at the Obama administration’s zeal with going ahead and then normalizing relations with Cuba. Some people said, well, that was long overdue. We don’t know what greased the skids for that. But it is what it is. Relations are normalized, all of.

That there are some times and some conditions where you meet with someone you don’t flip over to advance a goal, in this case, with the president wanting to get past this, deal with some other thorny issues, try to remind the Russians not to do this again, if that’s the case, again, to take him at his word, sir.

CARDIN: Well, there -- I agree with that strategy. You want to meet and talk and set up a means of which trying to resolve issues.

But you have to acknowledge what Russia has done in recent years is so much against U.S. interests, that you got to make that clear. You got to make it clear that the attack on our country in 2016 is unacceptable, their invasion of Ukraine is unacceptable, we will never recognize Crimea’s annexation by Russia, what they’re doing in Syria in supporting the Assad regime and war crimes.

That needs to be the framework for such a meeting. And if you go into the meeting saying, all I’m trying to do is improve a relationship that’s been terrible over a long period of time, you give the clear indication that it’s going to be acceptable what Mr. Putin has done.

CAVUTO: Senator Cardin, thank you very much for taking the time, sir.