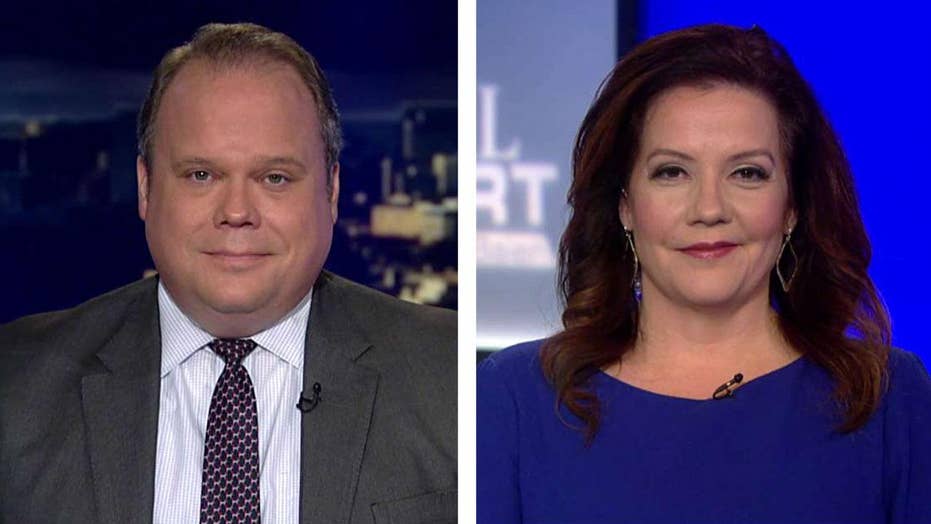 This is a rush transcript from "Special Report with Bret Baier," November 18, 2019. This copy may not be in its final form and may be updated.

REP. JEFF VAN DREW, D-N.J.: What I'm hearing out in the street is with most people is they're kind of tired, they're kind of worn-out, they're kind of bored, where we spend millions of dollars, in my opinion, tons of money, tons of time, tons of hurt, fracturing the nation apart. I haven't seen this to be a good thing.

BRET BAIER, ANCHOR: Congressman Van Drew from New Jersey, a Democrat, talking about what he's hearing on the streets about the impeachment process. This week, a big week in the impeachment hearings. Tuesday, four witnesses, including Lieutenant Colonel Alexander Vindman, Director for European Affairs at the National Security Council, he was on the call. Wednesday is really the biggest of all of the testimony. And that is Gordon Sondland, the U.S. ambassador to the European Union. Thursday, Fiona Hill. And, also, they just added David Holmes, political counselor to the U.S. embassy in Ukraine. He is said to have heard this phone call between Sondland and President Trump. Meantime, we learn today, from Senator Lindsey Graham, that the Inspector General of the Justice Department, Michael Horwitz, will be testifying on December 11th about his report that is expected out in days. But we know December 11th is already on the calendar. So, that's something new we learned moments before the show.

Let's bring in our panel: Chris Stirewalt, politics editor here at Fox News; Mollie Hemmingway, senior editor at the Federalist; and Michael Crowley, White House correspondent for the New York Times. Okay. Where we are now and this set of hearings, Mollie, and how this affects, kind of going forward? You know, we've seen last week this is going to be a big week of testimony.

MOLLIE HEMINGWAY, THE FEDERALIST: Yeah, it's a big week of testimony except the issue keeps on being kind of complicated for people to follow. You have Republicans saying, "What we have here are a lot of bureaucrats who disagreed with the Trump administration foreign policy." And you have Democrats saying that something that was done was impeachable. I think there hasn't been a ton of interest in these hearings. I doubt that it will increase as days go on. And so, Democrats might be finding themselves in a little bit of a difficult pickle. And then, finding out about this IG report coming out, which is very interesting. We've been told for months it's coming out. But if it comes out and it shows that there was this bureaucratic resistance to Trump that engaged in nefarious behavior, that further helps his argument with impeachment.

MICHAEL CROWLEY, THE NEW YORK TIMES: -- is that he has already revised his testimony -- I mean, I think literally submitted a revision saying that he had recalled some facts that he had initially forgotten about in his first round of testimony. And since that time, we have learned -- or at least there have been accounts describing more conversations -- at least one in particular -- with President Trump, that Sondland has not volunteered to House investigators. This specifically is one that came out in testimony on Friday, in which Sondland allegedly took a call from the president in a Kyiv restaurant on his cell phone when there were two embassy staffers there. And by the accounts that were given to the House, the president said to Sondland pretty directly, you know, "We're -- I'm really interested in these investigations. What's going on with the investigations?" furthering the idea that this is really what the president's interest was in his Ukraine policy. So, will Sondland now say, "I forgot about that. I have a little more to tell you." Is there anything else that he's forgotten? That will be very interesting to watch.

BAIER: Which is why there's an evolution on the hearsay witnesses, and kind of a focus by Republicans now, to say there's just not a lot here, as far as illegality and impeachment-wise.

CHRIS STIREWALT, FOX NEWS: Well, we have a nice parallelism with the Trump Tower meeting from the Mueller days, which is, "Yeah, look, there was an effort to do a quid pro quo here." You heard it from Steve Scalise on Fox News Sunday. You heard it from Jim Jordan. Basically, it's like -- "Look, the money ended up getting paid. Why are you going to impeach a guy over something that didn't end up actually happening?" And I think that is a reflection on the part of the Republicans that the -- this is bunkum [spelled phonetically] stuff, wasn't going to work. Now they're going to say, "Look. Yeah, maybe there were conversations that were had that might not -- that most people would feel a little uncomfortable with, but the bad thing didn't happen. So, let's move on."

BAIER: I guess the question is, if this IG report comes out as we expect it now, right before that December 11th, testimony, does it, in essence, bolster Republicans even further to stand with the president, if it's this painted picture of the beginning of the Russia investigation that has a lot of question marks?

STIREWALT: Well, look, this is what the Republicans have been waiting for, and they're hanging a lot on this. There's a lot of expectations around this. It needs to deliver. I suspect there will be a lot of unhappy people, and I suspect that people like McCabe and others, Comey and others, are going to be very unhappy when all is said and done.

BAIER: I would point out, there's the IG report that deals with the FISA allegations, and then there's John Durham, the U.S. attorney from Connecticut, who's also doing a broader look at the beginning of the Trump probe.

HEMINGWAY: Right. As important as this Inspector General report is, it is pretty limited. It's just about whether there was abuse of the FISA process. This was the way that the Justice Department was spying on members of the Trump campaign, and how they convinced the court to allow them to do that. This has always been a question of either you had the Trump campaign colluding with Russia to steal the 2016 election, or you had some indication that there was some really bad behavior on the part of the Justice Department. And we have some indication -- we're going to get a little bit more -- about that bad behavior as it relates to the FISA abuse. But Durham is looking into all sorts of things in addition to that as well.

BAIER: We expect that to take a lot longer. I want to turn to 2020 very quickly. The new Iowa poll out has Pete Buttigieg up significantly, making a big jump. And you can see the up and down -- 16 points there. Michael, what's interesting, in the Iowa poll, number two, is the president's approval among Iowa Republicans. Still very strong at 85 percent, 76 percent saying they're definitely going to vote for the president.

Crowley: Yeah. I mean, President Trump, despite everything -- and you see these numbers nationally -- there are some, surprisingly to some people, high numbers in favor of this impeachment process relative to the baseline approval numbers. But having said that, those approval numbers for President Trump have been very consistent, remarkably consistent. In the Democratic field, you're seeing [unintelligible] -- I think this lead is going to change hands many times over, and I wouldn't get too excited about one poll. But it is very interesting, particularly to see a somewhat more centrist candidate moving ahead.

STIREWALT: Not good. You're saying that's not good.

BAIER: Not good. Behind Marianne Williamson. Not singling her out, but among African Americans --

STIREWALT: Pete Buttigieg is not going to win the South -- I think we can safely say that Pete Buttigieg is not going to win the South Carolina primary. But if I'm Elizabeth Warren, who just five or six weeks ago, people were talking about, "Oh, she can't be stopped; she's unbelievable" -- Pete Buttigieg, if he beats her in Iowa, if she loses New Hampshire to either him or Bernie Sanders, Elizabeth Warren is going nowhere fast. Biden leads in Nevada -- in the most recent polling in Nevada. He leads in South Carolina by a dowdy margin. It's hard right now for somebody to explain to me a good path for Elizabeth Warren today.