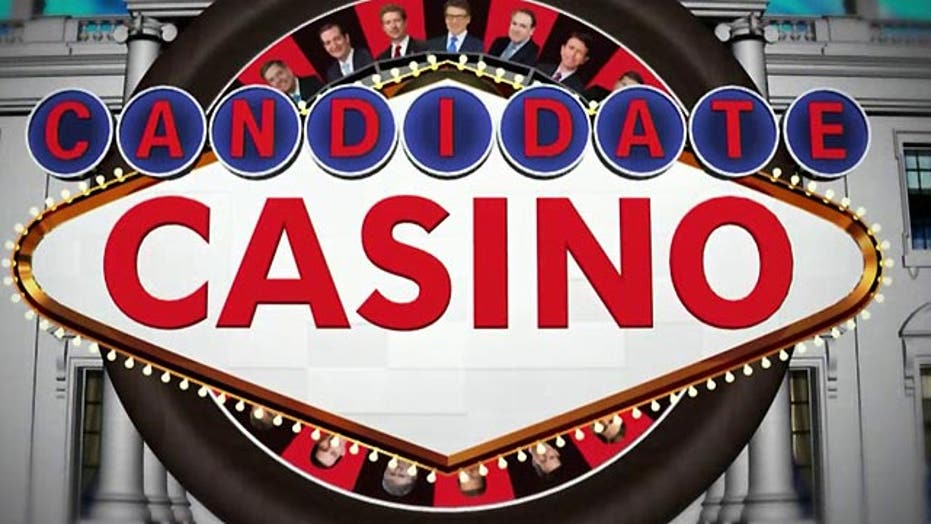 This is a rush transcript from "Special Report with Bret Baier," July 10, 2015. This copy may not be in its final form and may be updated.

BRET BAIER, ANCHOR: OK, it's Friday. You know that sound, Candidate Casino. You have $100 in chips going to go around the horn with the panel. Where do you put the bets in the Republican field first? Dave, we'll start with you.

DAVID CATANESE, U.S. NEWS AND WORLD REPORT: Sure. I have $40 on Scott Walker. I still think he is the best profile in the Republican field. He is going to announce Monday. He is leading in Iowa. But a governor from the Midwest who has won a swing state and who is not named Bush, I give that annual edge. Of course you have got to put Jeb Bush in the top tier because his name is Bush. But frankly you have 40 percent of Republican primary voters who have a problem with that. A lot of people love Marco Rubio. I don't see him in the polls where he would need to be. I still think Rand Paul has got a base there because of his father. So I put 15 on Rand and 15 on Marco, and Walker and Jeb in the top tier.

NINA EASTON, FORBES MAGAZINE: I put in terms of the top of my pile this week I put Scott Walker and Jeb Bush, Scott Walker for slightly different reasons. I love this ad he released, this Hollywood thriller type ad that shows him almost losing his job standing up to the unions. I think some people might think it's over the top but I thought it was really effective.

And I love how he is kind of putting out the word that he would consider Rubio as a VP candidate, which is an attempt to both diminish Rubio and to make his donors feel like he could put a Hispanic on the ticket and make them happy.

CHARLES KRAUTHAMMER, SYNDICATED COLUMNIST: I stay with my theme that there's a 90 percent chance that the nominee will be either Rubio, Walker, or Bush, and I split them evenly each at 30 percent. That's good. Let's get the numbers up there. And then my two outliers, Kasich and Cruz at one in 20 chance each. No money on wine, women, and song -- I'm going straight. I'm getting serious now.

BAIER: OK, let's head to the other part of the casino, and that is the Democratic side. Far fewer choices there, but a little bit more interesting now, perhaps. Dave?

CATANESE: I have 75 on Hillary. Some people may think that's low but I have seen some of these Bernie Sanders' crowds. I saw one last night in Arlington, Virginia. He is pulling big crowds.

BAIER: You feel the burn.

CATANESE: I feel the burn -- $20 for him. It's probably not going to be him. But, you know, look at his polling eight points within Hillary in New Hampshire. Not bad for this point. Five dollar for Joe Biden who still has to make a decision on this and will by August 1st.

BAIER: Which is a really big story.

EASTON: I put 65 on Hillary, 25 on Sanders, who is obviously, you know, a long shot but pulling in huge crowds and 10 on Biden because there is this vibrant draft Biden effort out there. I don't see -- I'm putting nothing on Jim Webb or Martin O'Malley by the way.

BAIER: Facebook, Brenda Presser 90 on Clinton, five on Sanders and five on Biden, and Twitter @NicKVent, 75 on Hillary, 25 on Martin O'Malley. OK, Charles.

KRAUTHAMMER: I can't believe how my colleagues are wishful about a race among Democrats. It's obvious Hillary 95 percent. Act of God is the only chance of it not happening.

KRAUTHAMMER: My winner is South Carolina for a graceful, dignified, end to its debate on the flag. The loser is San Francisco, cool and trendy to be a sanctuary city until it kills a beautiful young life.

EASTON: My loser this week has to be Hillary Clinton not giving the first interview she gives since she has been running for candidate and she got roundly panned. The best thing somebody said about her she was rusty. In other words she was nontransparent, et cetera.

My winner are Greece's creditors. How funny is this that the prime minister of Greece after having all this vote to stand up to the creditors basically comes back with a very similar plan to the creditors, and they are the winners.

BAIER: It's the same deal.

CATANESE: My winner is Donald Trump. He has dominated both mainstream media and conservative media for two straight weeks now. And the losers of the rest of the Republican field because is he washing them out. Even if they get a couple minutes on Fox, barely is anyone paying attention to it because Donald has said something controversial. And this is an important time because they're trying to get in the first debate.

BAIER: It's less than a month away. OK, panel, thank you panel.