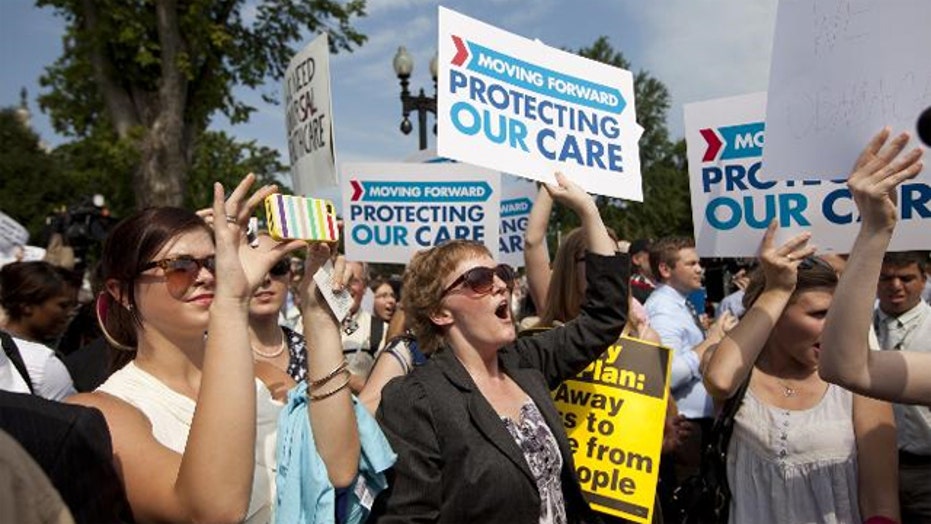 Can you really keep your insurance plan under ObamaCare?

IN FOCUS: UPS and University of Virginia dropping health care benefits for spouses

STEVE FORBES: I think this is just the beginning, delta airlines just announced they will have to pay nearly $100 million more because of that health care law. Other companies are going to be dropping the spousal offering. Other companies cutting back and I think secretly, this is what the President wants. He wants a one-payer system and the more people you get out of employer based systems, the happier he is; especially when companies can pay a $2,000 fine or pay $10-$15,000 per employee. It's going to be a no-brainer and not good for us.

RICK UNGAR: The only problem with Steve's analysis is that it isn't dropping anyone out of the employer-based system. Spouses of employees at UPS will only not be a part of their health care plan if they have a job at a company that offers them a health care plan. This was written into the law specifically to spread it around.

RICH KARLGAARD: You can't even keep up with the details of this on a day by day basis; there are more complications that arise. I would just reduce it to its ultimate simplicity. If this is such a great plan, why doesn't Obama raise his hand and abide by it himself? Why doesn't congress, Nancy Pelosi who said we should pass this to find out what's in it, why doesn't she volunteer to abide by everything in the plan. The hypocrisy here is appalling.

SABRINA SCHAEFFER: UPS has determined that their costs are going to go up but 11¾ percent beginning in 2014.They have to make some changes in order to not affect their bottom line. There are so many things written into ObamaCare that will cause this increase the cost; the fact that children can stay under their parents plan until they are 26, the fact that we have minimal essential coverage now, the Cadillac tax, there's a 40 percent tax and all sorts of other fees and regulations. I don't think UPS is any different than Darden restaurants or cities across the country, all of which are going to cause a little jigsaw puzzle trying to figure out to not lay off workers in order to accommodate this new law.

JOHN TAMNY: I think we are seeing a glimpse into the future with UPS and UVA. Health insurance is a cost; the provisions of ObamaCare will make it costlier per employee. One logical way to reduce that cost is to force spouses off the program to mitigate the effect of the legislation. We are going to see more of this; we will see families and wives voluntarily opt out of health insurance to avoid being a burden on the husband's employment. ObamaCare will perversely cause more people to be uninsured than was the case before.

57 percent of college students relying on federal grants and aid

SABRINA SCHAEFFER: It absolutely is. Look, as government has expanded their aid programs, demand for colleges, preferably private institutions has gone up and colleges in turn are increasing their prices. It's not necessarily equal to the quality of education or skill set they are leaving students with. Since the Clinton administration, the college tuition has increased $160 billion and student loan debt is over $1 trillion, with 70 percent of students graduating in debt. This is a terrible situation.

ELIZABETH MACDONALD: This is just ObamaCare for higher education. In terms of government determining what colleges deliver and what don't, that will become a political football. There's no reason why college sticker cost should be going up 4 times the rate of inflation. You'll see a push for 3 years rather than 4 years, doing more online and also a push for more schools that teach you a trade that you can use right away and earn a real living.

MORGAN BRENNAN: We have to be careful with how we breakdown government aid. On the federal level we have see increases for college students but on the state level, we have seen those numbers scale back a bit. It's also important to not make this about how college tuition is rising because of government aid. I don't think it's a direct correlation because we have seen states cutting back their funding to colleges as well, part of the reason we see tuition go up from 2007-2012, we saw those cuts on the state level.

MIKE OZANIAN: It's basic supply and demand. When the Federal Reserve floods the economy with cheap dollars, stock prices go up, when you flood the college education market with cheap money, tuition goes up. It's no different.

JOHN TAMNY: When compassion drives public policy the result is cruel. You have the federal government saying ‘hey let's have everyone go to college so let's make it affordable' and the end result is that is unaffordable and we know why. When someone is spending the money of others it's going to back up loans for tuition it's only logical that tuition is going to rise. It's not the sole driver of it, but it's a big factor.

MIKE OZANIAN: The improvement in housing is not sustainable because it's being driven by the Federal Reserve's massive 2.9 trillion bond buying program, not by improving income. Household income is down 4.4 percent since June 2009. Sustainable home prices are driven by people making more money. In this case, they are bringing home less money.

MORGAN BRENNAN: As we see the Fed pull back on their bond buying you'll see the frothiness we have seen in the housing recovery slow down a little bit but that being said, the recovery is here. If you look at the market nationally, it bottomed in about 2011 and has been climbing up since. One of the biggest factors here is not the fed bond buying or mortgages and mortgage interest rates; it's the fact that we have record tight inventory levels. Actually, housing prices came off so much that your interest rates would have to hit 6.5 percent with that income growth for it to be not affordable to buy a home.

RICH KARLGAARD: Here in Silicon Valley it's booming, but 50 miles east in Stockton, it's the great depression. We have rising interest rates; the economy is only growing at 2 percent which produces a negative income that you see across the country. The leading edge at new housing starts has produced disappointing numbers compared to the forecast both in June and July.

STEVE FORBES: I think this is a case where if the government had done nothing and let the economy have a natural recovery, housing would be better today even without the Fed's artificial stimulus. Strong housing depends on a strong economy. We don't have a strong economy.

INFORMER: Back to school! Parents ponying up more this year for gadgets such as smartphones and tablets

Pick a stock that will benefit from the back-to-school shopping.