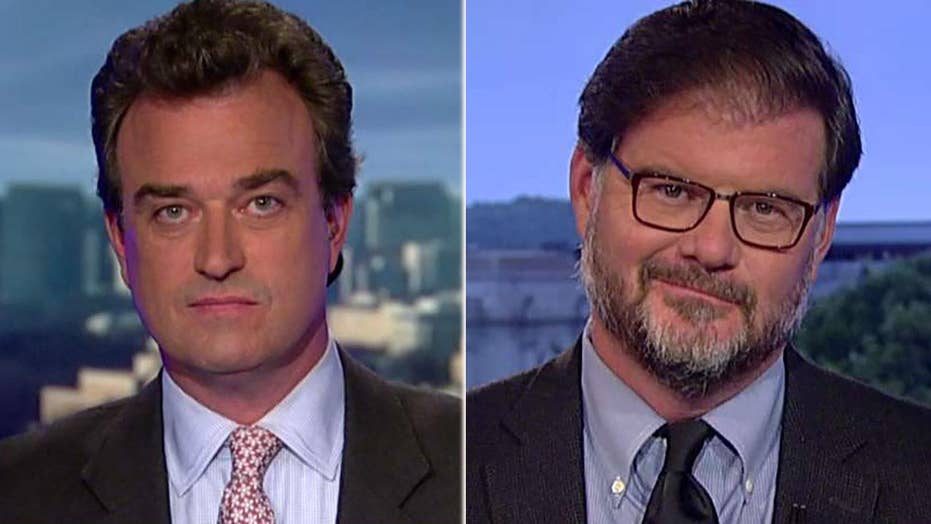 Can Trump salvage his relationship with Republicans?

This is a rush transcript from "Special Report with Bret Baier," September 8, 2017. This copy may not be in its final form and may be updated.

STEVE BANNON, FORMER TRUMP CHIEF STRATEGIST: When you side with a man you side with him, OK, the good and the bad. They are not going to help you unless they are put on notice they are going to be held accountable if they do not support the president of the United States.

SPEAKER OF THE HOUSE PAUL RYAN, R-WIS.: When I took this job at the request of our members, I knew it would come with lots of slings and arrows.

MICK MULVANEY, WHITE HOUSE BUDGET DIRECTOR: That frustration is real. The president is a guy who is driven by results and driven by action.

REP. JEB HENSARLING, R-TEXAS: I haven't heard a lot from the White House on what we are going to do to get off the road to national bankruptcy?

REP. JIM JORDAN, R-OHIO: What the American people want us to do, build a border security wall, cut their taxes, and repeal Obamacare, and not keep adding to the debt.

BRET BAIER, ANCHOR: The House passed what the Senate passed, which was the debt ceiling raise, the continuing resolution for funding the government, and the funding for hurricane Harvey. The president signed it this afternoon. The president earlier in the day tweeted, "Republicans, sorry, but I've been hearing about repeal and replace for seven years. Didn't happen. Even worse, the Senate filibuster rule will never allow Republicans to pass even great legislation. Eight Democrats control will rarely get 60 versus 51 votes. It's a Republican death wish. Republicans must start the tax reform, tax cut legislation ASAP. Don't wait until September, end of September. Need it now more than ever. Hurry!"

With that, let's bring our panel: Charles Hurt, opinion editor for The Washington Times; Tim Farley, host and managing editor of Morning Briefing POTUS on Sirius XM Radio, and Jonah Goldberg, senior editor of National Review. Well, if he wasn't clear yesterday, he was trying to make it clear in these tweets, Charlie, that there's been a shift in the dynamic here.

CHARLES HURT, THE WASHINGTON TIMES: Yes, and quite a shift it is. And the fact that so many people on Capitol Hill, so many Republicans on Capitol Hill were surprised by this suggests to me that they still don't really get the message from last year's election. This was obviously coming down the pipe or, you know, Donald Trump got on the map first and foremost by beating Republicans. And I think that that was a big part of what sort of launched his inevitability towards winning the White House.

And for people to be surprised by that now, he's not a conservative, he's never run as a conservative ideologue. He has gained strength off of the deep frustration among Republican voters towards Republican leadership. And the fact that they were unable to get done not just what he campaigned on but what so many of them campaigned on, it should've been no surprise. Obviously, he's going to cut a deal with anybody he can cut a deal with.

BAIER: Here is Steve Bannon talking to Charlie Rose about the Republican establishment.

BANNON: The Republican establishment is trying to nullify the 2016 election. That is a brutal fact we are going to have to face.

ROSE: Wants to nullify the 2016 election?

BANNON: I think Mitch McConnell and to a degree Paul Ryan. They do not want Donald Trump's populist economic nationalist agenda to be implemented.

BAIER: All right, Tim, so clearly there are points that the Republicans in leadership have dropped the ball on the number of things, including on repeal and replace. But if the president wants to have smaller government, to have a big tax reform bill, to have a border wall, doesn't have to work with those Republicans?

TIM FARLEY, MORNING BRIEFING POTUS: Yes. And this is a point, is it not? Steve Bannon is a bomb thrower. He likes to throw them. He fashions himself a street fighter. He says he is one, the president is one.

FARLEY: Yes, exactly. And he would like to repeal and replace the Republican establishment. But like the Republican establishment he detests, he's got nothing to replace them with because there are not going to be conservatives who work with him because the spending sluice gate is opened from the president. It seems pretty clear that he's ready to spend money that the conservatives don't want to spend. The Democrats will drop him like a hot potato at some point.

With Steve Bannon, I'm not sure what his constituency is. It's really not a call to governance. It's a call to arms. And quite frankly, the larger point here is I don't know who takes a win out of this week because we have a president and the Democrats who were claiming a victory to go a couple of months to do something that they should have been working on a long ago. The Republicans can't take a win. They are almost like the student who shows up every day and says give me an A. They are barely getting basic governance taken care of, and I don't think there's a way they can claim a victory for themselves or for America in any way, shape, or form.

JONAH GOLDBERG, NATIONAL REVIEW: I agree with a lot of what both of these guys have to say, and I agree entirely what Charlie when he says that Donald Trump isn't a conservative, he didn't run as a conservative. And I agree that there is a tension between the Republican Party, whether you call the establishment or not, most Republicans in Congress did better in the 2016 election than Donald Trump did.

When you hear Steve Bannon talking the way he's talks in this, if you are appearing on CNBC or FOX Business instead of "60 Minutes," you would say, well, he's just talking his book. He's talking up a narrative to promote clicks at "Breitbart" and this utterly ridiculous claim that somehow the Republican Party should embrace a philosophy and a political program that they don't actually agree with. The idea that they are nullifying the presidential election is ridiculous. The idea that somehow we don't live in a parliamentary democracy where the president's party has to agree with him in things that they disagree with him with, too many people are trying to make it out as if the only true test of being a conservative is whether or not you agree with Donald Trump. And that's ridiculous.

BAIER: North Korea could launch this missile, the next one, within hours. I think there are a lot of different thoughts about that. I want to skip that because the breaking news about Lois Lerner and the fact the Trump administration says as we are not going to open up that case.

FARLEY: Yes, the same thing. She took the Fifth and there's nobody else who is going to go after here. If they're going to go after her, who is going to turn her in? So why chase smoke and mirrors? It would be a long, involved thing, and the last thing they need now is to be appearing partisan. I think it's just the right move. Probably, I'm not a lawyer, but I think politically it's certainly not going to be a problem.

BAIER: I guess there is just the frustration with people I hear about, about all these investigations, that they end up going nowhere eventually.

HURT: It appears that the establishment is very entrenched and they have to do a better job of explaining why they are pushing charges. But --

BAIER: But this is not the establishment. This is the administration.

HURT: Yes, but I would assume that this is a decision made by lower-level attorneys in DOJ. But it does set up the point that tax reform is a very, very big issue. People hate the IRS. They hate the tax code. And this is a good opportunity. And if this administration fails to win on tax reform, they are going to be in really big trouble.

GOLDBERG: I want to say I love the IRS.

HURT: The winner is the U.S. constitution. We now have a president who understands the limits of the presidency and that only Congress can pass laws. The founders would also be thrilled by the tension between the president and the Congress as opposed to between parties.

The loser of the week is the resist Trump movement. Last week Democrats were calling Donald Trump a racist and dangerous and unfit for the presidency, and not they're in bed with him. FARLEY: The winner of the week is Mother Nature. You can't beat Mother Nature. Mother Nature is just all encompassing. And we've seen a lot of people who have been victims who have been showing compassion, they've been showing competence. And the administration has been doing a pretty good job, but every time you think you're going to get it handled, Mother Nature comes back. So she's winning this week.

The other thing, the loser is Paul Ryan, and that seems like a pretty easy one. But just look at all the things he carried the water this week. Nancy Pelosi didn't lift a finger. She's smiling more than when she was the speaker. She got the goldmine, he got the shaft, if I can quote Jerry Reed for a moment.

GOLDBERG: The winners are Chuck and Nancy. They rolled Donald Trump quite easily. And the loser is Hollywood that had an absolutely craptacular somewhere. And they are blaming it on Rotten Tomatoes, not the fact that they make bad movies.