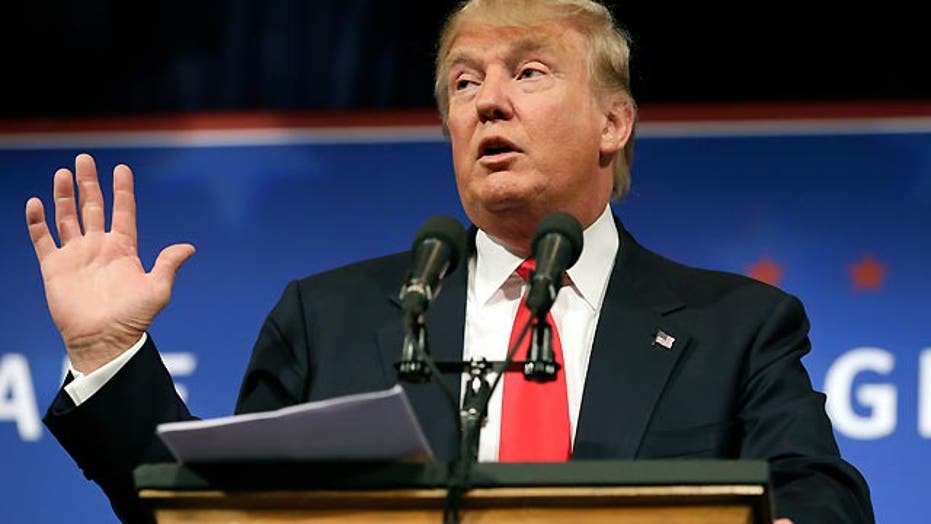 Can Trump overcome the backlash over immigration remarks?

BRET BAIER, ANCHOR: You had lunch with the Romneys recently. Get any advice?

GOV. JEB BUSH, REPUBLICAN PRESIDENTIAL CANDIDATE: I did. I got a lot of good advice from the last candidate who I wish was president right now, the last Republican candidate. And he validated a belief that I have, which is that at some point we have to start campaigning in a way that's beyond the base.
I think you have to be respectful of conservatives and you have to campaign hard, convince them that you're the right guy to unite the party. But there also always ought to be an eye on the ball of the next group of people that actually decide who the president is going to be.

BAIER: Jeb Bush out today in New Hampshire. We'll see more of that in the "Contenders" series piece that will air Tuesday. We're talking about conservatives, how he's going to plot a way through this nomination battle. In the meantime, another person in the field is getting a lot of attention talking about illegal immigration, talking about, frankly, some criticism from this panel.

TUR: Goldberg has compared you to a failed man who mistakes flattery for insight. George Will --

TRUMP: I went to the best school, got the best, great marks, everything else. I went out and made a fortune, a big fortune, a tremendous fortune. And then I get called by a guy that can't buy a pair of pants, I get called names? Give me a break.

OK, first, Charles, any response to any of that?

CHARLES KRAUTHAMMER, SYNDICATED COLUMNIST: He's repeating himself.
I'm like Jeb on this. I'm done. The man's specialty is to suck oxygen. I want to be breathing fresh air. And I do want to make an appeal to the viewers out there to crowd source, to buy Jonah a pair of pants. I think if you look under the table it's disgraceful the way he comes to the show.

BAIER: Laura, listen, he is touching a nerve. You heard Jeb Bush not wanting to talk about him, but Jeb Bush also talking about conservatives in an interesting way when I asked him about his how he's going to plot this strategy.

LAURA INGRAHAM, RADIO TALK SHOW HOST: The fact is Jeb's going to run a campaign that largely does not appeal to the conservative base of the Republican Party on key issues. Trump is going to run a campaign that appeals to a lot of people, not everybody, but a lot of people on certain issues. One trade, Republicans just gave Obama a huge gift on trade. Then they say well he's a bad negotiator with Iran but we're going to trust Obama on all these trade deals. OK.

CHARLES LANE, WASHINGTON POST: I'm not Donald Trump's friend. And after what I'm about to say I'm definitely never going to be his friend. I cannot believe we're having a serious conversation about Donald Trump for president. This is a man who in political terms the day before yesterday was going around demanding Barack Obama's birth certificate, OK? He is being kicked out of every corporate association he has right now because of the things he said about people from Mexico. He is not just not a serious candidate. He's not a serious man. He's full of a lot of entertaining bluster. I love watching him. He's huge on TV and all that. But he is dragging down the Republican brand, and therefore it is smart for people like Jeb to take the position they're taking, namely, the less said about him the better.

INGRAHAM: How is he dragging down the Republican brand? I don't understand that argument. He's saying things that are annoying to a lot of people. I get that.

LANE: Not only annoying, they're not true.

INGRAHAM: But that, again, what we have to I think remember here is that the Republican party has a terrible brand right now. The house has accomplished basically nothing. The Senate has accomplished trade for Obama. What have they accomplished? And they're the majority.

So he's appealing to a lot of people. Do I think he's going to be the nominee? No, I don't. Not right now. Something could happen, maybe could, maybe not. I don't think so. But he is appealing to people. I think for people to just wave him off and say oh, he's a clown. His issues are not being discussed by a lot of other candidates. And he's getting -- he's going up in some of the polls because people think he's a fighter.
And they want a fighter for America.

BAIER: Do you concede that he changed the dynamic and the conversation.

LANE: Yes. He changed it to a conversation about things that aren't real issues, like all Mexicans are rapists.

INGRAHAM: He didn't say all Mexicans are rapists. He never said that.

BAIER: He said Mexico is sending illegal immigrants into the U.S.
You look at the quote. He's out there defending it.

KRAUTHAMMER: I really think that we spent enough time on Donald Trump, which is exactly what the problem is. It's a catch 22. If you want to ignore him -- if you don't ignore him you end up in exactly what he wants, a conversation about him. It's a complete waste of time. The idea that these issues were not raised, immigration is not an issue until Trump came along, is preposterous.

BAIER: All right, so what about the Jeb Bush interview? You listened to him, how he explained, as Laura mentions, his pathway to the nomination in a tough scenario through some of these states.

KRAUTHAMMER: You know, I don't understand how somebody as experienced as him could actually say you have to be respectful of conservatives, as if they are some kind of alien body. He respects them, but it's not him. I thought his idea was to campaign and say, I'd govern as a conservative. In fact, he did for many years in Florida. I am a conservative. I also want to appeal to independents and others, which is the way he would present himself I think if he had it right.

But there's always a ting where he plays into the idea that in fact deep down he's not a conservative and that he's going to pretend to be or appease them or appeal to them, but that's not who he is.

BAIER: We should say in the extended remarks, I pressed him on that battle between conservative and moderate where he lies. And we'll see all that Tuesday. But as he presented it tonight?

INGRAHAM: Conservatives delivered the House and the Senate to a party that was almost destroyed in 2008, that had terrible approval ratings.
They didn't campaign on trade with Obama. They didn't campaign on immigration amnesty or not standing up to Obama. They campaigned on a whole set of issues that I think people are demoralized. They think those issues are just gone now and the Republicans just aren't going to do anything. That's a fact. It's not about Donald Trump. It's about what are the Republicans going to appeal to their most ardent supporters on? What issues?