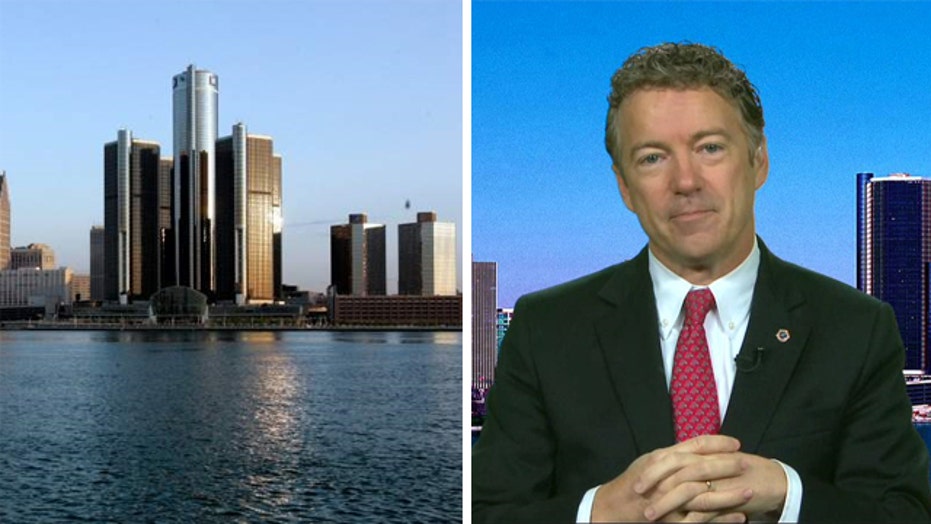 Can the free market save Detroit?

MICHELLE FIELDS: Isn't this the President that's supposed to be on the side of the people and not big business? Yet here he is basically buying out insurance companies on top of providing them with a trillion dollars in subsidies for the next 10 years. Now we learned this little known provision called the "Risk Corridor" which basically says if insurance companies suffer any losses three years after the implementation of ObamaCare, we are the ones who are going to reimburse and compensate insurance companies for their losses. It's ridiculous.

WAYNE ROGERS: It's a joke. It's terrible. You think that $1T, as you said, in the first 10 years, the normal cost of this thing with subsidizing-on top of that, they're now saying "we're going to bail out anybody-if you got your policy cancelled we're going to pay the insurance companies for that." It's a ridiculous thing, and on top of that he has a political agenda. His ideology is in this. He's going to exempt labor unions, and he's going to bail these insurance companies out. He's got a fascist program going with insurance companies, and a communist program going with the labor unions. It's unbelievable.

JEHMU GREENE: I have a problem with that, too. I think your viewers are so smart because they understand you can't have this President be a socialist and then he's a communist, as Wayne just said, but he is bailing out the insurance companies-- and ObamaCare in and of itself is a bailout. This is not a government takeover of healthcare, as so many of your guests say on a weekly basis. You can't have it both ways. This program brings 31 million new customers into their bank accounts.

JONATHAN HOENIG: What part of this isn't controlled by government? Wayne hits the nail on the head. This isn't capitalist, this isn't liberty, this isn't America. This is fascism. And economy that's supposedly privately owned, but in reality completely controlled, manipulated, and as Michelle said, subsidized by government. You've got billions of taxpayer dollars going to those-I thought they were evil, right? They were supposedly so evil and rich-the insurance companies to offset their losses, to share in their profits, subsidies for insurance companies, and again, as Michelle pointed out, of course the chrony-ist elements-the unions get a free pass. This is Obama's animal farm; not all animals are equal.

JONATHAN HOENIG: Kids, and man in general, are inclined to trade, not to beg. We're the thinking animal. We want to trade value for value, not conquer and beg and ask for favors from other people. This young girl, this young person, just like a lot of young people, whether its lemonade stands in the road or roadside sales, they're excited about the idea of making something, and actually having somebody pay them for it. Those are the type of values we should be teaching: independence, self-reliance-not more dependency from Uncle Sam.

MICHELLE FIELDS: It's ridiculous. We should be promoting these kinds of things. It's great that this girl did this. Unfortunately, I will not be surprised if we find out that Uncle Sam comes knocking on her door next year asking for money. This perfectly reflects what's wrong in this country eight now. There are too many rules, too many regulations, and it continues to get worse. In 2012 alone, the regulatory rules exceeded the amount that were in the first term of Bush and Clinton combined. It continues to get worse. That's why businesses aren't opening up. They can't afford to open up. They can't afford the licenses and permits that you have to go through. It's ridiculous.

JEHMU GREENE: First, little miss Madison Root-Megyn Kelly you'd better watch out because she's coming for your job. I want to focus on-I don't think it was a park ranger, I think it was a security guard. He was probably making minimum wage, which means he was hungry because food stamps have been cut. He made a bad decision, and it was a ridiculous decision.

WAYNE ROGERS: I'm still laughing at Jehmu's reach for that one. That was a long way. This is a remarkable thing in the sense that-and Jonathan is absolutely right-this is a case where capitalism is going to will out regardless of what you do. In other words, the natural propensity to trade is so strong that she is producing something here that we all want to do at any time, and she did a great job.

WAYNE ROGERS: KEEP DRIVING AWAY WITH PROFITS FROM FORD (F)