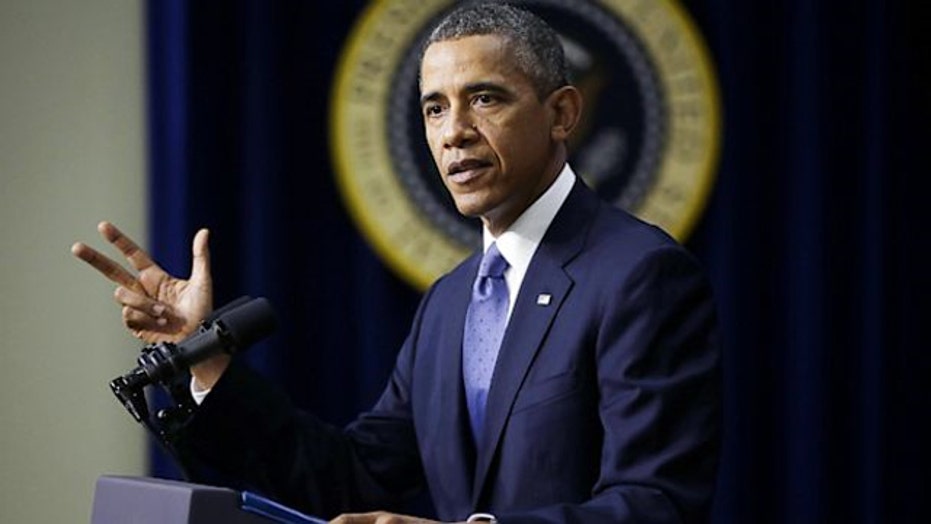 Can Obama administration promises be trusted?

CAN WE TRUST GOVERNMENT?

STEVE FORBES: Sadly, no. Trying to reinstate these policies now is a nightmare. Insurers have to know this is going to be more than just a few months; it will be several years in the future. This is just a fix to get through the next election. It's a big mess that will just get bigger. This thing is collapsing on its own.

RICK UNGAR: Whether you can trust them or not, that isn't as much the issue as is the perception and right now Americans are not trusting this administration. In politics, things change. Something will happen next and if they do the right thing, they handle it well, they'll dig out of it. If they don't he's got a big problem.

ELIZABETH MACDONALD: That report went from also IRS, HHS, Treasury Dept and labor so the administration knew it. Now those people are being treated like a rounding error from the administration, they are essentially saying ‘we are looking at the 90 percent who would get improvements in their health insurance.' That also is a fallacy because their prices are going up too and people are losing doctors by the score. Millions of people coming home from the holidays now seeing their insurance cancelled and losing their doctors. Credibility is a fragile commodity for any president; he shot it out the door. People aren't listening to him and not trusting him.

RICH KARLGAARD: I don't think there is any fix at all but I guarantee between now and the 2014 elections, the administration is going to wage a fierce war against insurance firms and blame it on them. Manfully, President Obama did not do that on his press conference on Thursday. I think you'll see this in full force behind the scenes. It is fundamentally broken, cannot be fixed. We have to start over.

JOHN TAMNY: It's gone. There is no way an electorate is going to allow a president or a party who wrote such an incompetent law to get up to the plate and do this once again. There is a reason to be optimistic here. If you support limited government, you must rejoice that president Obama was reelected because his administration is the best advertisements of the horrors of big government we've had in a long time and it will have legs going into the future, I love this.

SABRINA SCHAEFFER: I don't think it's possible and one of the best things that can happen over this entire debacle is to have a seismic shift in the way people see government, insurance and the role the government should play in the healthcare market because there is a misconception that we actually had a market in place in healthcare before ObamaCare took effect. The fact that the government has been involved in the healthcare market for 40 years, this is what we got, and now we try and add on more government which meant that all of the problems doubled down and got worse.

BLACK FRIDAY IS NOW ON THANKSGIVING, ARE UNIONS RIGHT TO PROTEST?

JOHN TAMNY: It's simple. I love my days off but if someone offers triple my salary to work on Christmas and Thanksgiving, I may take them up on it. In this case, if the retailers have customers that they want to please. They have employers and employees who are willing to help them please their customers for a higher wage. Everyone wins here and I think the unions are just revealing how divorced from reality they are and trying to make noise about it.

RICH KARLGAARD: I'm generally not a fan of unions and I think that public unions should be illegal, but this is what unions are for. Why shouldn't they bargain on half of their workers and if they can get 4 times their prevailing salary on Thanksgiving and Christmas, why not test it?

STEVE FORBES: By law, anytime you go overtime its time and a half if you are an hourly worker and on holidays, it's at least twice as much. I know a lot of single Starbucks and people there love these holidays because it means more money for them. It's voluntary, if they want to take the opportunity go ahead and do it, and remember, retailers are in the business to please customers and this economy needs more customers right now.

BILL BALDWIN: I think the union should scream and shout and stop and say we don't want to work on Thanksgiving because the unions are supposed to do that. Those unions are competing with some retailers never sleep like Amazon.

ELIZABETH MACDONALD: Yes, it will help the bottom line. Wal-mart officials say they pay extra to workers coming in. The workers voluntarily apply. They are free to leave. They are paid more than fast food workers with benefits they get $15 to $18 an hour.

STEVE FORBES: Yes. If you don't rely on free people making free choices this is what you get. If you look at Germany & Denmark for instance, their electricity rates are three times our own. This is a political pay off. If you see green, you should see red, red in anger and red ink.

RICK UNGAR: I am not a fan of ethanol. It's not news how it affects the food prices but there is no up-side to lump it in with renewable fuel. I understand you have problem with government subsidies for these things, different conversation. Who can be against renewable fuels? It's just a good thing.

MIKE OZANIAN: This stuff is terrible for engines. It destroyed my snow blower and the lawn mower engine. How am I supposed to do my lawn work?

SABRINA SCHAEFFER: Big industrial farms. It takes 450 pounds of corn to make ethanol to fill up a single SUV tank of gas. That is hardly efficient. It is highly corrosive. It has to be transported wheel or rail not the pipeline which is not so environmentally friendly and is cost inefficient.

BILL BALDWIN: We agree that corn ethanol is a scam on all fronts. But most green energy projects have one big flaw. The billion-dollar solar farm is economic disaster. Biodiesel if it caught on would destroy what is left of the rain forest. Windmills are an eyesore.

STOCKS TO PAY FOR HOLIDAY SHOPPING