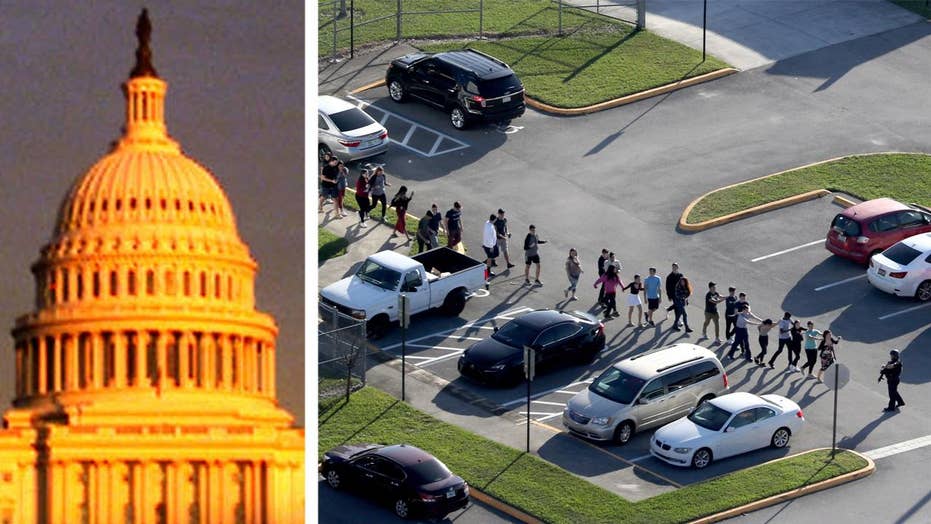 Can Congress legislate an end to school shootings?

From gun control to mental health issues, Washington has so far been unable to put an end to mass shootings at American schools; reaction and analysis from the 'Special Report' All-Star panel.

This is a rush transcript from "Special Report with Bret Baier," February 14, 2018. This copy may not be in its final form and may be updated.

UNIDENTIFIED MALE STUDENT: They pulled the fire alarm and they went on the intercom and they told everybody to evacuate. When we were down by the portables, we finally got word from the students, and we walked across from the canal. And we ended up right over there.

UNIDENTIFIED MALE STUDENT: I heard a lot of gunshots. And then right after when the police let us out, there was dead bodies everywhere. There was two there and when I kept walking down there was more. It was scary.

UNIDENTIFIED MALE STUDENT: We were just in class. We did notes and were talking about a project when the fire alarm goes for the second time in the same day, which is weird. So we all go to the field like we are supposed to, and then I hear gunshots. You could tell definitely gunshots.

BRET BAIER, ANCHOR: Just some of the students who had to deal with a horrible scene, 17 dead.

Let's bring in our panel: Steve Hilton is a former advisor to British Prime Minister David Cameron, host of "The Next Revolution" here on Fox News Channel; Mara Liasson, national political correspondent for National Public Radio, and Matthew Continetti, editor in chief of the Washington Free Beacon. Mara, we have seen so many of these. There is something of a numbness when you hear that it happens, but then when you are hit by the number, it is just shocking.

MARA LIASSON, NATIONAL PUBLIC RADIO: When you're hit by the number, when you listen to those kids talk about what they saw, I have a middle schooler and a high schooler. It's horrendous. There apparently been 12 school shootings in 2018 so far. We have had 45 days of 2018. Not necessarily with this kind of fatality lever, but yes, this happens too much.

BAIER: Getting to stopping this, Steve, is really a conundrum. It doesn't happen in Great Britain at the frequency it has here. It happens, but it doesn't happen in these numbers. You heard Senator Nelson, Senator Rubio, wait for the facts, see what the deal is. But there is a hunger to try to figure out how we as a country are going to tackle this.

STEVE HILTON, HOST, FOX NEWS There is. And exactly as Mara was saying, it is just really hard to take. No child should have to see things like that and have to recount them in the way we just heard. And of course there is a natural human reaction which is to say there must be something we can do. There must be some wand, policy of some kind that we can wave and make this not happen.

I actually don't think, the British perspective for me is, having been here six years in America and lived here and understood things I didn't understand when I lived in the U.K., yes, it's true that in countries like the U.K. they look at this and say what is the matter with them? Why does this keep happening? Why can't they sort it out? Now that I'm here, I just understand it's not as simple as that. There's a heritage and a culture and a history here. It means that some of the solutions that may seem obvious in other countries are just not obvious here.

I think it's also important to point out when we see something like this, it focuses all of our attention, these mass shootings, but most of the people that die from gun violence in America don't die in these situations. They die in ones that never get attention. And I think the idea that there is a simple solution is just not true.

BAIER: Yes, for example, the numbers out of Chicago day today are staggering. We cover them here, but in this situation, these mass school shootings, it does not appear that this guy has a terrorist tie. We don't know. But he's been expelled for disciplinary action, seemed like a troubled student who was talking about guns and bombs before.

MATTHEW CONTINETTI, WASHINGTON FREE BEACON: It struck me he was born in 1998, just a few months before Columbine. Really kind of inaugurated this historical epoch of the school shootings as being a major media event. And now we are coming up almost on the 20th anniversary of columbine in 1999. It's been a generation.

And so you see all the preparation that goes into not only the authorities but I think almost the students. The way they were describing their experience, some were clearly emotionally rattled. Others, though, were describing it because they are kind of used to the procedures. It's become kind of a way of life, which I don't think anyone counted on when Columbine happened.

Another x factor is social media. When Columbine happened, we had cable news, we had 24-hour coverage. Now, though, we have real-time accounts from students themselves. On the one hand, that gives us a perspective about what happening. On the other, however, it means sometimes misinformation and rumor can get involved as well. So we are living in this era, but there have been new changes I think that make it all the more visceral to us.

BAIER: Listen, our job is to cover it. We don't want to make this guy a star, but this is a major event in U.S. news at this moment and frankly this year. And, Mara, what do you think, as we do this every time, what do you think comes out of this?

However, I don't think there's a simple solution, but I think there are some things you could do to make these less frequent, to make gun deaths in general less frequent. Why do people on a terrorist watch list still allowed to buy guns. For instance, isn't there a better system for flagging mental health problems? I don't know what it would be, but it seems there are some things, some simple things, maybe not wave a magic wand to get rid of all of them, but this shouldn't happen this often period. I don't care if we live in a country that has a strong, proud heritage of owning firearms. This shouldn't happen this often.

BAIER: That we can say definitively.

LIASSON: And there must be ways we can make it less happen less frequently.

BAIER: But why? Why have we not figured it out? Just back to your point. There are 535 lawmakers behind me in that building. We've had a lot of time over the years. Why do you think -- it doesn't have to be a sole gun policy issue, doesn't it? Couldn't be a mental health issue?

HILTON: When we have these discussions after these horrific events, that phrase comes up a lot, mental health. I think we need to go deeper than that because there's a sense of social breakdown not just in America. I don't want to make it American, but you see it in countries, we saw in the U.K. when I worked in government there, and it was one of the things we tried to address, and it comes back to things like the disintegration of the family, children growing up not in stable, loving homes as we would want to see. There are all the other issues that we deal with piecemeal. But I go back to that notion of stability in the family home, and that is something that government can help address. And I don't see any sign of the kind of focus we need on helping make sure that every child in this country grows up in a stable, loving home. That certainly would help with this.

LIASSON: And one of the things we have seen after these events if you really plot legislation that's been passed on the state level and elsewhere, what happens is gun laws get loosened. It gets easier to buy guns, easier to carry them openly.

BAIER: The argument is if it was a security officer with the gun, could've stopped. It's an argument.

LIASSON: But those are the kinds of legislation that's been passed. Why? One of the reasons and you can't ignore it is there is an externally powerful lobby in this country that doesn't want any of these laws passed.

CONTINETTI: A lobby that is very effective at electing representatives.

LIASSON: One of the most effective lobbies in America history.

CONTINETTI: Mainly because it enjoys public support. And so one of the paradoxes of this Columbine era is that even as we see these highly noted, sensational, mass events that are horrifying, the politics of gun control have actually shifted right over the last 20 years.

BAIER: If anything they have gone further.

CONTINETTI: And so how one addresses this situation is a mystery. It's not just gun-control. Its privacy concerns. The sheriff mentioned see something, say something. Look at social media. I am sure that the wizards of Silicon Valley eventually will develop a program that will be able to peal through social media and determine who is most likely to commit crimes such as this.

BAIER: Then we run into privacy concerns from people who say this is big brother who is looking into my life.

CONTINETTI: The rights-based culture of the United States makes it hard for us to address these problems politically.

LIASSON: There was a time when certain kinds of semiautomatic weapons were banned in this country. And that ban expired, and it's been impossible to reinstate it. None of these shootings would have the number of fatalities -- some people would be killed. Not as many.

BAIER: Hold on. Let's stay clear to what we know. On this shooting, he had an AR-15. We don't know where he got the gun. And people say if he didn't have the gun, he would have a bomb and he would plant the bomb.

LIASSON: We haven't had a lot of school bombings.

BAIER: You know what I am saying.

LIASSON: I'm not talking about this particular instance, but there was a time when we banned assault weapons.

BAIER: Last word on this, Steve.

HILTON: I think there is something that can be done but it has to be deep and long term and it has to address the social causes, not just the symptoms. And I think that if this town goes all in for trying to find a gun related solution to this, it's not going to happen. But something useful that could come out of it is real action around the social causes of this, particularly in terms of the family.