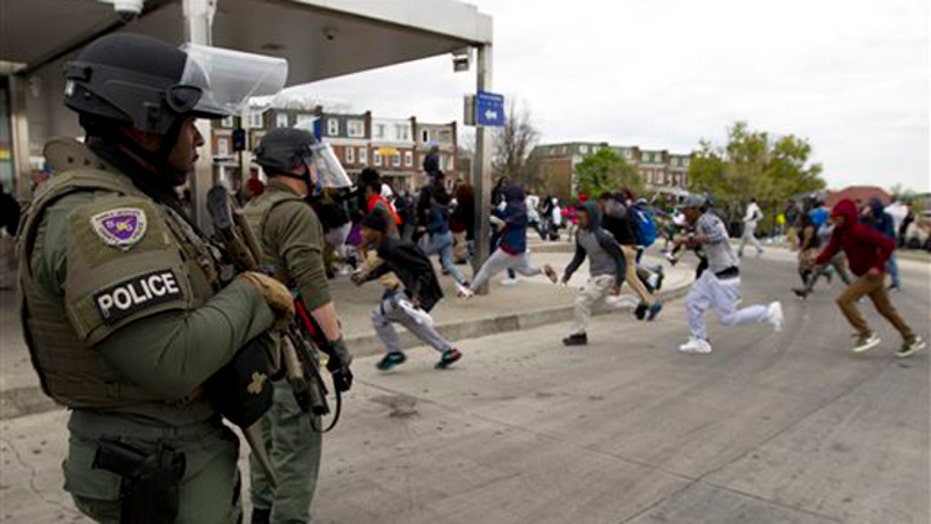 Calls for more spending in wake of Baltimore violence

Is more spending the answer?

John Layfield: No, it's not. In fact we spent almost $12 trillion on the war on poverty and guess what's happened, changed? Nothing. The poverty rate has stayed basically the same. You see dropout of minorities 50% in inner cities in North America. This is just simply not working. We have evidence of decades to show this isn't working. I set up a program to work with at risk kids in Bermuda. This is my passion and what I spend most of my time on working with inner city, at-risk kids. The government has proven they're going to throw money at the situation so politicians can leave and forget about it just like the ninth ward in New Orleans after Katrina was an absolute disaster. That's what politicians have done and that has been an abysmal failure.

David Mercer: I would say there's a case for not cutting additional money and let the bottom fall out from communities we're seeing like Baltimore that, given the recession we entered into, in 2008 with people losing jobs, minimum wage stuck or wages stagnant, expenses for school and other things going up, you do not want to continue to cut and see how much people can take to survive on their own, and not, and lose hope in the fabric of the American society that does lay out a path to the American dream for upward mobility for opportunities for education. So I don't think we need to be cutting at a time when we're, one, coming out of the recession, and people are still trying to get on their feet and we have to close the gap on inequality that exists.

Gary B. Smith: Rarely, Brenda. As you well know, I’m such a big fan of the government because they spend the money so wisely, you know, john mentioned one number, that's just coming from the federal government. If you throw in state and local government war on poverty, the number is closer to $19 trillion that we spent over, what, the last 58 years or so, 59 years, I guess and counting since this started in 1966. I would argue with David with one point. He says don't cut. I'd say yes, that does sound like the humane thing to do, except for one thing. The poverty rate was declining actually before we started the war on poverty. In fact, since we started the war on poverty, since 1966, the poverty rate has actually gone up. There are a few ways to cut poverty, proven ways. Keep a job, any job full time, stay in high school until you graduate, and don't get pregnant outside marriage. You line up all those statistics, the poverty rate diminishes dramatically. Throwing money as great and as mom and apple pie as it sounds just hasn't proven to be the solution.

Suzy Welch: I think we might be talking about the wrong kind of spending. We're talking about the money that's being spent on fighting the war on poverty but the government is spent on a lot of money building the joy began tick regulation machinery in Washington. You can't say in one week when there are riots and also a GDP report of 0.2% that there are jobs for people. I would say let's talk about spending less money on regulation and more money on job creation and the education, put that cost on the businesses to create training for education so people can have jobs. Riots happen when there's hopelessness and despair.

Jonas Max Ferris: Look, there's a lot of people, I don't think are employable in the future of this economy the way it's going with the skill set that's needed which touches on some of Gary’s points. I'm not saying remove the poverty, because every city might look like the pictures if we had no war on poverty but we don't know what that future would look like if there was no Lyndon Johnson. Lot of the money goes to punish bad behaviors in the areas. There is not a whole lot as reward mechanism. Money now to sponsor terrorism. There are handouts for food and housing, most for the judicial system, paying for prisons. The prison costs more than the crime they're going to make was going to net them. I think the government needs to shift the money around to create incentives that don't exist that could mean jobs that aren't really there like FDR type jobs to do work. Rewards to stay in school to Gary’s point to not get pregnant, get good grades, stay out of jail. That would cost less to pay someone nut jail and the incentives aren't there for the people to not fall into these traps.

Gary B. Smith : It's craziness, Brenda. We just talked about in the last segment that one of the roots to stop poverty is to have people have jobs. The businesses of Baltimore provide those jobs. The police are brought in to protect those businesses, as well as the firemen, by the way, putting out the fire. Whole foods steps in and says thank you. Thank you for supporting the community, thank you for bringing law and order. Thank you for protecting the businesses. I should they should be applauded, this is the businesses that helped the firemen and police outdoor on 9/11. No one said then that the police were oppressors. Everyone was thankful that we had police dragging people out of burning buildings. I just think the values here are screwed up.

David Mercer: If I was at whole foods and internally deliberating the decision to feed the national guardsman my question would be why we feed only the national guardsmen, why not the peaceful protesters that are out there and build a sense of community, a sense of oneness and unity, rather than you're feeding one but not the other. I think they open themselves up to looking as being exclusive as opposed to being inclusive, and i think you are seeing in their actions pulling photos off their website, and retracting statements that they are having second thoughts about not including maybe the protesters in providing them with sandwiches as they did with the National Guard as well.

John Layfield: Look, this isn't an either/or situation. This isn't the fact I’ve seen on social media that they had tweets going out about why are you not feeding kids? Why don't you just feed the whole world? The National Guard they're feeding them. I've been out to Iraq several times, seen a lot of our national guard, these guys are heroes. I applaud whole foods for what they're doing and also applaud whole foods as a community-minded operation.

Suzy Welch: Let's get some perspective. About 13 percent of the country is on social media, and this is actually an organized movement on social media, they create a party and then they attend the party and it's just a warm up for 2016 when these sort of professional agitators get online and try to what they call destabilize the enemy and that means they try to destabilize any business that seems to be on the other side of the issues than they are and woe to the company that gets in a tizzy about it. You have to take a deep breath especially if you're Whole Foods which has done so many god things for the community. We know who we are and doing the right thing and not going to let a bunch of people out there professionally devoting take our eye off the ball and distract us. Of course they should be thanked; this is politically motivated and more and more is going to happen. If I was whole foods I’d forget about it.
Jonas Max Ferris: Whole Foods is a great company and done a lot to bring healthier food to America. They're not creating jobs in inner city America, near is Starbucks. The companies are not going there and creating jobs, a. It does look like a police protecting the assets, this anger should be directed towards the government because they're the ones subsidizing corn syrup and lousy food in inner cities.

Suzy Welch : I guess, Brenda, I missed that part of the constitution that had the fourth branch of government for czars. This is ludicrous. It happens in business all the time. Czar is like adding a layer of bureaucracy and it happens when the people in power can't come to an agreement and can't make a decision so they just add a person like a task force or committee and nothing ever gets done. It's just going to slow things down and really what we need is a policy and a government that sticks to that policy, especially in something like this, it is dangerous.

John Layfield: I do and i agree with Suzy about the word czar. It has a horrible connotation. This president appointed a lot of czars to get around congress and they haven't really been that effective. You talk to the families of the hostages that have been lost and they all talk about a bad communication with the government, and i think we're not doing a very good job with the hostages that have been -- with he need to do something. I wouldn't call this person a czar but i would put one central person in charge of this.

David Mercer: Well, I don't think so, and to avoid another layer of bureaucracy that was just alluded to, I think you assign it, this portfolio if you will to the national security adviser, national security council or at the pentagon or its state, because they involve or the ultimate goals of those in hostage taking is a foreign policy or national security agenda, so keep it in current existing operations, but designate somebody who is on point by it so there's accountability for it.

Gary B. Smith : Well, next if someone gets food poisonings in the mess hall we're going to have a mess hall czar, if someone takes friendly fire we'll have a rifle czar. This is the typical solution by government, more government. We've tried it already. We thought we had that with homeland security. Homeland security, that agency has purchase to be a mess. The people at homeland security that work there think it's the worst department in the government. So this one central focal point in trying to tie in all these little thiefdoms as there is in government is not going to work. The only way this is going to work is if we paired down government, not make it bigger and more expensive.
Jonas Max Ferris: The problem is these departments are owl bureaucratic. They don't have managers in them, they have the crazy government pay scales. In theory having a czar -- we start with George Bush who brought the czar back from the FBI levels. It can work. Some cases with the pay scales and everything, brought people in, but just bringing in people as appointees for political reasons are not going to help the problem. That is the bureaucracy on top of bureaucracy Maybe an unlimited pay scale, a bonus structure to oversee the bureaucracy