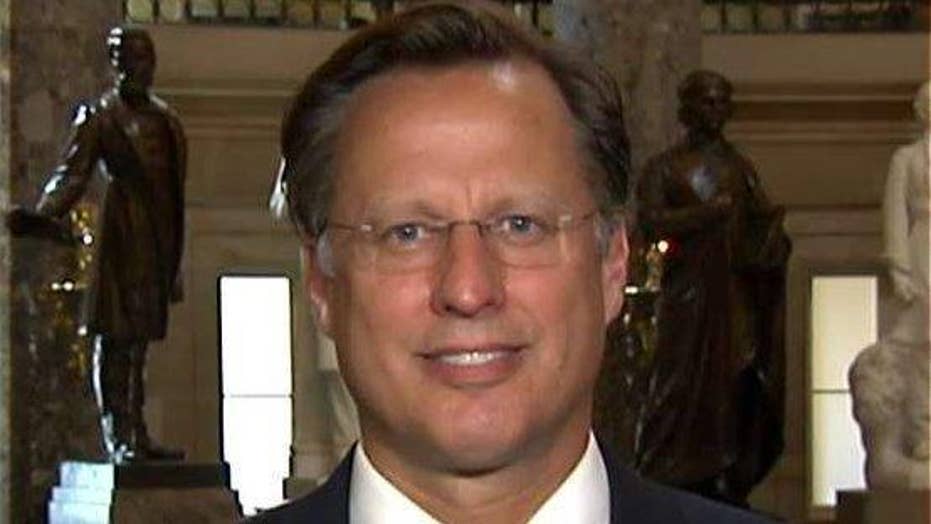 Brat: Amendment allows states to have options to choose from

This is a rush transcript from "Your World," April 27, 2017. This copy may not be in its final form and may be updated.

NEIL CAVUTO, HOST: All right, it's a little early, but we're getting indications that the Freedom Caucus in the House, 30-plus conservative Republican congress men and women who moderates had targeted for torpedoing that last attempt to repeal and replace ObamaCare, but this go-around sending every signal that they by and large agree with a number of provisional changes that have been made to put more power in the hands of the states, and can somehow rescue this second Republican attempt at this.

And that would set the stage, obviously, for the tax cuts that Republicans want to see as well.

Congressman, always good to have you.

Is that a fair assessment, Congressman, that guys are much more unified on this attempt than you were the last one?

The last amendment that was added does what you said. Our key objective from the beginning was to reduce prices. ObamaCare focused almost exclusively -- exclusively on coverage. And prices are going up by 30 percent. And that's the death spiral.

So, this thing, the amendment I'm talking about allows states to opt out of some of the regs. Preexisting conditions are still absolutely covered in three places. Number one, the Obama reg isn't out of our legislation. Secondly, we have a $120 billion pot for preexisting at the state level cover preexisting.

CAVUTO: But will premiums be higher for those with preexisting?

BRAT: Every one -- every state that opts out has to prove that they have a better alternative for those folks. And so that is the -- that's the -- and it's a choice, right?

BRAT: So, that's what is good in economics. You can choose what is best for you.

So, if the states say, hey, it's not good for me, they don't have to do it. And so that's why it's a win-win on federalism grounds, 10th Amendment, states' rights, just standard conservative Republican principles.

And we wanted to see a little bit more of that in the bill. And so it's a good addition. Obviously, we want to keep moving toward to get the prices to move further down. That's the biggest restraint from people going out and having good coverage, is the price is just way too high now.

CAVUTO: How many of your members then like this? If you had to gauge the support of this, what would you say?

BRAT: So, there's enough votes now I think to pass the bill in the House.

CAVUTO: Now the worry becomes -- and this is outside your area, the caucus areas -- of whether a number of the so-called Tuesday group Republicans, moderate Republicans who were concerned about what you might be doing to show your support for this, puts more power in the hands of the states, maybe compromises preexisting conditions.

What do you do to alleviate their concerns? And do you know of who, once hearing your agreement, said, I can't agree to this?

And if you look at their comments, there's only 19 -- there's a new article that just came out today in "The Hill." You can see all 19 names.

CAVUTO: I saw that.

BRAT: And most of the comments don't really have to do with the amendment, because the amendment allows choice.

And so it cannot make you worse off. So, I think they have some other objections. And we respect them.

CAVUTO: This is what I wanted to be clear on, because their concern was the preexisting thing.

CAVUTO: I think you kind of answered that, that they don't have to fear that, hopefully.

CAVUTO: The other was, people who have coverage now who might lose coverage, or the fears that they could lose coverage in this transition to what you have got. What do you say?

Yes, well, and that -- but that's the standard debate we're having about ObamaCare in the first place, right? So, if you're going to maintain all of the ObamaCare regulations, people don't have a choice right now. And so it's kind of a false choice.

Under ObamaCare, you have this fancy gold-plated product. Right? It's a very rich premium and coverage, but you can't utilize it because the deductible is $10,000.

And if you go back 20 years, I think people realize, hey, I had way better coverage at a way cheaper price. And I could afford the family additions and cover basically what I wanted to because the prices were low.

And so we want to get back to that. And we're not making enough progress on that piece. Right? We want people shopping with their own money. That's the ideal.

CAVUTO: Congressman Brat, thank you very much. We will see what that means.

BRAT: You bet. Thanks, Neil.