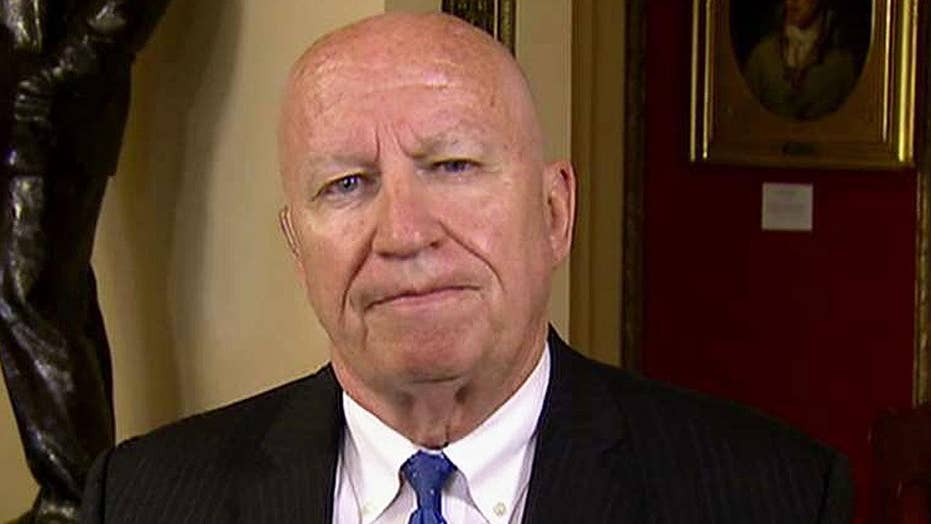 NEIL CAVUTO, HOST: So, it comes down to this, that the substantial tax cuts generationally huge are going to pay for themselves with just inherent growth in the economy.

Now, that has not happened before. We have seen tax cuts, by and large, paid substantially by growth in the economy, but not entirely. So, this would be a first time if that were to happen.

I brought that up with a man who was working aggressively on this before, well, Donald Trump even entertained running for office. His name is Kevin Brady. He's chairman of the crucial House and Ways Committee. It's through that committee that all this process begins and ultimately ends.

Here's what he had to say on Fox Business.

REP. KEVIN BRADY, R-TEXAS: America has waited a long time for a president, Senate, and the House all willing to lead on tax reform.

Clearly, the president is going bold. You're looking at the rates and the numbers as we are. That is important. But I think maybe the most important takeaway from today is, you now have the first serious step toward the House, the White House and the Senate getting together on the same plan.

It won't happen overnight. But this today signals we're rolling up our sleeves. We're going to do the hard work, all to deliver this year on tax reform.

CAVUTO: All right. You say it won't happen overnight. You did say as well at the end of that this year. So what is your best guess as to when this is resolved?

BRADY: So, we have got some work to do.

And so over the next coming weeks, you know, and/or months, working with those in the House and the White House and Senate on this important -- we have got work to do, and I think both on getting the rates as low as we can, making sure we have eliminated any tax incentive to move companies overseas.

And, yes, on border adjustment, the principle of taxing equally in the United States, a big change from where we're at, more work needs to be done. And so we're going to bring, I think, some very positive solutions to the table with the White House and the Senate.

CAVUTO: All right, so when you say on border adjustment, you haven't given up on that?

BRADY: Well, no. And I don't the White House has either.

CAVUTO: Because I got the impression the White House has and did.

BRADY: In fact, I think their point is very accurate, which is the way the original proposal was laid out, you know, it needs a lot more work.

There needs to be improvement, solutions. They're willing to work with us on how to get this to the right place. And, clearly, we have been listening to stakeholders as well on how we design it and transition it. So, we're going to bring those solutions to the table.

CAVUTO: Congressman, is it integral that you get that done first, the health care thing done first, before you sort out the tax plan?

BRADY: Yes, it would be hugely helpful for a couple reasons, one, getting rid of a trillion dollars...

CAVUTO: You have to get that done? Hook or crook, that has got to get done before the tax cut?

BRADY: Well, it would be enormously helpful for that to occur...

BRADY: ... from a tax standpoint, but as importantly, to show that we're willing to lead and govern with this president. I think that is equally critical.

CAVUTO: All right, one of the measures here calls for a 10 percent tax on money that is abroad to come back, be repatriated here, with an understanding, I think, Chairman, if I got it right, it would be used for infrastructure and the like.

But how would you be able to guarantee that? President Bush had tried something similar to bring money back, and a lot of those companies just bought more of their own stock. They didn't hire workers, as was the goal at the time. So how or should that be stipulated?

BRADY: Yes, so, these are details that we have to work out with the White House and the Senate.

The common ground here is, we want those trillion dollars of stranded profits to flow back to the United States sooner rather than later. We want to make sure we don't strand them out there in the future. Very important for competitiveness.

The rates and how it's used I think will be part of the roll-up-your- sleeves discussions we're going to have over the coming weeks.

CAVUTO: These rates, 10, 25, 35 percent, are you OK with those? I think your top rate is 33 percent. Is it likely going to be the higher rate? And when it comes to the corporate tax rate of 15 percent, I think you were at 20 percent. What do you make of these differences?

BRADY: Yes, so the rates are awfully close, Neil, on the individual side, very close on the business side.

We obviously want the rates down as low as we can just for the big businesses, for the small businesses, the owner/operators as well. And so we're going to have those discussions again going forward. I continue to push in the House for us to get below 20 percent, if it's possible, and get those small business rates down as close to equal as we can.

Again, we have got some work to do in both of those areas.

CAVUTO: All right, Kevin Brady, the man who runs the House Ways and Means Committee, again, the point person and the earliest on this whole tax cut talk once, that he is saying, again, it will all be done by the end of the year.