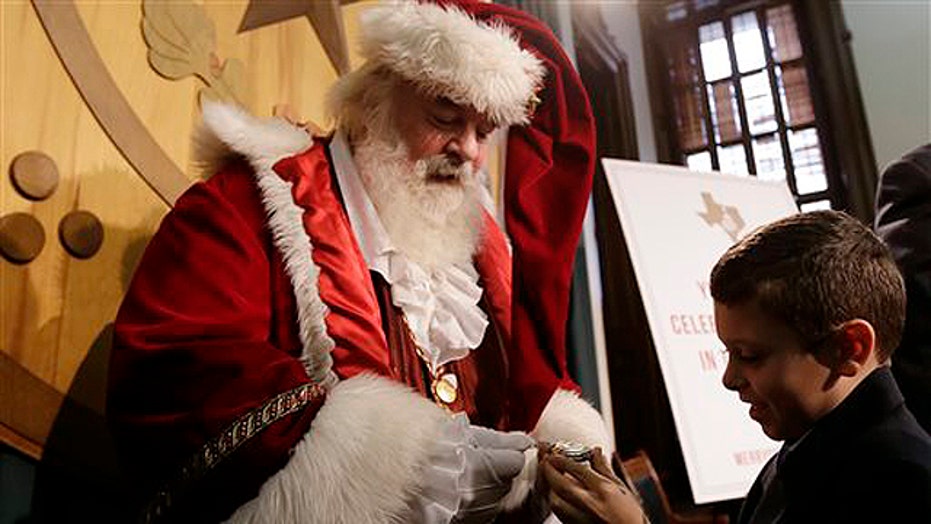 Both sides of the Santa Claus debate

This is a rush transcript from "The Kelly File," December 13, 2013. This copy may not be in its final form and may be updated.

MEGYN KELLY, HOST: Back now to Santa. Ms. Harris who wrote the original article and then went on a rival cable network to describe our segment as angry lamented online that she hasn't been asked on our show. We extended that invitation towards tonight but Slate denied our request. Apparently, that website would rather sling the arrows from the privacy of its offices than allow a fair and balance debate.

Happily however, Zerlina Maxwell is here. And she's a political analyst and writer who is also unhappy with that segment and Bishop Harry Jackson of Hope Christian Church is also here. He's a radio talk show host. But we're going to start with Zerlina.

Zerlina, thank you for being here. Where did I go wrong?

ZIRLINA MAXWELL, POLITICAL ANALYST AND WRITER: Thank you for having me.

Well, I think that you know, you demanded that Santa be white when Santa is a magical man that flies around the world in a flying sled, he's not a real thing. And so I think kids should be able to use their imagination when we're talking about fictional characters and make him whatever they want him to be. If he's white, black, it doesn't matter.

KELLY: How did I demand and insist that he must be white?

MAXWELL: Well, you said, he just is white. That is the case. And it's not.

KELLY: OK, but let me stop you there. Because I was trying to explain this in the talking points. And we have already given the spoiler alert at the top of the show. We know there is no Santa.

KELLY: So, the only Santa I could possibly have been referring to is the commercially driven image of Santa. And I was simply arguing that the image is of a white Santa. And that is the very same thing that Aisha Harris acknowledged in her piece and was arguing we need to change. She and I were on the same page about the fact that the image that is portrayed in the country of Santa is white. We were the same on that. But when she said it and described him as melanin deficient no one cried racism. When I said what she said, I was accused of racism.

MAXWELL: Well, I just think that, you know, sometimes we have to take a step back and wonder why most of these historical figures are portrayed as white. I think that it's very, very important for people of color. You know, I growing up, I had a black Santa in my house. I have a black Jesus. I'm the daughter of two pastors. And so, I had a black Jesus in my house growing up. I think it is really important that, you know, symbols of tradition and culture in our society reflect all of us and all of our identities. And that's why it was problematic because, you know, whiteness is not a default color. It's not the default identity. We're a diverse body of people.

KELLY: I think people agree on that. I think everybody agrees on that. The only thing I was trying to say -- first of all, I was trying to make a joke to the kids at home. People are saying, oh, what kids are watching Fox News at 9:00 at night? But we are on at 6:00 p.m. on the West Coast.

And people, I know from my viewers that they watched with their families and so on. So, I didn't want to get in trouble like GMA did a couple of years ago when they said some bad things about Elf on the Shelf.

So, I was sort of trying to do a tongue and a check warning to the kids like, why are they talking about what race Santa is? That we know, people know that Santa is real, what he must have a race right now as he's walking around the North Pole. And that's where, you know, people sort of -- I don't know what happened. But I think they misinterpreted me some genuinely. And then I think some people who like to hate on Fox News and on me started to ascribe some really unfortunate motives.

MAXWELL: Well certainly, people that are, you know, put unfortunate motives on you and me. You know, I appear on Fox News rather frequently as a Democrat. And so, you know, the hate mail that I received is pretty ugly as well. I just think that, you know, we need to expand our imaginations when we're talking about fictional characters. There was a controversy with "The Hunger Games" about one of the characters being portrayed as a black actress even though she is actually in the book described as a black person. And people weren't able to feel the same level of sympathy for the character because she was black. The root of that is actually very problematic. And we should really tap into why that is.

KELLY: Let me ask you this. Because, you know, we didn't really get to debate, you know, Ms. Harris's position which was we need to think about changing the image of Santa.

KELLY: But that, too, has brought a lot of, you know, feelings out by a lot of our viewers saying, look, you know, historically, all those pieces I referenced, all those pieces Ms. Harris referenced showed a black Santa. And some people are taking issue with her suggestion that the mere color of his skin in these portrayals as white is somehow alienating to black children or, as she put it, causes shame in them.

MAXWELL: It is alienating to black children.

KELLY: Why is white skin alienating and why is that not racist?

MAXWELL: Well, I'll just give you an anecdote. I grew up in an all white town. I was the only black student until high school. And so, my mom prioritized having symbols, traditional symbols, cultural symbols in the house that looked like me. So I could grow up as a young girl and be proud of who I am. That is really important as you developing your identity growing up.

And so, it is not about whiteness being problematic for me and seeing whiteness makes me feel shame. It's really about being proud of who you are, and seeing things, and understanding your history and your heritage. And I think that I had, you know, I had black Barbie dolls growing up. Just because my mom wanted me to have high self-esteem.

KELLY: Well, listen, Zerlina, thanks for coming on. We appreciate your point of view.

KELLY: Now, we're going to bring in Bishop Harry Jackson of Hope Christian Church, he is also radio talk show host. Bishop, your thoughts on this?

BISHOP HARRY JACKSON, HOPE CHRISTIAN CHURCH: Well, I think this is overblown. What you are dealing with is that Fox has a certain image. You are being attacked, I think unfairly. And as somebody who grew up seeing who -- saw people lynched, all kinds of things of that nature, I say some folks especially younger folks like your last guest should build the bridge and get over it.

We are dealing with the fact that St. Nick was actually a real figure. And it doesn't really matter what the skin color is. The idea that Aisha Harris had was that we're going to denigrate the religious value of Christmas. We are going to do away with the man's ethnicity and we're going to make him into a penguin. It's absolutely ridiculous.

KELLY: Somehow that didn't get any attention. Let's change Santa into a penguin. Instead what I said got attention.

JACKSON: Yes. But they were looking for you. And I think what we are dealing with right now is people are explosive. And they would rather talk about what you are saying in the kind of ideological kind of format instead of dealing with substance. We are not going to get past the race problem in America until we begin to deal with real issues, instead of all the stereo typical shadow boxing. And I think we can. Based on our faith, based on the Mandela model, based on MLK. I think we can overcome the race problem in our nation. But we are not trying hard enough, Megyn. That's my opinion.

KELLY: What do you make of, you know, we played some of the sound bites there. And people, I think mischaracterizing the segment by describing me as outraged over this and angry. If you watch it, and I don't know if we have the sound bite. But just, I mean, does this say outrage to you? Let's play it.

KELLY: But Jedediah, when I read the piece, the author seems to have -- you know, she's African-American. And she seems to have real pain, at having grown up with this image of a white Santa. And she speaks about it kind of honestly saying, I really didn't understand why that had to be.

JACKSON: Well, I don't think that that had anger. I think though if I'm hurt, if I'm bitter, if I have unresolved issues, any mention of these things causes me to rise up. And I think that's really part of the problem in America right now, we have got a 400-year-old problem starting with slavery. That's never fully been settled. And many times we talk around these issues. And now the problems we are having at the Capitol Building, Democrat versus Republican, all have racial implications as well. And it should not be, Megyn.

JACKSON: We can do better. We are better than that.

KELLY: You would certainly hope, you know, particularly at this time of year we can do better and try coming together. As I said in my opening, not to always assume the worst about each other. Don't we always just assume the worst and then we go on twitter and blindly say the meanest things we can possibly say.

I'll give you the last word.

JACKSON: Well, I really appreciate your having this segment. I think the way you treated your last guest who you could have vehemently disagreed with shows you do have tolerance. Keep up the good work. I think you will make a difference. We are going to change the way we deal with this issue over time.

KELLY: Thank you, Bishop. Merry Christmas to you.

JACKSON: Merry Christmas to you.