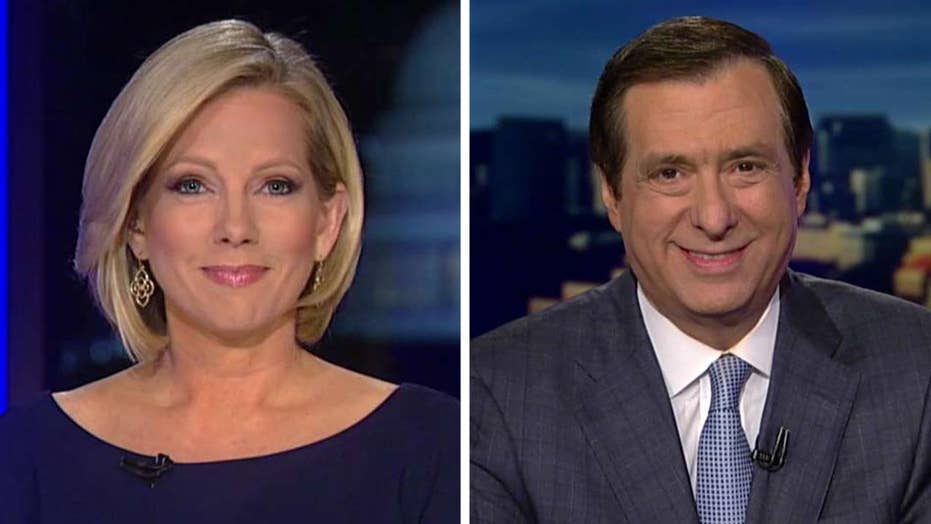 This is a rush transcript from "Special Report with Bret Baier," February 6, 2018. This copy may not be in its final form and may be updated.

SENATE MAJORITY MITCH MCCONNELL, R-KY.: I am optimistic that very same we will be able to reach an agreement.

SENATE MINORITY LEADER CHUCK SCHUMER, D-N.Y.: I have discussed some of the outlines with my caucus that I think we are very happy with, and hopefully the Republicans are. And then we can get something really good done.

SPEAKER OF THE HOUSE PAUL RYAN, R-WIS.: The only reason we do not have a full budget agreement is because Democrats continue to hold funding for the government hostage on an unrelated issue.

SHANNON BREAM, FOX NEWS: Some pretty spicy words from all over the Hill today on the issue.

Meanwhile, right now live on the House floor, you are watching as they are voting on the stopgap spending measure, another short-term measure to get to March 23rd. We will keep an eye on that voting, keep you updated.

Let's bring in our panel to help us do that: Fox News media analyst Howard Kurtz, author of the new book "Media Madness, Donald Trump, the Press, and the War over the Truth"; Rachael Bade, congressional reporter for Politico, and Jonathan Swan, national political reporter for Axios. Great to see all of you.

OK, so there's a lot of back-and-forth on this issue. The president said, his words again, I would love to see a shutdown if we don't get this taken care of. Jonathan, who got blamed last time? Who will get blamed this time?

JONATHAN SWAN, AXIOS: Democrats clearly got blamed last time and I think regret, some of them anyway regret the way that it panned out. This time if President Trump keeps saying this, it's very hard for the Republicans to claim that it's a Democratic shutdown.

I made a few phone calls after those comments to try and figure out what happened, was there a grand strategy behind it? It seems not. The consensus seems to be that it was an emotional reaction. And we've been hearing about deaths of people at the hands of illegal immigrants. So I don't know that this was a particularly strategic comment made by the president.

BREAM: Because the conversation today at the White House including in the briefing was about the MS-13 and outlining some of these really horrific cases of people who have lost their lives.

SWAN: And people forget the president really means this stuff. This is one of the issues, this and trade, immigration, he really cares about this stuff, and he thought about it for years. It's not like health care where he hasn't really had fully formed thoughts. He really does believe what he says on this issue.

BREAM: He does. It is something, Rachael, he talked about all through the campaigns way early in the primaries all the way through, and it was something people seemed to really respond to when he would talk about it in these crowds and in these campaign events. But today when he brought it up, you immediately heard the Democrats say it's what he wants. He wants another shutdown. And they're calling it the Trump shutdown. The last one, even though the Republicans tried to name it the Schumer shutdown, which is a little bit snappier, but they're still blame each other over the last one.

RACHAEL BADE, POLITICO: Look, I don't think it's going to come down to a shutdown this Friday. Lawmakers on both sides of the aisle, even though the president made these remarks, are saying they are going to pass a short-term spending stopgap.

And the timing of this is particularly interesting because Republican leaders in the House and Senate have been trying for months to get Democrats to drop their demands for a bipartisan DACA fix in order to do a long-term budget deal that gets the military stability, a huge priority for President Donald Trump. And it sounds like the Democrats are about to cave on that this week.

And this is a huge deal, a huge victory for Republicans if they can get Democrats to vote for a long-term budget agreement without a fix for DACA. And the president coming in and saying let's shut the government down, it has a lot of Republicans even scratching their heads at that.

HOWARD KURTZ, FOX NEWS: Shannon, the press is playing the president's remarks about a shutdown as a big threat. It's not. It's a poke. It's baiting the Democrats. There is not going to be a shutdown. The president I think probably knows that. I'm not saying he wasn't sincere in his comments, but we have just been through -- the Democrats played that card and it wasn't successful.

Also the president knows politically speaking that although there is broad support in the country for the Dreamers, there is not for shutting the government down over this issue. So the Democrats have to decide whether they would rather have some kind of immigration compromise if indeed it's possible to have one that would pass both houses or if they would rather have the issue to campaign on in 2018.

BREAM: OK, so let's move on to another hot topic. We touched on this today, this issue of DACA, immigration, of MS-13, of folks who have lost their lives at the hands, allegedly, in this case we are going to talk about an illegal immigrant, the Colts player and his Uber driver who were killed this weekend by a man who reportedly was driving drunk. He's here illegally, has been deported twice before. The president tweeting on this today, "So disgraceful that a person illegally in our country killed Colts linebacker Edwin Jackson. This is just one of many such preventable tragedies. We must get the Dems to get tougher on the border and with illegal immigration, fast!"

We have got a new FOX News poll that looks at this, how concerned are you about illegal immigration? And 64 percent say extremely or very versus 34 percent say not very or not at all. Rachael, people agree it's a problem. They don't exactly agree on the solutions.

BADE: I think that it is sort of the same thing you were mentioning in terms of Democrats wanting a solution for dreamers but not wanting to shut the government down over that. Same thing with illegal immigration. The country by and large, they want a solution for this, but, again, not at the expense of shutting down the government.

The president today is talking specifically in this terrible tragedy with the Colts player about loopholes that Republicans have been talking about for weeks now. They say illegal immigrants are often deported. The find a way back and the basically live here. This is an example of what we saw with this person who killed this player. So Republicans want to do something about it. It's controversial for Democrats. They are willing to talk about border wall money, but when it comes to actual immigration policies and actually picking people up and pushing them out of the country, that gets a little more tenuous, I guess, for Democrats.

SWAN: It's also an issue that polls just miss. And the reason for that is the intensity. If you are basically in favor of more high school visas, expansion to immigration policies, the kind of policies that the donor class and the establishment in D.C. support but Donald Trump's base does not, they don't on the whole support it with the same intensity as Donald Trump's base feel about immigration, how they care about illegal immigrants and wanting to deport some of these people. The level of intensity and passion is so different.

And we saw that in the gang of eight fight. They spent so much more money, the people supporting the gang of eight, than these immigration restrictionist groups, and yet the other side won in their dinky little offices in D.C. with no donor money, no establishment support, they won that fight. And it's because there is a lot of public passion about that issue.

BREAM: I want to talk about another top story that the president often talks about, not so much in the last couple days, but it's the success of the stock market, all kinds of new highs since he was sworn in. And Howie today after a couple of really rough days it finished up 567 points. Where do we go from here?

KURTZ: Hopefully crawling back toward -- the market was oversold and a lot of people were expecting a correction. But it's just fascinating, I've been saying on the air as the market has went to 24,000, 25,000, 26,000, that the press doesn't give the president much credit for the soaring stock market, and in truth it's a shorthand. There's a lot of factors in the economy that go into stock prices. But, I said, if the market had gone down that much, he would be blamed, and we did see that happening on Friday and on Thursday and yesterday.

So it seems to me that press ought to be a little bit more consistent. At the same time, the president has played a leading role in talking up the stock market is a major badge of success for his economic policies. When you do that, inevitably there are these drops, sometimes these plunges. And he kind of has to own this own this one even though he hasn't publicly addressed it.

BREAM: The White House saying today and yesterday they believe the fundamentals underpinning the economy are still strong and they are going to stay focused on the long-term events that play out here.