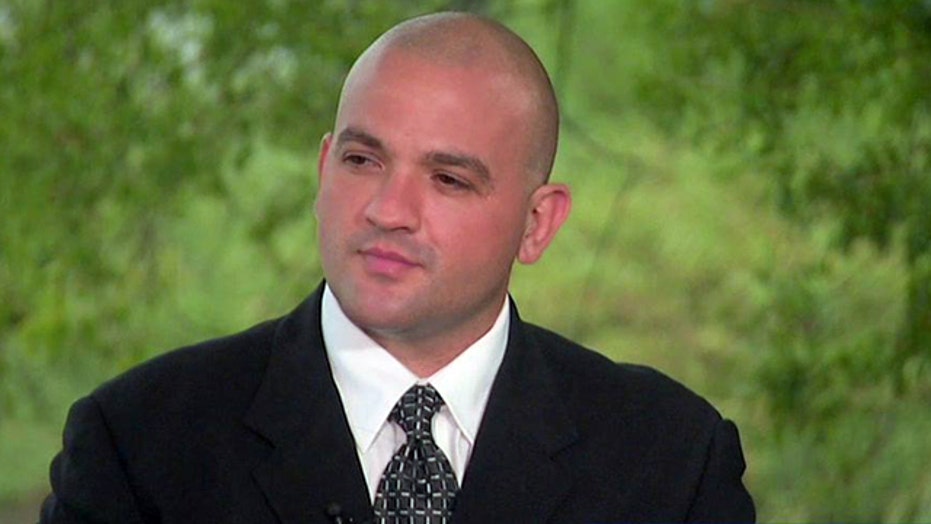 This is a rush transcript from "Hannity," July 10, 2014. This copy may not be in its final form and may be updated.

HANNITY: All right, that was President Obama playing politics and mocking Republicans for wanting to increase border security. That was back in 2011. But just over three years later, well, it's no laughing matter as a now surge of illegal immigrants are now flooding across the Texas border right behind me.

Hector, how are you?

HECTOR GARZA, BORDER PATROL AGENT: I'm very good. Thank you for having me.

HANNITY: You got in trouble for speaking out?

GARZA: Well, I'm the spokesperson for the National Border Patrol Council, which represents the men and women of the border patrol and also the support staff.

HANNITY: You've been told not to speak out.

GARZA: Well, it's been put out there before, yes.

HANNITY: Who told you not to speak out?

GARZA: Well, as border patrol agents, we're not allowed to speak to the media. However, as union spokespersons, we're able to communicate some of the information out to the media and to the community, and to the American public.

HANNITY: So you really are speaking for the agents that you talk to each and every day.

GARZA: That is correct.

HANNITY: OK. And they are telling you that our government, our federal government, is aiding and abetting in what's going on behind me?

HANNITY: Yeah. All right, Hector, I was in the briefing this morning, as you know. And in that briefing, I was told that people from Syria, Pakistan, Yemen, other countries, Afghanistan, are coming in and are being apprehended. Are your agents telling you about that?

GARZA: They are telling us that we're seeing aliens from all over the world, including some of those countries that you mentioned, yes, sir.

HANNITY: OK. And we hear about, quote, OTM, which stands for?

GARZA: Other than Mexican.

HANNITY: OK, meaning from other countries. Right now, there's a difference in the law, a distinction. If a child from Mexico comes here, they can be sent back expeditiously. But that's not the same because of what, the 2008 law that relates to kids from Central America?

GARZA: That is correct. What's happening is that we treat OTMs differently than we do aliens from Mexico or Canada. Right now, what's happening is that our government is pretty much releasing and giving these OTMs a free pass into our country. And we are very concerned about it. We want to make sure that our borders are secured and patrolled by our agents, and we want to be able to do our job.

HANNITY: Tell us about what the agents are facing out there every day. I talked to a couple that said they'd been shot at, rocks thrown at them. It's-- they've used terms like people-- the cartels are literally using military tactics. What are they telling you? What's happening to them on the border?

GARZA: Well, our agents are constantly under attack by these drug cartels, and it includes firearms (INAUDIBLE) having shots fired at them, walkings, assaults. And yeah, it's happening even in the Arizona border.  We've our-- the Mexican military even attacked our agents.

HANNITY: All right, so let me-- let me ask you about this. When you say that the federal government is aiding and abetting, sounds like they're-- they're supposed to be protecting this border. You mean aiding and abetting-- what do you mean specifically?

Now, why would anybody want to hire a smuggler when the U.S. government is actually doing it for free?

HANNITY: So in other words, when your agents put their lives on the line and there sometimes are violent incidents, and they do their job, those people that broke the law, they still end up staying. What does that do to the psyche, the psychology of these guys? What do they say to you?

GARZA: Well, our border patrol agents come to work every day with their head up high. They're very good on what they do. We are trained very well. However, at this point our resources are running dry and morale is at a very low level. But our agents continue to do the job as best as they can.

HANNITY: Is it true what we keep hearing in that the agents attention has now been diverted, that the boarders are less secure than ever because they now have to take care of all of these kids, all of these centers where all of these people are, and they're not doing the job that they were hired to do, not through any fault of their own? Is that true?

GARZA: Yes, it's very true. As a matter of fact, about 70 percent of our border patrol agents have actually been reassigned for processing duties, taking care of the aliens, feeding them, transporting them. And what that's leaving -- it's leaving a very porous border. So for the federal government to come out and say that our boarders are more secure than ever, that is a very naive statement.

GARZA: No, we don't. We do know there are high level criminal organizations that are very dangerous, and when it comes to the unaccompanied children that are coming to this country illegally, they're falling prey to these cartels.

HANNITY: One offbeat question. Remember agent Brian Terry was killed and Operation Fast and Furious. Are you still finding guns from that?

GARZA: No, we have not seen that recently. Not to my knowledge.

HANNITY: OK. Thank you so much for being with us. We really appreciate it.