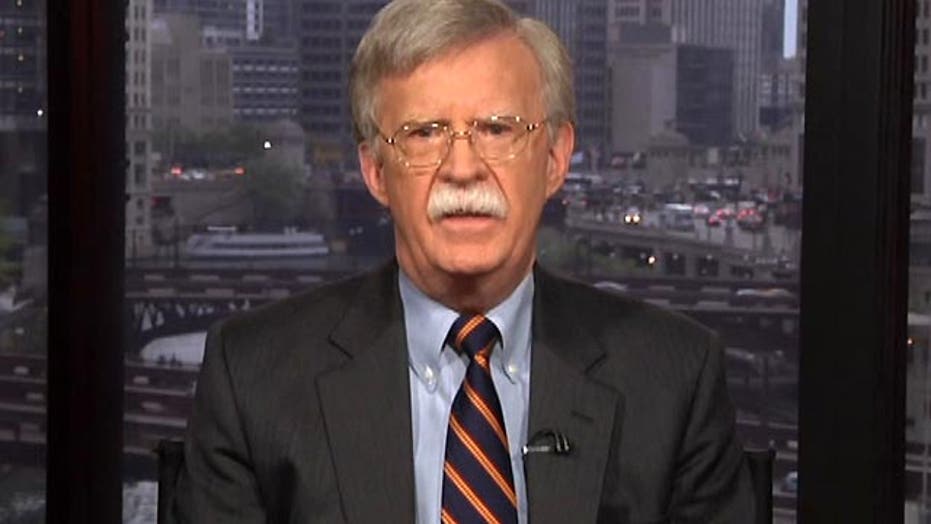 Bolton on Iran deal's chances, why he's not making 2016 run

Former U.N. ambassador on whether Pres. Obama will see his Iran agreement unravel at his summit at Camp David and why he decided not to run for president

This is a rush transcript from "On the Record," May 14, 2015. This copy may not be in its final form and may be updated.

GRETA VAN SUSTEREN, FOX NEWS HOST: So, what is with the Iran deal? Is it about to go up in smoke or will President Obama be able to keep our Arab allies happy?

JOHN BOLTON, FORMER U.S. AMBASSADOR TO THE U.N.: Good evening. Glad to be with you.

VAN SUSTEREN: So, Mr. Ambassador, what do you think about this summit?

BOLTON: Well, it was a catastrophe. The president's statement today was worse, I must say, than I expected. The so-called security guarantee isn't going to reassure the six oil producing monarchies of the Arabian Peninsula.

It's going to confirm in their mind that the president doesn't have a clue what the strategic threat of a nuclear Iran is. That wasn't a guarantee. That was a statement to think hard about what the United States might do if the Arab states came under threat.

I think they have seen how the president reacts to Israel, our closest ally in the region. I think what this means is they are going to -- the Arab states are going to pursue other alternatives.

And I mean specifically talking to Russia and China about getting them involved for further protection. It's a real deterioration of America's posture in the Middle East.

VAN SUSTEREN: I will tell you two things that caught my attention. One is they said we will meet again next year. The problem is June 30th is when this deal is presumably supposed to be worked out. Next year may be a little late for six Arab nations.

The second thing is the president says - this I was very explicit - the U.S. will stand by our GCC partners, people who were there against external attacks. The problem is that once you lift those sanctions, external attacks will be in the form of funding money to Hezbollah, to the Houthis, to do problems in Syria as well.

It's not like they are going to bring tanks from Iran and go over the border into Iraq. I mean, the way that Iran destabilizes the region is so much different than I think that people realize.

BOLTON: Well, exactly. And once they possess deliverable nuclear weapons. The mere threat of their use would be sufficiently intimidating, given the Iranian ability to stir up trouble among the region's Shia population.

They are going to get what they want. The only alternative which is what has started the nuclear arms race in the region the Saudis, the Turks and maybe others of the GCC countries are on their way to getting nuclear weapons. In this very volatile region you have multiple nuclear powers.

VAN SUSTEREN: But the nuclear weapons issue is a profoundly important issue and may get everyone in an arms race. I realize that but the other issue, which I think is almost as important, is if you give Iran all this money because they can do so much damage with the money in the very short run.

BOLTON: Well, that's why the idea that somehow or another there is a deal here that will prevent Iran from getting nuclear weapons, getting free of the sanctions and getting a lot more money in the short-term, look, the hotels in Tehran are already filled with European business people, ready to cut deals.

The sanctions regime is collapsing around our ears and everybody knows it. So, this event today, I think, only confirms for everybody, not just the countries that were there, but countries like Egypt and Jordan, Pakistan, not in the airplane world but across the entire Middle East and North Africa.

The United States influence is declining at precipitous rate. This is going to spin out of our ability to influence.

VAN SUSTEREN: All right, I have been needling you for quite some time to find out whether you are running for president or not. Every time we're on the commercial break you are on the set with me. You have now made that decision. You are not going to run for president. Tell me in just 30 seconds what went into that decision?

BOLTON: Well, I think as a very practical matter, it was not realistic for somebody in my circumstances to run. I don't like that, but you have to be realistic. What I am going to do is press the other Republican candidates to endorse robust American national security policies for the nominee to really understand and feel that the defending the country is the president's first responsibility. And making sure in November of 2016 that we don't make the same mistake we made in the past two elections.

VAN SUSTEREN: All right. So who do you like?

BOLTON: Well, at this point, I'm not going to endorse anybody. I think the contribution I can make is to keep up the discussion on national security issues, which I intend to do through a variety of vehicles. And keep the focus on Hillary Clinton's record as secretary of state.

VAN SUSTEREN: Ambassador, thank you for joining us.