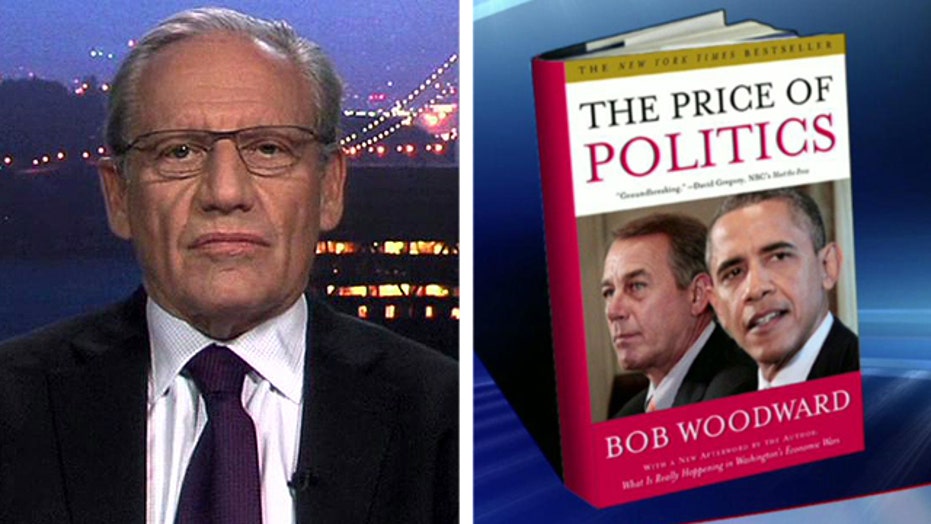 Renowned journalist suggests U.S. go back to the 'drawing boards'

This is a rush transcript from "Hannity," September 11, 2013. This copy may not be in its final form and may be updated.

SEAN HANNITY, HOST: While President Obama stumbled through his address to the America people regarding what to do in Syria, the man who promised to restore America's standing in the world now finds himself in quite a predicament. Although Obama recently pushed for a military strike against Syria, and then he decided to pursue Russia's diplomatic approach, my next guest pointed out just yesterday that the president -- who was awarded the Nobel Peace Prize -- had this to say about war when he was handed that high honor.

PRESIDENT BARACK OBAMA: Part of our challenge is reconciling these two seemingly irreconcilable truths. That war is sometimes necessary. And war at some level is an expression of human folly.

HANNITY: Joining me now with reaction to Obama's address and the entire Syria crisis is author of The New York Times bestseller "The Price of Politics." Now, that comes out in paperback on September 17th. Bob Woodward, welcome back, sir.

BOB WOODWARD, AUTHOR, "THE PRICE OF POLITICS": Thank you.

HANNITY: Little hypocrisy based on what he said then versus now?

WOODWARD: Well, first of all, if you look at the speech, overall, the center of it, the core of it is the moral outrage he feels about chemical attacks in Syria, particularly about the children dying on the cold hospital floor. And I think most people would share that outrage. Part of the problem here is that he does not make -- his moral argument is not clean simply because he says, OK, there is this awful atrocity. What we are going to do are these military attacks that don't really connect to the chemical weapons operation or the leader of Syria, Mr. Assad, whom Obama said several years ago needs to go.

So, the remedy is mightily insufficient. It's as if there is a murder in a house, a stabbing, and the police say, oh, we are going to go in and confiscate all the knives. It just isn't enough. And I think people see that disconnect.

HANNITY: Well, I agree when you say it doesn't suffice. I think you're right. I have a lot of trouble with what they have telegraphed in terms of what it is that they proposed here. John Kerry saying, it's going to be unbelievably small, no boots on the ground, days not weeks. And, no, this is not about the regime change that we called for two years ago. I have a lot of problems with that.

WOODWARD: I agree with that.

HANNITY: Yes. Do you think that could be effective?

WOODWARD: No. I think -- first of all, in fairness and you probably aren't going to agree with this, but I think this is a real tough case that Obama has. And there needs to be at least some sympathy in wrestling with it. I think they need to go to the drawing boards and think strategically, which is, what are our goals? They need to really lay those out clearly, did they want to get Assad out? Did they want to eliminate chemical weapons? Do they just want to kind of neutralize the situation so it is not in the news?

And then they need to look at what are the means that are available -- diplomacy, military action, covert action, which might work in this case or assist them in some way. And then how do you use those available means efficiently and coherently. And that's what they haven't done.

This doesn't add up. It doesn't make sense.

HANNITY: It doesn't make sense and they keep stepping deeper into it, if you will. The president drew his red line. OK? Did that a year ago. But then he comes out this week and says, no, that was Congress's red line. No, that was his red line. And similarly --

WOODWARD: He said it was the world's red line.

HANNITY: The world in Congress' red line. Right. And the regime change --

WOODWARD: To a certain extent that's true. It is the world's red line because there is this treaty. But he's got to lead and he's got to define here -- you know, he's trying the diplomatic track. I think he's found the Russians less hostile than the U.S. Congress. And so, he's playing that card now. I think you have to give him some time to do that. It could work. But, as I say, back to the drawing boards here. And really think this out and explain it in a way that somebody like you who is a real Obama critic will say, OK, at least that makes sense on the surface.

HANNITY: Yes. Well, forget about me. I think the vast majority of the American people reading these polls don't think this is a coherent policy.

You know, it reminds me a little bit of your book in as much as the handling of fiscal matters and it seems that they are not really managing the White House very well on very important matters. I don't see this president leading. I'm concerned the most here, Bob, about Vladimir Putin because he's been very hostile, sticking, poking his finger in America's eye and sending ships there and threatening to put a shield up in Syria. Now he's offering these defenses to Iran and calling John Kerry a liar. That Russian reset didn't work out that well, either.

WOODWARD: No, that's true. But you have to use all the options and try to take all of the paths. I think this is kind of part of the price of politics. You pay politics with these things and you don't solve the problem. In all the fiscal cliff negotiations, which I write about coming out in this paperback edition. I mean, it makes your head hurt and really explode.

HANNITY: That's painful. Yes. It is.

WOODWARD: They get so close. And it's not just Obama's fault. It's Boehner and the Republicans' fault, too. But they don't know how to negotiate.

HANNITY: But anyway, Bob, good points. I think it would be good advice if they adhere to it. But I don't know if they will. Thanks for being with us.