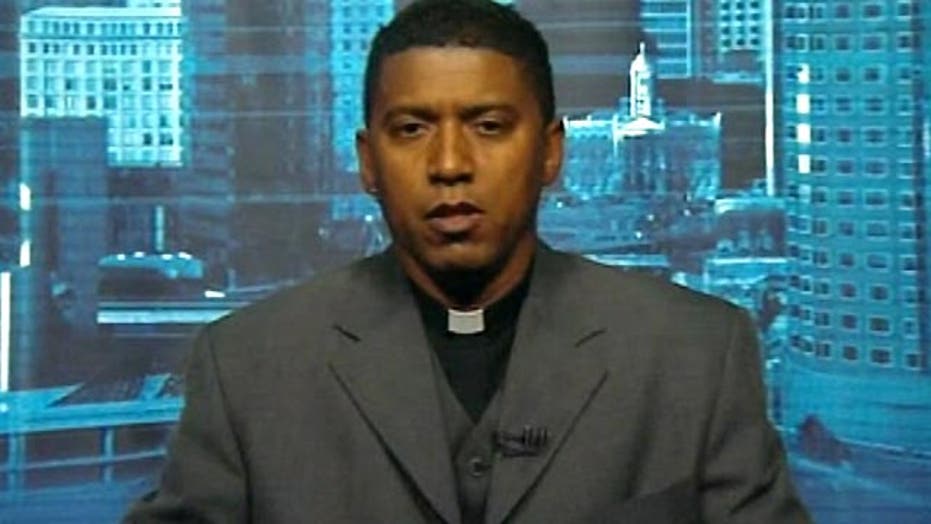 Black pastor: Why I called Sharpton a pimp

The Rev. Al Sharpton got an earful when he showed up at a Hartford, Conn. peace rally in protest of 5 homicides and tried to fundraise for his National Acton Network

This is a rush transcript from "On the Record," June 8, 2015. This copy may not be in its final form and may be updated.

MARCUS MOSIAH JARVIS, PASTOR WHO CHALLENGED AL SHARPTON: Good evening, how are you?

SUSTEREN: I'm very well. I read that you accused Reverend Sharpton of being a pimp.

JARVIS: Yes, that would be the case.

SUSTEREN: So what happened?

JARVIS: Well, we were having -- they were holding a stop the violence rally in Hartford, Connecticut and I -- I guess its invited was supposed to bring some attention to the plight in the city of Hartford. But once the rally and the march was ended, there was a gathering at Shiloh Baptist church and there was a offering or a demand for money, and I thought that that was hypocritical and contradictory to the cause. How are you going to ask a crime riddled neighborhood that's impoverished $400 each donation and -- without cause, it didn't say what the money was going to be used for. And so I thought it was pimp at him as its best.

SUSTEREN: Did you -- does he know you called him that? Has he responded?

JARVIS: Actually, no. Nobody has -- I have not heard anything from Reverend Al Sharpton or past supporter. I do know that, you know they are trying to be silenced by having me taken off the air, but the most -- the really most important issue is that we, as pastors need to come together in the community to fix our own problems. And we don't necessarily need outside intervention or marches that really, are not going to produce any type of solid results as to fighting crime and creating employment and jobs and a neighborhood that's rife with poverty.

SUSTEREN: You know, pastor, I'm so happy to meet you. We had a pastor on last week from Chicago. There are so many great, you know African-American leaders and pastors in these communities who are really trying to help in their communities. For the life of me, I can't figure out why President Obama has continued to work with Reverend Al Sharpton as a representative of these communities when they have -- when he has in some communities he is not been a wide member and -- well, he owes almost five million dollars according to the New York Times to the IRS. It's a scofflaw, yet he is the one they turn to. Why?

JARVIS: You know, I couldn't answer that question. It's a question that I have asked myself as well. I think we can do better as far as representation of the African-American community and hope. I can't say, you know I can't say he is all bad, we all have -- you know, the bible says for all has sinned and fallen short of the glory of God. I can just say in this one incident and it's something that prevalent for some reason in the church that needs to be addressed. Is that we do have some Sharpton's and some pimps in the pulpit that want to feed off the sheep, you know. Ezekiel 34 says warn to the shepherds who feed of my sheep, instead they should feed the sheep. What we need in the urban neighborhoods is economic development plan coming from the church, coming from the pulpit. Credited preparation, credit repair, home ownership, business entrepreneurship, these are the things that we need. We do not need --

JARVIS: Marches or political grandstanding by outsiders, as just to whatever it is, whatever their own agenda is. We don't need media attention. We need solid citizens put in place to address these issues.

SUSTEREN: Pastor, I'm very happy to meet you. Your community is very lucky and I hope people are listening and to you because you have some great ideas. Thank you, sir.

JARVIS: No problem. I also would like to say that Pastor Dion Watkins at Mount Olive does have programs that he has put in place to do just the very things that I'm speaking of and I just mentioned that I would mention him.

SUSTEREN: We'll check it out --

JARVIS: It will part of the rally, and again, my end result to all of this would be, that for all of us as pastors and clergymen as the body of Christ will sit down together as brothers and reconcile our differences and come up with sound systems to help our neighborhoods and our communities.

JARVIS: And thank you very much for having me --

JARVIS: And thank you for your time.