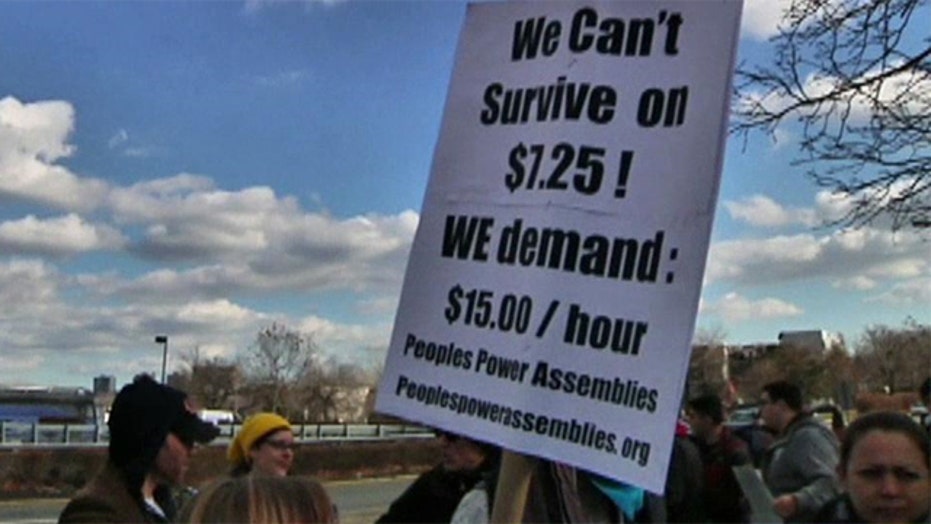 JOHN LAYFIELD: It's about trying to boost union membership. Government unions can promise whatever they want. Politicians don't care; they just want to get re-elected. This was not about wages, this was not about workers environment, this was simply about relevancy and a meal ticket that these union heads know they're losing if this trend continues.

DAVID MERCER: This protest was about the American working family earning a living decent wage. I think that labor sees what we should all see, which is a new trend line, where you have Massachusetts, California, Maryland, New Jersey and others taking the steps to finally raise the minimum wage and, in addition, you even have 69 percent of the public, the American public, according to a new CBS poll, saying they support an increase in the minimum wage. So you see the labor movement getting behind it.

TRACY BYRNES: Half of those protesters don't even work at Walmart. They're just all part of the union movement that is out there just to garner new membership. Employees seem to be really happy at their jobs and show up, many of them, on holidays. So these guys are out, they're out there every year. It's deja vu all over again with these Thanksgiving Day protests and they're not getting very far.

JONAS MAX FERRIS: The average worker hasn't really seen their wages or benefits go up for several decades adjusting for inflation. They don't really feel for the worker that's in a union that has good benefits and relatively high wages. They're not gaining support from the public and therefore not from politicians as much as they want. For the lower workers, this is an area they should have gone to a long time ago. If it looks like they're working crazy hours, low pay, low benefits, then they might get some public support from the country. The problem they're going to run into is that consumers want to shop this way and they want these stores open around the clock and they like low prices at Walmart. That's what workers have to get paid and how hard they have to work to deliver that to the consumer so the unions might not getting the backing from the public they think they're going to get on this.

GARY B. SMITH: It's about the American union working family. Let's be clear; this strike in no way benefits the American worker at large. In fact, it harms them because the unions are a monopoly. When you have a monopoly, you normally have less of something, not more of something. Less of something in this case is jobs. Because what do unions want? Unions want to charge Walmart higher than what the market will bear. If they want to go on strike and they somehow cripple Walmart and they can't pay, that's their right to do it and if they can extract higher wages, good for them. It's kind of the workers versus the Walmart Corporation. They're not looking out for the worker at large. If they were, they would forget about a minimum wage or any kind of contract, let's just let Walmart pay what the market will bear and if there's 1,000 people waiting to get a job, so be it. If Walmart can only get zero people waiting for a job, than they have to raise their wages in order to entice people to work there.

TRACY BYRNES: The ObamaCare website is only supposed to handle 50,000 people? That's it? That's crazy. This thing was destined to fail from the beginning and it's going to fail again. The Democrats are even told to tell people to not use it yet because they have to make sure it really, really works. They don't know what they're doing.

DAVID MERCER: It's a very complicated system, dealing with a wholesale change in the health care industry at large and you have a lot of variables that go into it. They will get the kinks out and get the website operational. Let's not say that the private sector is the panacea to all the ills facing the public sector. You've seen the banking industry; they deal with cyber fraud all the time and at a great cost to customers. So they're not the end all be all in the terms of trying to address it. We might do it in partnership with the private sector but it's a challenge for both the private and public sector in addressing the security breaches that loom on any site.

JOHN LAYFIELD: Amazon can handle 1 million transactions per second. Government handled six applications on their first day. This has nothing to do with cyber fraud and banking. That is trying to chase rabbits to get away from the issue. The issue the government doesn't do anything very well. You're supposed to have open source coding instead they had it all closed because they thought they could have done it themselves. You have hired any 22-year-old software engineer from Silicon Valley and he could have built it. Our government spent millions and failed.

GARY B. SMITH: People think the free market can't possibly work in health care and that's one of the reasons we need ObamaCare. But it has worked in health care, in cosmetic surgery. Since 1992, general medical expenses have almost doubled, up about 118 percent. Prices for cosmetic surgery have only gone up 30 percent. In fact, inflation adjusted, cosmetic surgery prices across the board are actually down. Cosmetic surgery is generally a private market. People pay for it out of their own pockets; it's rarely subsidized by insurance. It's a very competitive market. Right there in that one little niche of health care that's completely private the private sector flourishes.

JONAS MAX FERRIS: The government is not good at operating a business. The president is not a good computer programmer. The government is best at shifting money around, setting the rules, and basically doing what the free market's not going to do. Once they have to operate something like a government website, you're going to have a problem, because in America, the government doesn't do stuff.

NJ DRIVERS MAY SOON BE FACING FINES FOR EATING, SMOKING BEHID THE WHEEL

GARY B. SMITH: I think we've stepped over the line. The states have a responsibility to protect drivers, bad drivers from other drivers. For example, you can't jump in the car after drinking ten Budweiser's. That's clearly something the state should mandate. But this other stuff, putting lipstick on, where does it stop? So it gets into the point where the state tries to be the nanny, they overreach, and they mess things up.

JOHN LAYFIELD: There's a reason that 90 percent of America doesn't like our congress right now and that's because most lawmakers around the country waste their time doing stupid stuff like this. You can't legislate ignorance. We already have reckless driving. If a person's doing something that endangers other people, a police officer needs to stop them, write them a ticket and tell them not to do it anymore. This is ridiculous.

TRACY BYRNES: The coffee in the morning prevents road rage, it is important actually. The mascara thing maybe should be banned because that does freak me out when people put their mascara on while driving. But otherwise, stay out of my car!

JONAS MAX FERRIS: This texting thing is very dangerous, as dangerous as drinking a few drinks. The government has to do something about this. In this case, I'm for stricter driving and regulations for bad drivers out there.

DAVID MERCER: Anything that is going towards saving lives I'm all for. Otherwise people need to use common sense when they are behind the wheel.

JOHN LAYFIELD: Time is now to buy Time Warner; (TWC) up 20 percent in one year