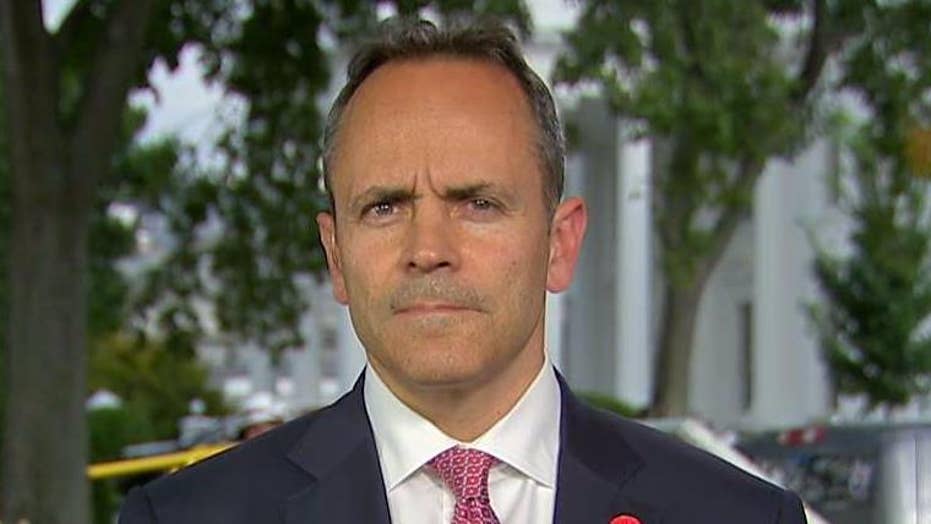 Bevin: Lowering the tax burdens is good for America

This is a rush transcript from "Your World," September 14, 2017. This copy may not be in its final form and may be updated.

NEIL CAVUTO, "YOUR WORLD" HOST: But with us right now is Kentucky Republican Governor Matt Bevin, who is at the White House.

Governor, thank you for taking the time.

Those are some pretty remarkable statements on the part of the president, to more or less say, I'm ready to pull the trigger on this. I'm ready to make this revenue-neutral, if, if, if by revenue-neutral, you include the bang for the buck you are going to get from lower taxes, which means, I guess, Governor, coming out the gate, it might produce worse deficits before we turn things around.

Am I interpreting that correctly?

GOV. MATT BEVIN, R-KENTUCKY: Again, I think as you noted even before I came on, the devil is in the details. It really is.

And there's still so much that is not yet known. That statement can mean many things. Revenue-neutral, truth be told, does mean different things to different people.

But I think he's been unequivocal and I very much, as a state, support him in this. As a taxpayer and a citizen, I support him in this, is the idea that lowering the overall tax burdens, not only on the employers, but on the individuals who are creating the wealth, is actually good for America. It really is.

And it does not have to come at the expense of those who also need what that tax basis provides.

Now, you're in Kentucky. Well, not right now. You're the governor of the beautiful state. So is Mitch McConnell. And a lot of people say that Mitch McConnell felt that he was sideswiped by the president negotiating with Democrats, first to increase the debt ceiling and attach hurricane relief to it, and now on DACA and some other matters.

Does that bother you?

BEVIN: No. I will tell you this.

You have not heard Senator McConnell say that. You have people say that on his behalf. One thing I will say about Senator McConnell, he's been in this town a very long time. He's a very pragmatic person. He understands how this city operates as well or better than anybody.

I don't think he's sideswiped by anything. And I think, in some measure, he, as a guy who has made deals through the years of all shapes, sizes and colors, understands that sometimes, to move the ball forward, you do what needs to be done.

And I applaud the president on, frankly, keeping his foot on the gas and moving the process forward.

BEVIN: He may have been. But I'll tell you, he has never shared that to my knowledge, certainly not with me or anyone else publicly.

Your sense of the tax cut, if it doesn't include -- whatever materializes on the 25th -- and it's not certain we will know all the details, then, Governor. But assuming we do or most of them, the indications are that the wealthy will not be included or, even if they are, with, you know, curtailing their write-offs, deductions, that sort of thing, they might -- some might be paying a little bit more.

How do you think the base, the Republican base will respond to that? The markets don't seem to care. What are your thoughts?

BEVIN: The markets will be moved by the most critical component, which, frankly, I think the base in general also supports, because they understand the ripple effect of it.

And that is to lower the overall corporate tax rate. We have a couple trillions dollars -- that's probably a conservative estimate -- that are currently offshore. If we could repatriate even a portion of those monies, even 20, 30, 40, 50 percent of those monies, the infusion of capital, if we drop the capital -- the corporate tax rate to, I don't know, 15 percent, 10 percent, lower, the devil again will be in the details.

And I think that one component alone would be the salve to make a whole lot of other perhaps things not being there very palatable to many people in the base.

BEVIN: Again, it's going to depend on what they are.

I can't on something that I don't even know will actually be there or not.
There's times when retroactivity is a good thing, other times when it maybe is not a good thing.

Here's what I will say. This is also not a single bite of the apple. To say that what is done now will be the only thing this administration will be able to do in the years ahead, I think, would be a mistake.

I think the key is, is to continue to move the ball forward, and this is what I applaud this administration for, is that despite all the vitriol, all the people rooting against them, they have continued to keep their foot on the gas on this front, on the health care front, on other fronts, including that which I have spent the last 2.5 hours speaking with this administration about, which is prison reentry and criminal justice reform.

A lot that is happening in this administration. I applaud them for that.

CAVUTO: All right, sir, one last question. And it concerns Mitch McConnell.

Of course, you might know his thinking and views better than I. But the president has made these overtures to Democrats, he's said and tweeted as much, because of what happened on the health care repeal effort and his frustration, maybe given the very little wiggle room he has in the United States Senate with 52 Republicans, that this was a way of advancing the ball.

And govern means being bipartisan, means reaching out to all elected officials in finding a common solution. And at the end of the day, the job of every single person who is sent to this town from their respective communities is to do the will of not only their constituents, but of the American people, and to do what is best for the collective whole.

That is what their job is. And if in fact the president can jump-start that by going this route or that route, I applaud him. And I hope he does more of the same.