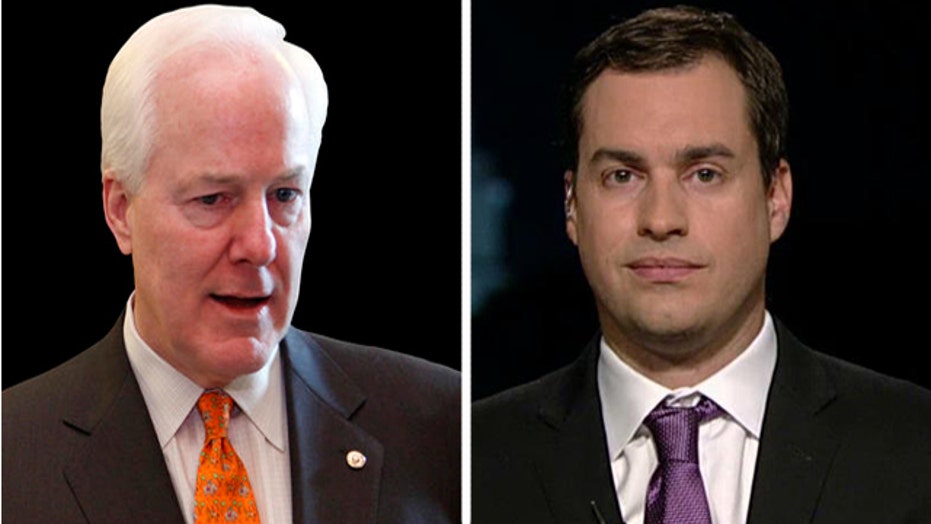 Ben LaBolt: We will see accountability for health care site

This is a rush transcript from "The Kelly File," December 2, 2013. This copy may not be in its final form and may be updated.

MEGYN KELLY, HOST: Breaking tonight, new reaction to our lead story. In the middle of a two-day debate over the ObamaCare web site, how well it's working now and whether we should trust the administration's claims. We got new sound from the number two Republican senator lashing out at the Obama administration. Listen.

SEN. JOHN CORNYN, R-TEXAS: I think the current administration has taken lying to a new level. To me, that's the one thing that I find most aggravating about what's happening in Washington these days. Particularly about this administration which is a lack of accountability and the willingness to mislead people or provide them false information and expect to be able to move on.

We have seen that most recently in the health care debate over if you like what you have, you can keep it. Something that we can go back to 2010 and demonstrate that the Department of Health and Human Services knew was false.

KELLY: Joining me now, Ben Labolt, founding partner of the Incite Agency, which is a strategy firm, and the national press secretary for Barack Obama's 2012 presidential campaign.

Ben, good to see you. Thanks for being here.

BEN LABOLT, THE INCITE AGENCY, FOUNDING PARTNER: Thanks for having me.

KELLY: Let's start with that, with John Cornyn suggesting this administration has, quote, taken lying to a new level.

LABOLT: I think the senator's comments were misguided and unfortunate. I think that Republicans have been rooting for the failure of the Affordable Care Act rather than taking steps to strengthen it. The president apologized to the American people for saying that if you like your plan you can keep it. I think that was refreshing that something that Americans didn't see from the prior administration when there was a credibility issue at stake. What he should have said --

KELLY: He didn't really apologize for that. He said, I'm sorry that people are finding themselves in this situation because of something that I said.

LABOLT: Well, I think that ultimately what he should have said was that many plans in the individual market are inadequate. They drop your coverage if you get sick --

KELLY: Let me stop you there. We have had the debate about what the president should have said. What Senator Cornyn is saying is that it was all lies, that this administration has been misleading and there is no accountability for the misleading. You were with Barack Obama for 2012 helping to push his re-election and health care was a major issue.

KELLY: Were you present for discussions about this line about people being able to keep their health insurance plans.

LABOLT: I worked for the president beginning in 2007 all the way through the re-election campaign and reforming health care was a key topic. I got to tell you, we tried every day to get everything that we said and that the president said right. It went through a research vet, a policy vet.

KELLY: Did you think you would get something wrong?

LABOLT: We were scared we would get something wrong. We vetted everything. There is an incredible amount of turn in the individual health care market --

KELLY: But you're not answering my question. There have been lots of reports about Barack Obama's advisers and so on being present and whether the policy people, the report from the Wall Street Journal was that the policy people said the president can't go out there and say this -- if you like your plan you can keep it -- it's not true. And the political people said, keep your mouth shut because your actual statement is not that salable. That's what the Journal reported.

LABOLT: I never discussed it with him. I don't ever recall having that discussion. Having talked to some of the people involved subsequently, what I know is that there is an incredible amount of churn and change in the individual health care market. These plans change over year after year after year. What Republicans have tried to do is blame the Affordable Care Act for all of the inefficiencies that exist in the health care market today. Ultimately, we preserved the private market, the pre-existing market.

LABOLT: They were weak policies that now need to meet a higher standard. They can't kick people off anymore.

KELLY: You can't keep saying that.

LABOLT: Because of a pre-existing condition or set a lifetime cap on their coverage. They have to meet that higher standard.

KELLY: You're dodging it.

LABOLT: Americans that were being dropped from these plans will now be offered stronger plans and in fact --

KELLY: Why are they being dropped?

LABOLT: Seventy percent of people on the individual market will qualify for subsidies or Medicaid coverage that gets them the stronger plan.

KELLY: Well, why were they being dropped? It goes back to whether it was a lie. The president said if you like your plan you can keep it, period. Now the insurance companies have come out and said that's not true. The only reason we are dropping people is because of ObamaCare. Your response is, those were crappy plans.

LABOLT: The president has acknowledged that statement didn't clearly communicate what he wanted to communicate to the American people --

KELLY: But was it a lie? That seems to be what Senator Cornyn is saying.

LABOLT: It gives people the opportunity to enroll in stronger plans and the president specifically addressed that and that he misled people. The administration is working every day to regain credibility. The ultimate test of this is going to be are people satisfied with the plans. There were reports today that four times the number of people who signed up to enroll in October signed up in November. In states that set up individual exchanges --

KELLY: I realize that, Ben. But you are trying to get 7 million by March so let's not lead the viewers into thinking this is some astronomical number.

KELLY: I got that. We talked about that earlier, that that's key. People have to get on healthcare.gov. They have to see lower premiums or subsidies. That could help a lot if it happens. That's what the law's defenders say.

KELLY: Let me ask you about this issue of credibility. David Plouffe, who you worked with as well, came out and said, look. The people trust this president. Right now the latest poll suggests not really. The majority don't or it is extremely close. Your partner in this strategy firm is Robert Gibbs. He was formerly the White House spokesman. He's come out and been very frank about his belief that this administration needs to hold someone accountable for the deterioration in trust we have seen. Somebody needs to get fired basically. You agree with that?

LABOLT: He has. I think ultimately we'll see accountability here. The real accountability is have we put in place a system that ensure that the program works? The administration has taken steps to do that.

LABOLT: They have brought in tech experts from Silicon Valley.

KELLY: Stop that. Come on.

LABOLT: A world class management expert to make it work. They are taking steps to ensure accountability.

LABOLT: What would you like to see, Megyn? How do you define it?

KELLY: I don't care. It's not up to me. I'm saying, don't tell me accountability for all the mistakes is to fix the mistakes.

KELLY: Accountability is to say you screwed up and here is the person. I don't know who it is. Is it Kathleen Sebelius? You tell me. Is it the person who runs Medicare and Medicaid? You tell me. Who is responsible?

LABOLT: I don't think it going to come down to any one person. There were 55 contractors involved in developing this.

KELLY: Who was their boss?

LABOLT: I think there was a problem that 55 contractors were involved in the first place.

KELLY: Who was their boss? Because one of the architects of ObamaCare came on --

LABOLT: That's why I think it was a great decision to put Jeff Zients in charge of the management of it, the implementation.

KELLY: Let me get this in and I going to give you the floor. One of the architects said -- and you know this. He wrote a public letter to the administration back in 2010 to Larry Summers who is advising, and he said, "Listen, I want ObamaCare to succeed , I'm one of the architects. But you have to have a CEO running this thing. I don't think the people advising the president, we can count on them. I see disaster coming." He was blown off. The question is whether there should have been a CEO and who made the decision not to have one. Should somebody be fired? Robert Gibbs, your partner, says somebody should be fired.

LABOLT: Listen. I agree that there should have been a CEO. I think there is a CEO in charge now in the person of Jeff Zients who is putting out these daily reports, who issued this progress report. We saw the turnaround of the website. I think that's going to be a successful model moving forward and it should have happened in first place.

KELLY: Good having you on.

LABOLT: Thanks for having me.

KELLY: Good to see you. All right, Ben, all the best. Hope you come back.