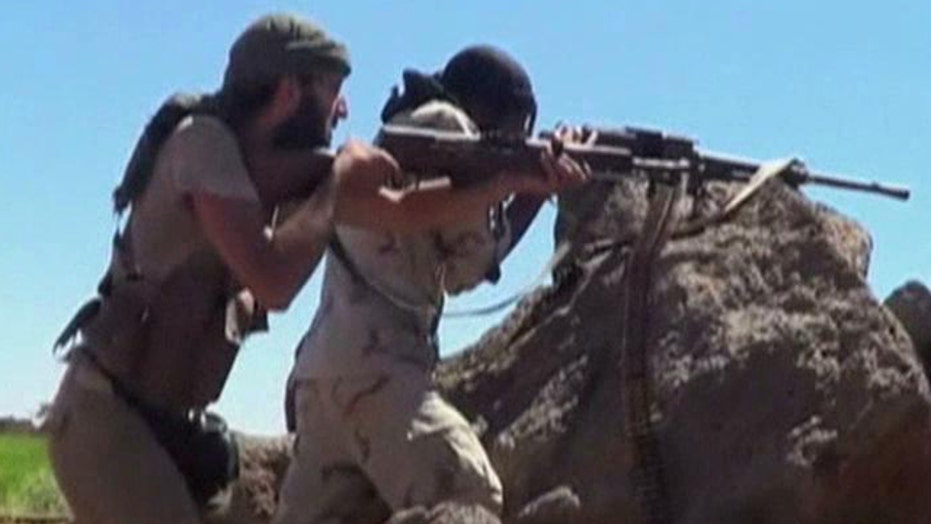 Battle erupts over cost of getting involved in Syria

KIMBERLY GUILFOYLE: Shouldn't we be purposeful about why we're doing it, and what specific outcomes and objectives we would like to achieve? Right now we're just burning fuel out there waiting for a President that is indecisive; the "waffle-er in chief", the commander equivocator. That's what we're waiting on right now. So you look at that economic cost, but you also have to look at it long term. How are we going to get out of this? And is he willing to do what it takes to completely disable, dismantle Assad and his regime. I think the answer is no; that's why there's so much hesitation.

WAYNE ROGERS: We know for a fact that in Afghanistan we've already spent $650 billion. A billion is a thousand million dollars. We're spending at the rate of $10.5 million an hour. Iraq has cost us $814 billion to date, with spending a day at the rate of $824,000 an hour. If you get into this it's going to cost you a lot of money and nobody knows how much. They can't guess. Also, at the same time you've got to remember Senator Kerry testified before the congress and he said there is an offer on the table from the Saudis to fund all of this. So who knows. Do you believe Kerry?

JUAN WILLIAMS: I didn't hear on the right anybody raising this cost issue when we were talking about going into Iraq, going into Afghanistan. I don't think it's a relevant issue. It's a small amount of money. Wayne, a man who's experienced from "MASH," just told you the cost of what we've been doing in Afghanistan and in Iraq. This is piddling by comparison. I think it's like $40 million for a carrier group out there in the Mediterranean every week. That's significant money, but it's not going to slow down the recovery; it's not going to send us back into a recession. Given the instability in the Middle East and oil prices, I think it actually helps.

JONATHAN HOENIG: Americans, I think, would gladly pay any price-whether it's in lives or treasure-for American interests. But to sacrifice American treasure for these savage Islamists is treasonous. Senator Kerry, or I'm sorry, Secretary of State Kerry, it's like should we take some solace in knowing that just a couple of the people we're helping are Al Qaeda fighters? Our soldiers are not sacrifices. They're rational, they're self-interested, and to send them off in any element of harm's way for Al Qaeda's children I think is criminal.

MORE AMERICANS SMOKING POT AS STATES LEGALIZE IT AND TAX IT

JONATHAN HOENIG: All drugs, especially pot, should be legal. Not only because it would raise a lot of money-- $20 billion a year-but even more because government has no right to tell an adult what he or she can put in their bodies. Legalization of pot, that notion was very common in the 1970s. Eleven states had decriminalized it. That changed, unfortunately, once Ronald Regan came into office. We've spent a trillion dollars on the war on drugs, and you know what? The drug addiction rates have not budged since the 1970s. Legalize it and allow people to not only be free, but fix some of the deficits we've run up in this country.

KIMBERLY GUILFOYLE: I have a hard enough time trying to get my son to do his homework as it is. The last thing we need is a bunch of potheads running around. I'm a former prosecutor. I have never tried marijuana. I'm happy to be missing out, trust me. For me I think it's not so simple. It's not going to be the budget windfall of cash just by legalizing it, and I think it's naïve to think that. Jonathan's attacking it from a different, Libertarian standpoint about "hey we have our own privacy rights, keep the government out." That's a different argument. Right now what we've see clearly is the Obama administration with Eric Holder is not going to criminalize marijuana. States like Colorado and Washington are going to be setting the standard. While you might see some law enforcement costs go down, you're not thinking about the healthcare cost and the effect on Americans' health, as well.

JUAN WILLIAMS: I just think Americans have made the choice here. The state legislature for state referendum says its legal, well they want it legal. I think all the benefits you just laid out, not only tax revenue, but the absolute, incontrovertible failure of the war on drugs tells you a big issue in this discussion, especially when it comes to the spending. We spend a ton on this, and it gets us into a ton of trouble.

WAYNE ROGERS: Juan makes a good point. Whether this is a states' rights issue or a federal issue is separate. We have an example of this. We have booze. We had a Constitutional amendment that said do away with booze. We're not going to have any more booze in this country." That didn't work because, as you said, the people had already embraced it, and so we canceled that. That went away. We have the same thing here with marijuana. It's a good lesson. People are embracing it. They're going to smoke it. Decriminalize and tax it.

WAYNE ROGERS: It's idiotic, Eric, is what it is. Can you imagine spending taxpayer money on advertising the virtues of allowing congress to trade on inside information, for example? Or to advertise that the income tax is a great idea and we should all be paying it more. It's just dumb and it's a misuse of our funds.

JUAN WILLIAMS: I don't get it. Of course they should do this! They have an obligation to make sure Americans are aware of it. And what happened in Massachusetts with Romney-care? He went to the Celtics, he went to the Patriots, he went to the Red Sox-and they helped him. And when the President tries to do it, then the Republicans say "oh no this is terrible." Of course he should do it.

JONATHAN HOENIG: I want to correct Juan. Government's role is to protect individual rights, and that's it. So what else is this other than propaganda? If ObamaCare was so wonderful why would you need to advertise it? Why would you have everyone looking to get exemptions from it? Why does no one want to participate in it? It operates solely by force, including these ads, which-to Wayne's point-is pretty ironic. They tax us to advertise an entitlement that we're forced to participate in anyway.

KIMBERLY GUILFOYLE: Keep ObamaCare out of mama-care too. We don't want it. Nobody wants it. Even his little "besties" in the unions want to opt-out from it. I mean this is a disaster. He's selling like a used car that has no engine. It doesn't work, it's flawed. So this is a misuse, I believe, of government dollars.

WAYNE ROGERS: Drive away with profits with Ford (F)