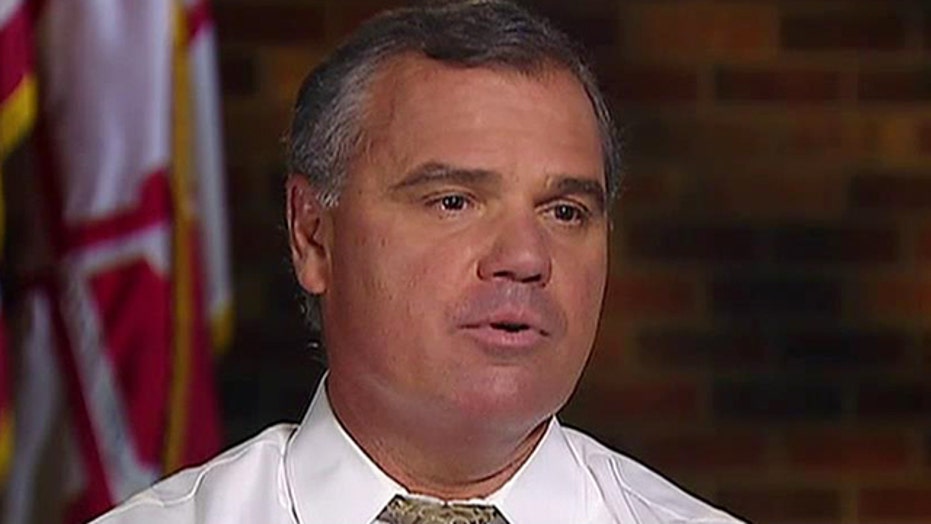 This is a rush transcript from "On the Record," May 29, 2015. This copy may not be in its final form and may be updated.

GRETA VAN SUSTEREN, FOX NEWS HOST: What about our police? Are police officers across America under siege? Now many men and women in uniformed now getting blamed for the ills in urban communities like Baltimore. Police are fighting back, pointing out it's the politicians who get the money and who are supposed to fix things, but are not. So are police feeling burned?

Right now, in Baltimore, arrests plunging and murders surging. The Freddie Gray riots are over but the violence is not. And many officers say their fear getting arrested after the indictment of the six officers in Freddie Gray's death. Lieutenant Gene Ryan, president of the Fraternal Order of Police in Baltimore going ON THE RECORD.

VAN SUSTEREN: No surprise why I'm here. It's because of what's been happening in Baltimore. And you have been quoted as saying that the police here feel under siege. Why do you say that?

LT. GENE RYAN, PRESIDENT, FRATERNAL ORDER OF POLICE, BALTIMORE: Because this is a very violent city. It's a very tough place to work. I mean, law enforcement -- anywhere you go, it's a hard job. But they are not getting the support they need. Everywhere they go, they are getting challenged. They are just -- they are being attacked at every different angle and they're not getting the support they need and deserve.

VAN SUSTEREN: What is the support they need?

RYAN: They need to be backed up, from the city hall, from the top of our agency, and from the states' attorney's office. After they charged those six officers, my members don't feel like they are getting the support that they deserve.

RYAN: Yes, absolutely. Right now -- and this has been going on for several months, everything Ferguson started, but it's aspirated now. They are more afraid to go to jail for doing their job properly than they are of getting shot and killed right now.

VAN SUSTEREN: And why do you think she has reversed that?

RYAN: Because she overcharged and she is trying to, I would assume, build her case for when it comes time to go to court. But the Supreme Court ruling is already in place. The officers did exactly what they are allowed to do, what's within the guidelines of the law.

VAN SUSTEREN: What happened -- do you have any idea what happened to the man in custody, Freddie Gray?

RYAN: Obviously, no. Obviously, I haven't seen the evidence that was presented to the state's attorney. And that's -- I mean, all along, I always just want everybody to slow down, take a deep breath, let the investigation run its course, and that's to look at the facts, and then move forward and make a decision.

VAN SUSTEREN: You think that the state prosecutor, Mosby, did not do that?

RYAN: No. I don't know how she can review a case folder for a death in one day. I mean, I don't think -- I think she rushed to judgment.

VAN SUSTEREN: Is this sort of -- almost sort of throughout the entire police force that they are sort of thinking that she is the one who is not standing behind them?

VAN SUSTEREN: Why is that?

RYAN: Because of what happened to the six officers. We feel in the law enforcement community -- and the facts haven't been discovered yet, but from what we have seen -- and, you know, the union is standing behind all six officers -- that they were overcharged. When she gave her opening statement at the press conference, she had the perception that she was the prosecutor, the judge, jury and executioner. She has already found the officers guilty and they haven't had their due process. They haven't had one day in court.

VAN SUSTEREN: Do you think the police are getting blamed for the problems in Baltimore?

RYAN: Yes. Absolutely. The police department is getting blamed for everything that's happening because we are easy targets. But you can't blame the police for lack of jobs. We didn't create that problem. You can't blame the police for all the money that's been put into this city, $130 million worth. We are not the one responsible for rebuilding the neighborhoods, but we are getting the blame for everything that goes wrong in the city.

VAN SUSTEREN: Where did that money go?

RYAN: I don't know. It's a very good question. Where did the money go?

VAN SUSTEREN: And you have some politicians that have been in office a long time in the city?

RYAN: We have politicians that took advantage of the crisis just like the criminal element to where they are using this to get out in front of the camera so they can prepare for 2016 elections. But if you are in power for several years, up to 35 years, where were you at when the neighborhoods and the citizens needed you? While all of the sudden now are you going to come out and say, oh, I'm going to save the world or save Baltimore city? Where were you for the last 35 years?

VAN SUSTEREN: That must burn the police in town to get blamed for all of this.

RYAN: Yes. That's what I meant by we are under siege. I mean, we are getting blamed for everything. We are not getting the support we need. It's a very tough job. Let's face it, a second in law enforcement is a lifetime. I have seen a lot of officers get killed over the last 32-plus years.

VAN SUSTEREN: Why is Baltimore so violent?

RYAN: Well, there's several different reasons. The drug trade. Right now, they feel emboldened, the criminals. It's just a small element. The majority of the citizens who live in Baltimore support the police officers. It's just a small percentage of criminals that are taking advantage of this crisis. And that's why there's a spike in crime. You know, the homicide shootings are up, violent crimes in general.