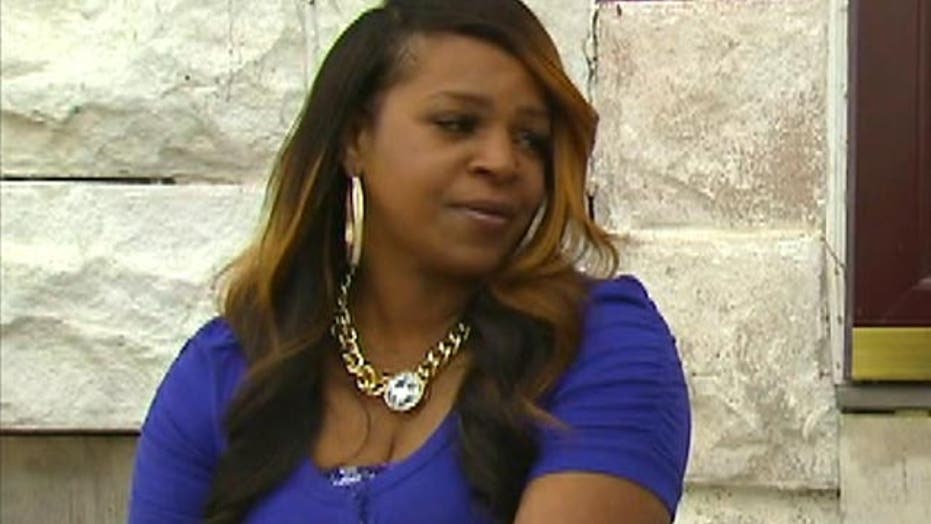 Baltimore's 'Mom of the Year' on sudden fame, saving her son

Toya Graham the notoriety that has followed her after she yanked her son away from the Baltimore riots, the climate in the city, and more

This is a rush transcript from "On the Record," May 1, 2015. This copy may not be in its final form and may be updated.

GRETA VAN SUSTEREN, FOX NEWS HOST: We will go to our next guest, who is the "Mom of the Year," and she's been called that because she yanked her son off the street when he was rioting in Baltimore.

Even Oprah gave her thumbs up. I sat down with the mother of six, Toya Graham, right here in Baltimore. This happened moments ago.

VAN SUSTEREN: Toya, first of all, I have to tell you that I'm very happy to meet you.

VAN SUSTEREN: You have become someone everyone wants to meet. I guess you've seen -- everyone calls you the "Mom of the Year."

VAN SUSTEREN: Well, your life's turned - changed a lot - in the last couple of days.

GRAHAM: Yes, it has.

VAN SUSTEREN: Tell me what happened. You were home and when -- were you watching TV and watching the protests?

GRAHAM: No. I was actually at a doctor's appointment. But Michael had already mentioned to me that this activity was supposed to be going on at Mondawmon. And so I said to him not to be there. Do not go. Go to school and come straight home. While I was at the doctors, my daughter was telling, "Ma, we have to go." We have to get down to Mondawmin [Mall]. They shut down the schools and they're shutting down the Mondawmin. And so we rushed down to Mondawmin and there are so many police officers down there and helicopters and the helicopters were flying very low.

I asked one of the police officer where were the kids that usually catch the bus. And he pointed to the opposite side. And so I started walking over towards bus station. And a lot of police officers were standing there with the shields and at that time the rocks had started being thrown. I wasn't that far from them. So I actually could see. It's something about when you are looking at it on the news it looks different from when you are right there with it. I turned around and Michael was coming across the street.

VAN SUSTEREN: So you saw him from about how far away?

GRAHAM: I've seen him with the rocks. So my first thing was put the rock down, then at that time. And then, at that time, I was just so angry that he would be a part of what they was down there doing and that's where you see the anger came in at and the force I had with him.

VAN SUSTEREN: All right. Now, did he see you coming do you think? Because you took off after him like.

GRAHAM: Well, he made eye contact with me, but he did try to get away at some point.

VAN SUSTEREN: Are you a tough mother?

GRAHAM: I am a tough mother.

VAN SUSTEREN: How many children do you have?

GRAHAM: I have five girls and one boy.

VAN SUSTEREN: They all know who is boss in the family?

GRAHAM: It's not so much as boss. I am not just their mother, but I am their friend, too. We have a lot of things that we just do as a family.

VAN SUSTEREN: We saw the video. You have a salty vocabulary.

GRAHAM: Yeah. I apologize for that.

VAN SUSTEREN: Does your pastor know about that yet?

VAN SUSTEREN: And I guess have you been given be a solution on this one, right?

VAN SUSTEREN: You got a pass on this?

GRAHAM: I got a pass.

GRAHAM: He was like, "Mom" -- he kept calling my name. And at that point, I was telling him to take the mask off, you know, because if you're down there throwing rocks, why are you covering your face? Once I got him in the car, I just kept asking him what did the police do to him? Let me not say that I understand my son was angry for a lot of reasons, but to be out there doing what police have been accused of doing - that two wrongs don't make a right.

VAN SUSTEREN: So what -- what should we do? What should the community now do? I mean how do we change things because there is a lot of sort of hostility in this community? How can we now take this horrible experience everybody went through and try to make it better? What's your thought?

GRAHAM: Well, before Freddie Gray, there was always hostility towards a lot of the residents and the police officers. They are here to protect and serve us, but we are also human beings first. And a lot of times we don't get that respect from the police officer and they want to be given. I see a lot -- I believe a lot will change now. I heard that we are now getting a lot of cameras for the police officers. I think that will be a big change. We need a lot of community centers helping these young -- youth so they won't be out here doing vandalism and things of that nature. And as we came together for Freddie Gray, I think we need to continue to do that for each other.

VAN SUSTEREN: Do you think your son is going to do this again?

GRAHAM: Oh, I don't think he is going to do this one again.

GRAHAM; I don't think he is going to do this one again. Is he the perfect child? No, he is not. He has his flaws. But as a mother, that's what I'm here for, to help him get through it. He made a bad decision and I was able to be there. And as long as I have breath in my body I hope and pray I'm able to be there if he makes another bad decision.

VAN SUSTEREN: What a great mother. Her son says he regrets rioting and will work to do better.