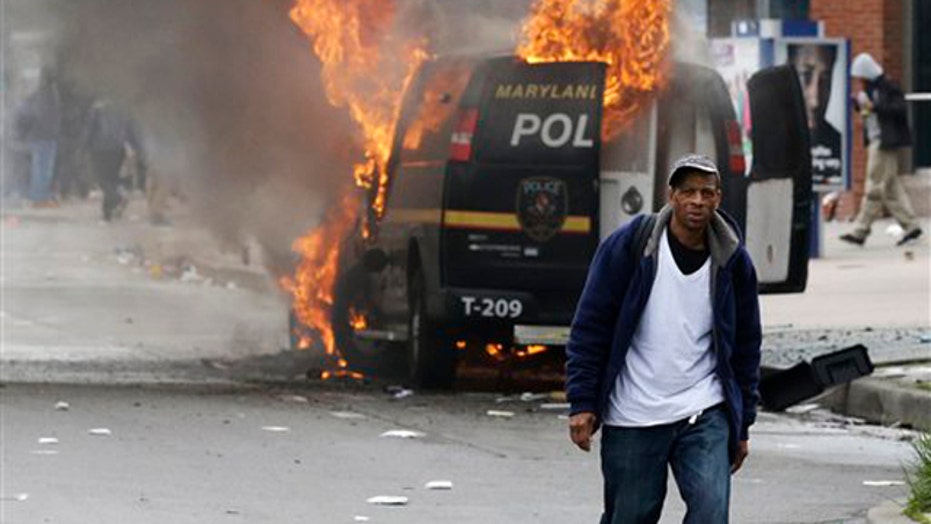 Is Ferguson to blame for the Baltimore riots?

Brit Hume weighs in on 'The Kelly File'

This is a rush transcript from "The Kelly File," April 28, 2015. This copy may not be in its final form and may be updated.

MEGYN KELLY, HOST: Joining us now, Fox News senior political analyst Brit Hume. Brit, nobody twisted her words. She said that. So, you know, that's just -- she said it. Now she may not have meant it. But that wasn't how she came after it. And now she's under criticism for saying that in the first place and handling this crisis in the second place for the same reason, which is she didn't want another Ferguson on her hands.

BRIT HUME, FOX NEWS SENIOR POLITICAL ANALYST: Well, that's what I think, Megyn. I mean, I think the contrast in the early stages here between happened in Ferguson and how the police responded and what happened here could not be more stark. In Ferguson you may recall when the trouble started, the police came in heavy with the big tactical vehicles and the heavily armed police, weapons at the ready and the rest of it. And you remember all the criticism of the militarization of America's police departments and all the questions were raised about how the military sells too much gear to the police. And it was thought that was in itself provocative and a major cause of the violence that we saw in Ferguson.

Here, it seems the authorities were determined not to repeat that. And so, in the early going, the night before last and again last night, they came in light. They stayed back. And you heard in addition to what the mayor said that you played, and look, I don't doubt that she intended to say something other than what she said. But what she said described exactly what she did. She talked about de-escalating. She talked about best practices.

HUME: Right. And we saw repeated instances in which the police, where were the trouble was, and they back away. Repeatedly they backed away. Now it was said today that they backed away because these were just kids after all, but these are some pretty violent kids on those streets and they were committing crimes, assaulting police officers.

KELLY: Let me just fact check that. Let me just fact check that. Because that's been represented before. That cannot be true because I listened to that presser from the police. And what they said was at that one mall they didn't want to go after these kids because they were kids. They were 15 and 16-year-olds. That doesn't explain what we saw throughout the city of Baltimore last night.

KELLY: Where there were 250 arrests, 90 percent of which were of adults. But there were pockets all over the city where we saw them setting residential homes ablaze and the cops stood by. It wasn't all 15-year- olds.

HUME: Well, we had a particularly vivid episode last night where on the street corner where Leland Vittert did so much reporting last night, where the police were up close and face to face with the protesters. And then at the urging of some city council members, or one city council members, they backed away. They came back later. But I mean, you kept hearing about how they were -- they were present -- you could see they were present, and yet the liquor store was looted and burned. The convenience store was looted, totally looted and the police stood by and did nothing. This was in my judgment how they decided to handle this because they didn't want a repeat of Ferguson. The belief was what was done in Ferguson didn't work very well. But clearly this didn't work very well either.

KELLY: Uh-uh. And at the heart of all this, Brit, you tell me. Is there an underlying assumption that the police are out to do harm? As we heard, you know, our reporters suggest many there believe tonight that these cops who are regular people, who are actual human beings, that they're out to hurt this community and that they are the ones who need to be controlled, not the criminals?

HUME: There is tremendous -- obviously tremendous antipathy toward the police. And we were given to believe post-Ferguson, Megyn, was the problem there was that the Police Department was predominantly white and the community was predominantly black. Well, here's a police department that's majority black. Here's the city hierarchy which is predominantly black. The mayor is black. The police chief is black and the rest of it. And you know, the entire city council is -- not the entire city council --

HUME: The vast majority of the city council members are black. So this is basically a black-run city and a predominantly black city. So the skin color of the authorities doesn't seem to make a difference based on these two cases.

HUME: And there's also -- the other thing is that the amount of crime that is committed and the number of suspects arrested in Baltimore in the black community is way out of proportion to their size within the community. They commit most of the crime, they -- they are most of the victims. And they are most of those arrested. And in a situation like that where you have these inner city pathologies of crime and drugs and the rest of it, the police presence is bound to be something that everybody's aware of. And it is not at all unexpected that there would be tension. I think that's what this is about.

KELLY: Meantime, this mayor said on that council that was supposed to examine what happened in Ferguson and how to prevent it from happening again. And it may be Brit that the mayors on that council came to the conclusion that you have to let the protesters burn things down. You've got to let them loose.

HUME: Well, I think that the theory seems to be based from what we can sort of extract from what they say and what they have done is that they're trying to keep something even worse from happening, that the violence could be even intensified. And I'm sure they're on pins and needles tonight waiting for 10:00 to roll around where this is much large presence of the street, to see what affect that house. Whether that will now work. One hopes it will. I certainly hope so. I live not far from Baltimore and once worked over there. You hate to see a great old city like that undergoing this horrible experience. But I don't think we know yet how this is going to play out.

KELLY: You do see many citizens out there tonight trying to stand up for their city and for peace and condemning the thuggery. And trying to actually -- we saw pictures earlier of a little boy handing out water to the cops, little African-American boy handing out water to the cops. And we saw other folks trying to protect cops in certain instances. But the problem is the law abiding citizens Brit are probably going to go home in about 40 minutes and not everybody there is going to obey this curfew. And that's the problem that these law enforcements have.

HUME: Well, that's the worry that you have. And the hope is of course that the size of the police presence will be enough to suppress this with minimal violence and damage. Certainly something to hope for.

But I want to add one more thing. You know, the president came out tonight -- this afternoon, I should say and said some good things about this, some sensible things about the criminals who were doing criminal things. But the president also did something that he often does when it comes to discussing the pathologies of this inner city neighborhoods. And he tends to gloss over the responsibility that the people who live there may have. He speaks of the drugs that are in those communities and a big part of the life there and the crime as if these are things that sort of happened to these people and as if they bear no responsibility for them. And I remember the woman that was interviewed at some length with Leland Vittert last night, she was obviously a law-abiding person, she deplored the violence that was going on. When it came time to discussing the police and the relationship with the police, she just went off. And what she said I thought was almost entirely incoherent. But it's completely of a piece with a lot of what you're hearing from the other people in that neighborhood over there.

KELLY: We're going to have a panel of police officers on President Obama's remarks coming up. Brit, thank you so much.