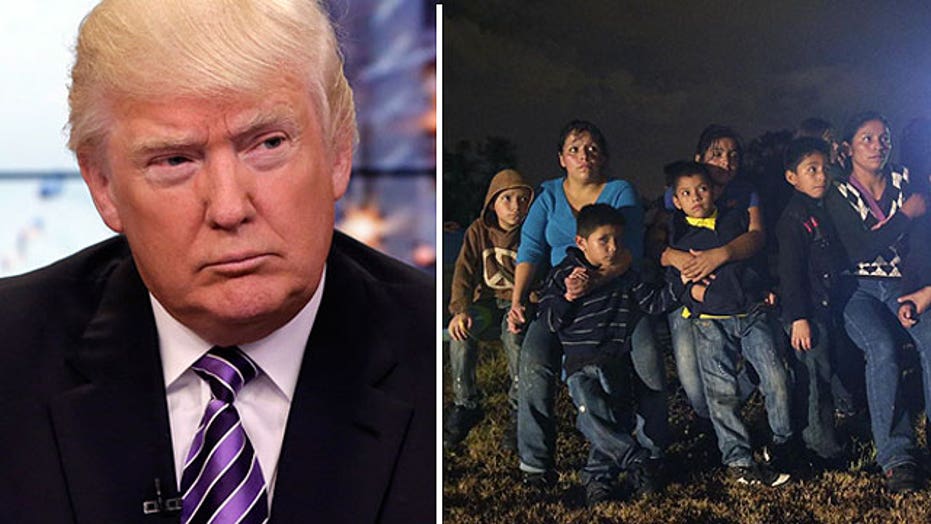 Reaction from the All-Star panel in Friday's Lightning Round

This is a rush transcript from "Special Report," July 3, 2015. This copy may not be in its final form and may be updated.

DON LEMON, CNN ANCHOR: Why did you have to say they were rapists?

DONALD TRUMP, REPUBLICAN PRESIDENTIAL CANDIDATE: All you have to do is go to Fusion and pick up the stories on rape.

LEMON: That's about women being raped. It's not about criminals coming across the border entering the country.

FORMER GOV. GEORGE PATAKI, R-N.Y.: Yes. We have to secure the border. Yes, we have to know that people are coming here legally, but that type of comment is just beyond the pale. And I reject it and, by the way, Trish, I'm calling on every other Republican candidate to stand up and say that what Donald Trump said is wrong and they should repudiate it.

DOUG MCKELWAY, GUEST ANCHOR: The one and only Donald Trump. I think the last time I filled in for Bret here on this show was the day that he announced it, that on that occasion, Charles, I asked you, did he have any redeeming characteristics and you said no.

CHARLES KRAUTHAMMER, SYNDICATED COLUMNIST: Well, I was searching for one and I gave it a good effort.

MCKELWAY: But that was -- my question is, he's got 10 percent of the vote in New Hampshire right now among Republican voters. Just in third place behind two others. So he is doing very well. So there is something that he is striking with the American public.

KRAUTHAMMER: Herman Cain also had his moments, so did everybody else in 2012. That doesn't impress me. I think the problem here -- apart -- look, there's a double standard in the press. There is no reason why every other candidate has to respond every time some Republican like the guy in Missouri talks about legitimate rape, Todd Aiken. It becomes incumbent on every other Republican has to give an answer. It never happens with Democrats.

But put that aside, look, this is the strongest Republican field since 1980. Perhaps since 1860. And then in comes this guy, spouting about the Mexicans in a way that is really outrageous and everybody is -- and the debate revolves around this, whereas it should be revolving around a lot of other issues. People say well, he's raised the issue of immigration.

You know, Jeb Bush and Marco Rubio and the others have not needed Trump to raise the issue of immigration, particularly in this way. It's definitely hurting the brand and distracting the entire debate.

MCKELWAY: Juan, Hillary Clinton said to that point recently I think he is emblematic. It's not about him, it's about everybody. She is attaching this to the entire Republican field.

JUAN WILLIAMS, THE HILL: Well, if you were attacking Republicans, wouldn't you? I mean, this is the problem for the party. On a strategic basis, the problem is that they would like to do well with Hispanic voters. It's critical for them going into the general election. And I think the reason I differ with Charles about the media attention here is this is very different than when a Democrat says something stupid.

This touches on some critical issues for the Republican brand. Immigration is just a big issue for Republicans. Do they have a workable alternative?
And secondly the composition of the party, that the party is becoming almost all white. So the question is, can you do outreach effectively going into the general election in a way that would combat Hillary Clinton?

TUCKER CARLSON, 'FOX & FRIENDS' CO-HOST: I'm not joining the pile-on and the reason that Trump's comments, which were naughty, have found such resonance is because the people who run this country have done a terrible job protecting the integrity of our borders. They ignore the very concept of sovereignty because it doesn't suit their needs politically. And people look at Trump and they say I may not agree with everything you say, but I appreciate your willingness to say it.

Moreover, in the very same moment this happened, the mayor of New York, America's biggest most powerful mayor, decides he's going to crush Trump because he disagrees with his views. And then the administration decided it's not going to enforce immigration laws. But what are debating? We're debating these fundamentally irrelevant comments from Donald Trump. Have we lost our capacity to have a rational conversation about issues that matters? It looks that way to me.

MCKELWAY: Perfect segue right into the next item in the "Lightning Round."
The immigration policy of the Obama administration have been scaling back deportations. It sounds to me like this is mere wording. They never had much deportation policy to start with, Charles.

KRAUTHAMMER: Look, in this country, if you want to change the illegal immigration laws, you should be doing it in Congress. Obama knows he can't, so what does he do? He issues an executive order. A judge says that that's illegal, it's unconstitutional and that has stopped. But that hasn't stopped Obama. He's now gone ahead and by administrative maneuvering has essentially enacted a law which gives amnesty, which is completely unconstitutional, and I think outrageous.

You want to do it, you want to debate the substance of this issue. And there is a lot to be said for a generous treatment of illegal immigrants.
But that should be an issue that's debated in the country and decided in the legislature, not by regulation. And not by orders that get issued by the head of Homeland Security.

WILLIAMS: It was a good bill and it spoke to the security that the wall that Tucker is concerned about. But I'm saying that the key here is that they're concentrating, prioritizing people who are criminals. People who are threats in terms of gangs and drugs. That's not a bad thing.