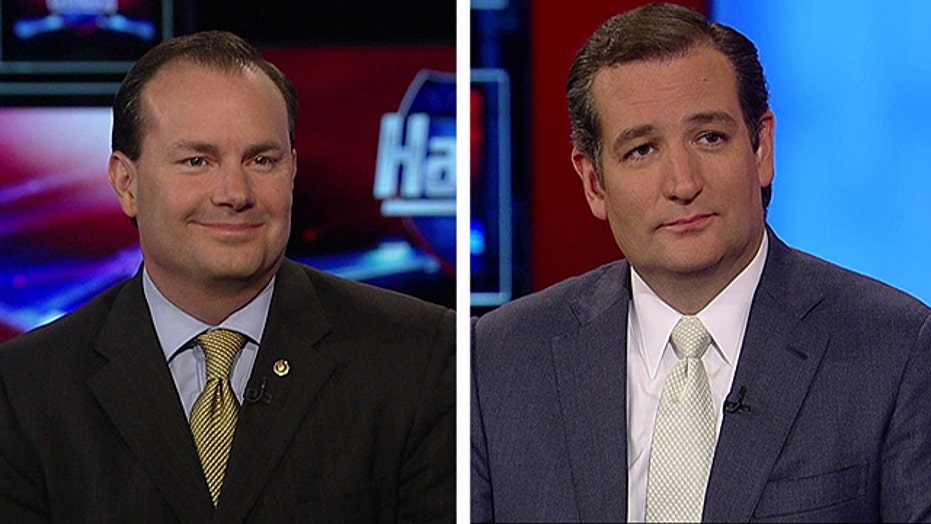 Are Republicans closer to defunding ObamaCare?

This is a rush transcript from "Hannity," September 18, 2013. This copy may not be in its final form and may be updated.

HANNITY: Air high five, like an air kiss. How are you doing? Good to see you.

SEN. MIKE LEE, R-UTAH: Great to be with you.

HANNITY: All right. This is now front and center. The CBO came out with numbers this week. Want to explain what they said?

HANNITY: Yes. You know, there was a meeting of franchises in Washington and we have SeaWorld. Then we have 603 small business survey. Here's what they said, "ObamaCare is the single biggest factor driving the growth in the economy and mandatory health care spending." They point out ObamaCare raises taxes by $770 billion over the next ten years. Senator Mike Lee, they say, it is unsustainable.

LEE: It is unsustainable. It's going to kill jobs, it's going to result in a lot of people either losing their jobs, not being able to get jobs or having their hours reduced. Doctors hate it because it will interfere with their ability to practice medicine. Families hate it because most families recognize that this will make their family's health care situation worse, not better.

HANNITY: I applaud him. But I will tell you this, there was a very different tune that they were playing last week in the House leadership. And it was really the people in this country that I would say forced them to change position positions, because they came up with that parliamentary maneuver last week which would defund ObamaCare and fund it at the same time, so.

CRUZ: Well, but today's announcement is a big, big deal. You know, a few weeks ago, early in the ObamaCare defund fight, every gray beard in Washington said there is no chance of this going forward. And today is a victory for House conservatives that stuck their neck out, that endured a lot of criticism. And today is a victory for Speaker Boehner.

And I agree with Mike. I commend House leadership for listening to the American people. They did their job. They stood up. And this is a bold decision, and I look forward to working with Mike to fight in the Senate to support this decision for us to succeed in defunding ObamaCare.

HANNITY: All right. There seems to be a lot of misunderstanding. Explain what you first proposed, because you really got the ball started here.

LEE: Sure. What I proposed from the very outset was that we agreed that we would fund government and defund ObamaCare. I have never wanted a shut down, never called for a shutdown. I want to avoid a shutdown. What I'm saying is that, we have to fund every other priority in government. Ted and I and other are willing to fund even programs that we don't like as a compromise gesture in order to avoid having to fund ObamaCare. And as a condition for making it possible to defund ObamaCare and thereby achieve a delaythat's what we want.

And what I'm saying is, you know, they passed this thing without a single Republican vote three years ago. Since then, this law and what we know about it has not improved. Since then, it was unconstitutionally re-written twice by the Supreme Court. It was unconstitutionally re-written three or four, five more times by the president. This is not OK. And it's proving to be increasingly unaffordable. And so, what we need to do is say, let's keep everything else in government funded at current levels as required by the Budget Control Act. But let's defund ObamaCare and delay it.

HANNITY: You know what the critics are saying. And I have been arguing with conservatives because they keep coming back, "Hannity, we want it gone as bad as you do, but tactically it's not smartest thing to do because you know that the Republicans will get blamed for the shutdown and the media will blame them." How do you answer that?

CRUZ: Well, the answer is that we've got to win. We've got to respond to the American people. There's a series of steps, the first step -- and what Mike and I have devoted every waking moment for the past several months to doing -- is motivating and energizing the American people. You know, we have seen in just a matter of weeks over 1.3 million Americans go to don'tfundit.com, sign a national petition, call their representatives, call their senators.

Look, today's decision is a victory for the American people. Those 1.3 million Americans -- and an awful lot of them came as a result of your show -- that went and signed that petition and spoke out. Today the House of Representatives answered the call.

HANNITY: Going to talk about blood, toil, sweat and tears.

All right. Let's talk about -- all right, Boehner, I'm assuming now the House will go forward with the CR that defunds ObamaCare. Walk us. The House passes that. Goes to the Senate. What happens next?

LEE: OK. So, what happens next after it passes the House is that at that moment once the House passes this, the only people who can produce a government shutdown at that point are Harry Reid and the Senate Democrats and the president of the United States. If they are willing to say to the American people, "Look, because you want to defund ObamaCare even though you're willing to fund everything else in government, we are going to shutdown the government"?

I don't think they win that fight. I don't think they can make a persuasive case to the American people that ObamaCare, this law's that's not ready to be implemented, this law that's going to make health care unaffordable and is being unfairly implemented, not to mention unconstitutionally altered by the president. They cannot win the argument that they should fight this and that they should shut down the government simply because they want to stand behind this law that the American people fundamentally reject.

What's your reaction? Is this extortion as he says?

Now, if he wants to talk about matters that are unprecedented in American constitutional history, it's this, this new major entitlement program with its unprecedented cost that was rammed through both houses of Congress without anyone having read it, without a single bipartisan vote. That's unprecedented. Rewriting that law five times, that is unprecedented.

HANNITY: So, let me just be clear. So, you will pay our debts, our obligations, you will fund the military, you will fund every department. You will fund Medicare, Social Security. Everything will be funded but you are saying don't fund ObamaCare. Constitutionally, you are an attorney and former attorney general. That's legal, isn't that in the constitution that spending begins in Congress?

CRUZ: Well, not only that. That is the most important check Congress has on an overreaching executive, the power of the purse. Listen, this is a president who sadly has disregarded the law over and over and over. And when it comes to ObamaCare, he's been picking and choosing political favorites. So, he granted exemptions to every big corporation in America, totally contrary to law. He granted exemptions to every member of Congress totally contrary the law.

This fight Sean, very simply is about one question. Will hardworking American families get the same exemptions that President Obama has given big corporations and members of Congress?

CRUZ: That's what this fight is about. And we got the power of the purse under the Constitution, the Congress has, to force the executive to threat the American people fairly.