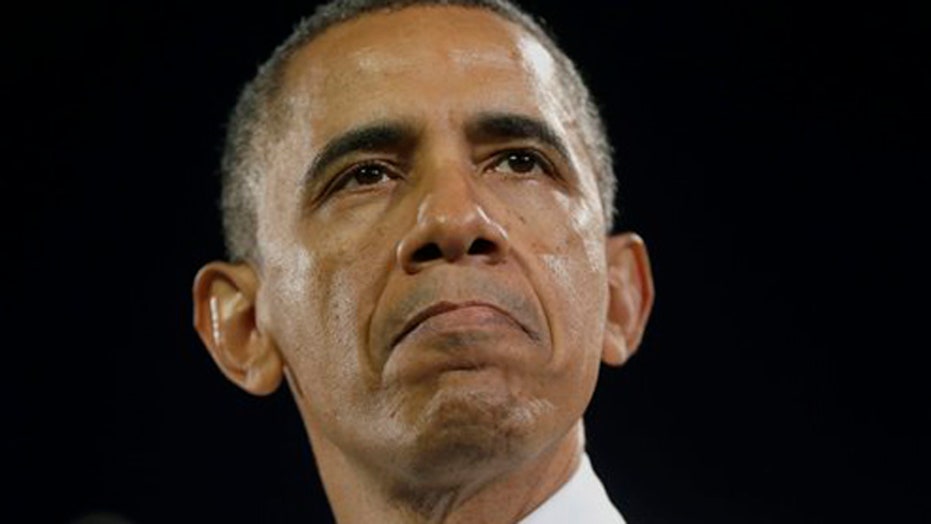 Are Democrats fed up with ObamaCare?

This is a rush transcript from "The Kelly File," November 25, 2013. This copy may not be in its final form and may be updated.

MEGYN KELLY, HOST: Welcome to "The Kelly File." And the big story tonight everyone, the president working a series of west coast fundraisers while a growing number of Democrats are now sending warnings to the White House. With just days to go before a key deadline, they are prepared to break ranks over ObamaCare.

Good evening, everyone. I'm Megyn Kelly. Earlier today, we got the latest in the series of polls now showing plunging political fortunes for the Obama administration. A CNN poll shows 53 percent of the country now does not trust our president. Fifty three percent. The first time since Mr. Obama took office that this poll shows a clear majority does not believe that he is either honest or trustworthy.

And it comes at a critical time for his presidency. The next big ObamaCare deadline is just five days from now. That is when the administration promised to have healthcare.gov working. And if it is not working, reports tonight suggest that vulnerable Democrats are prepared to turn their backs on the White House and even could go on the attack.

Marc Thiessen is a fellow at the American Enterprise Institute and a former speech writer for President George W. Bush. Marc, good to see you.

And so this report in Politico spells it out. They spoke with several Democrats, they talk about how they are angry, some of them, and how they had it. They say, a week after the October shutdown, Democrats were experiencing a euphoric high. This is a New Republic headline that's even worse about how the entire law is threatening liberalism.

In any event, they go out and say, we thought we had Republicans on the math, we thought we're going to win back the House and then the rollout fails. And now we are concerned we're going to be kicked out of our seats. And they are prepared apparently, Marc, to start joining Republicans in these oversight committee hearings aggressively to start openly pushing back on the law and its mandates and its deadlines. Where is this going to go from here?

KELLY: What a difference now. Because I mean, this political article spells out how these Democrats are getting ready to break ranks. And they've about had it. They are not so satisfied by Joe Biden's, "It's going to be working, God willing," insurance.

And now they are getting ready to not necessarily put on Republican team Jerseys, but according to the article, they are predicting that the next oversight hearings that are coming up in December are going to get, quote, "ugly." And that the talking -- the discussions, excuse me that the White House has been having with them have not quelled the fears at all, that when the White House told them when they all went up to Capitol Hill, "We're going to get the website working, it's going to work out," there was open eye rolling. Because it's not just the American people who think the president is dishonest, Marc. It's the Democrats, too.

THIESSEN: Yes. Well, I mean, think about it. Three strikes and you're out. The first strike was saying if you like your plan, you can keep your plan, which we now know he never intended to do to keep that promise. Second strike was going out to the American people in saying, "I've got a fix," except he didn't have the authority to do the fix and so millions of people are losing their plans anyway. The website is the third strike. Now, if the website doesn't work, then you know, he said the vast majority of Americans, that website is going to work. Most people vast majority, that's like 95, 98 percent of people. No. They just said, they rolled it back and said that means if 80 percent works. So 20 percent of Americans are not going to get that promise kept for them.

This kind of stuff over and over again, they keep violating the first rule of holes which is when you are in one, stop digging. They keep making promises they can't keep instead of going down in saying, "We're going to fix this problem, here's how we're going to do it, it's going to take time, it's worse than we thought, but we're going to get down and enroll in states and fix it."

KELLY: You pointed out yourself, that -- put the website aside for a second.

KELLY: There is only so much they can say about the law itself. Because even the New York Times is now acknowledging, the whole law is a redistribution scheme.

KELLY: It is meant to take from some people and give to others. And even the New York Times is using terms like, as a result of this law, there are going to be, quote, "losers."

KELLY: Because it's exactly the opposite of what they were told.

And these Democrats are in a really tough position, Megyn. Because they're dammed if they do and they're damned if they don't. We're hearing these reports they're going to go after the president. You know, I was in the White House in 2006 when George W. Bush was president. He was toxic and the Democrats took over Congress. And if these Democrats don't -- if they distance themselves too much from the president, they alienate the liberal base which still loves him.

THIESSEN: And they need those people to turn out for them.

KELLY: Yes. But there is so much on the line right now, Marc. There's so much in the line. I mean, and we put up this headline when you were talking in the first answer. Because we pulled it from the New Republic, OK, the New Republic, this is a left-leaning publication. Look at the headline. "ObamaCare's threat to liberalism." I mean, it goes beyond ObamaCare. And let me just read the viewers one excerpt, OK, from this article. "Liberalism has spent the better part of the past century attempting to prove that it could competently and responsibly extend the state into new reaches of American life. With the rollout of this law, the administration has badly injured that cause... It has stifled bad news, fudged promises. It has failed to translate complex policy into plain English. It can't even launch a damn website" -- quoting them -- "What's more, nobody is responsible for the debacle has lost a job or suffer a demotion. Overtime, the technical difficulties can be repaired. Reversing the initial impressions of government ineptitude won't be so easy." That's the liberals talking.

So, all the Congressional Democrats and Senate Democrats who are vulnerable, they want fixes. They want Obama to allow people to stay in their plans, and the liberals don't want that, they want to push people out of their plans. That's why all the blue states are rejecting the fix. California, 1.1 million people lost their plans. Eighty thousand signed up. They are not letting them keep their plans because the left doesn't want to jeopardize ObamaCare.

So, there is this counter pressure where the Congressional Democrats want Obama to back down and the left doesn't want him to back down, and that's what the fight is going on within the Democrat Party.

KELLY: It's a broken promise either way. Either you can't keep your policy as he promised or you can keep it and the premiums are going to skyrocket on the exchange, and it could potentially be the beginning of the death spiral. We heard that from the architect of ObamaCare himself. Marc, thank you.