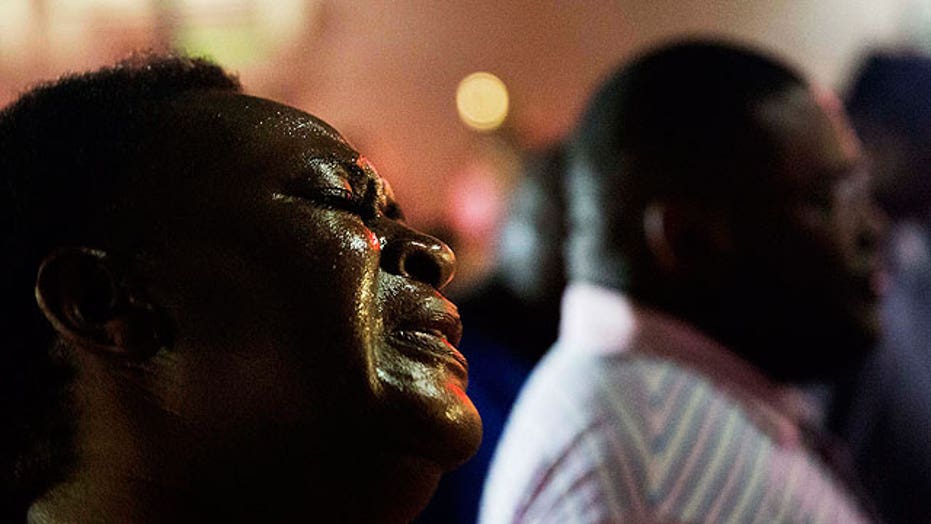 Are black Americans in danger?

O'REILLY: "Back of the Book" segment tonight. The terrorist Dylann Roof who murdered nine people in South Carolina apparently confessed to his crime. There are also reports that he singled out black Americans simply out hatred.

Joining us now from Milwaukee, the sheriff of that county, David Clarke. Some African-Americans believe they are now in danger, Sheriff. Do you see it that way?

DAVID CLARKE, MILWAUKEE COUNTY SHERIFF: Well, I don't. First of all I don't speak on behalf of all black people and everybody processes fear and danger differently as you know. But, as a Black American myself, I don't fear -- I don't live in fear in the United States so far of the type of heinous act that happened in the church of South Carolina. May God comfort the survivors and the people in the Charleston area. Look, persons fear and danger perception has to be based on rationalization.

I face more danger and I fear more danger putting on my uniform every day and going into the American ghetto to police. And as a black victim and I have talked to a lot of the black victims of crime, they face more fear and danger at the hands of other black people in the terms of victimization, in terms of crime than they do from some anomaly, an outlier where some kook goes into a church and sprays a place up with bullets killing people who are in prayer.

CLARKE: No, that's hyperbole and that's demagoguery. And whoever said that, they're well aware of that. That's become a cottage industry unfortunately. When they want to keep this animosity stoked up, this division between the people, but I got over that a long time ago, Bill. I just do not view everything from the prism of race. I guess that I don't have to fear that, you know, some may have, but I think the guy that you're talking about, that's just pure hyperbole and demagoguery.

O'REILLY: Okay. But there are groups like the Ku Klux Klan and the American Nazi Party who do target people because of their race and blacks are among the targets, but I think their numbers are very, very small and as far as hate crimes are concerned in your experience in Milwaukee, which is a diverse city, you've got, you know, a lot of different kinds of people there, do you deal with hate crimes a lot?

O'REILLY: I know. But you know what I'm talking about. The definition of the crime is solely committed and this guy Roof is a good example of the color of his skin, the religion based or something like that. Do you come across that?

CLARKE: No. No. I mean, hate is an emotion as you know and it's not something that we're going to be able to legislate or prosecute our way out of but I don't experience that here in the Milwaukee area now.

O'REILLY: Okay. We also dealt in this program with guns and I said quite clearly the way to solve or at least diminish the gun violence problem in America is to have mandatory federal sentences for people, criminals, who commit crimes with guns. Would you sport that?

CLARKE: Oh, wholeheartedly. And I think this what were falling down, that's the weak link here in Milwaukee County, anyway, we refuse to get tough on prohibited persons with firearms. People who have used them in the past against other human beings, to intimidate, to frighten to take property.

CLARKE: Start there, I think we'll be a lot better off.

O'REILLY: You have gangs in Milwaukee, right?

CLARKE: A very short period of time. These gangs fear the federal system. They do not fear the local prosecution because they haven't shown that they have the teeth behind anything that they say to get people to change their behavior. And that's what we're talking about, with gang activity. We're talking about lifestyle choices and behavior.

O'REILLY: Right. So, you could have investigate people, known gang members, as soon as they walked out of the house and thought they had a gun on them, they're gone. And that would break the gangs not only in Milwaukee, but all over the United States and how much crime would vanish if that happened? It's amazing.

CLARKE: A lot. A lot. A lot Bill and I think that's the heart of the problem is here, even with the case in Charleston, it's not the gun. It's the behavior. But as a society, we have to send a different message to the criminal perpetrator, we're not going to put up with their nonsense. So, we're not really doing that right now in terms of prosecution. Society has said enough, but our prosecution has become too lenient.

O'REILLY: All right. Sheriff, as always, we appreciate it.