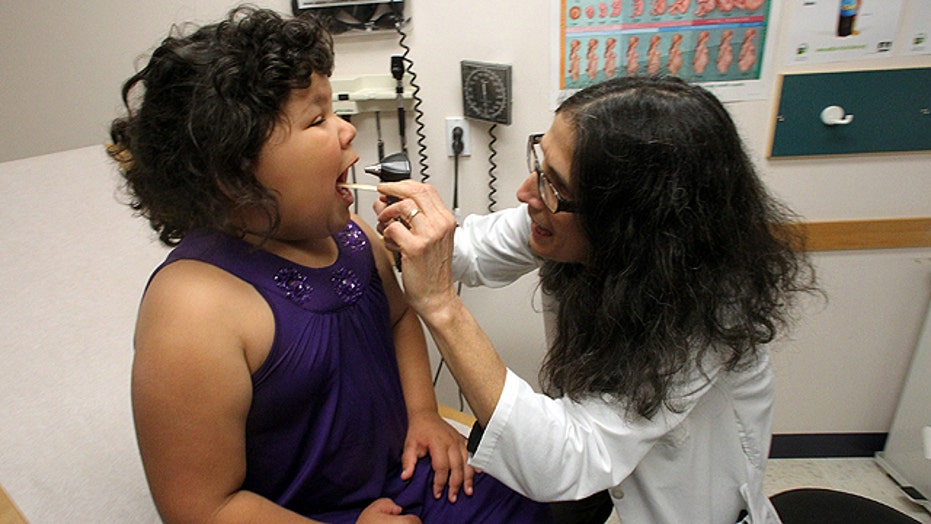 Are Americans ready for ObamaCare?

Reps. Burgess, Blackburn discuss the possibility of a delay

This is a rush transcript from "Hannity," September 27, 2013. This copy may not be in its final form and may be updated.

MONICAY CROWLEY, GUEST HOST: Joining me now with reaction to this and more, are Congresswoman from Tennessee, Marsha Blackburn and Texas Congressman Michael Burgess. Welcome to both of you. Thank you for being here.

Congresswoman, let me start with you, this political hot potato now has been bounced back to your chamber. The president said this afternoon he is not negotiating on anything, spending cuts, ObamaCare, the debt ceiling. He is not moving. He is immovable. And what do you say to that?

REP. MARSHA BLACKBURN, R-TENN.: We have invited the president over and over again to come and negotiate with us. We have extended the hand of friendship. We would love for him to meet us at the table and to work on these issues.

The fact is, the American people do not want this law. It is not ready for implementation. He has actually delayed different provisions, made 19 different delays on this, Monica, and looking at the stalling the implementation on it. But yet when we bring a bill, my bill, HR 2809 to delay it for one year, no, no, no, we don't want to do that. He's already admitted it is not ready for prime time.

So, when this hot potato comes back to us, there are a lot of my colleagues who are saying, well, we will put a couple other qualifiers on it, maybe delay for a year, maybe an individual mandate delay and we will send it back to the Senate.

CROWLEY: Congressman Burgess, I would like to get your read on this, too. Congresswoman Blackburn just raised the possibility of the delay and sending that back to the Senate, maybe a one year delay, sitting on the individual mandate, maybe some other things. There are two minds on this issue of delay. Some people say let's delay it, let's sort of delay the pain of implementing ObamaCare for one year. Other people say, well, wait a minute, let it go forward, let it collapse under its own weight, let the pain actually be inflicted on businesses and individuals and let the Democrats then hang by their own petard, by their own horrendous bill. What do you believe about a delay, where do you stand?

REP. MICHAEL BURGESS, R-TEXAS: They're both valid arguments. I haven't been a big plan of delay, I thought defund was the way to go. Let's be honest, Marsha is correct. The president is the delayer in chief, he started in February when he closed the window to people who wanted to sign up for pre-existing insurance coverage. And he said though, we're not going to assign anybody else this year, you have to wait until next year. The supposed cap on out of pocket expenses, he said enough for that. The employer mandate, that was a big deal, right? Before the Fourth of July, Valerie Jarrett in a blog post delayed that.

So, the president has been the big delayer. Now, the other predictory of letting it into action and letting the cookie crumble, sure, there are a lot of people who think that is a valid strategy. There's precedent for that. In 1988, Dan Rostenkowski who was a Democratic chairman of the Ways and Means Committee passed a catastrophic care bill, he went home and his town halls were unruly and unmanageable. And he came back to Washington and said, I have to get rid of this thing.

There's the possibility that that could happen. But honestly, Monica, there's going to be so much pain involved in that, and at this point I feel honor bound to try to stop the train wreck that I see coming.

CROWLEY: You know, Congresswoman, all of the things that the Congressman just laid out is true. And in effect this president is actually defunding his own law through all of the delays and waivers and exemptions he is giving to all of his political cronies. He's in fact caring out some of his own defunding of this law.

How do we then move forward? So, the Senate now is going to bounce it back to you. What are you guys prepared to do? I know the debate over the delay also talked about the Congressional exemption to ObamaCare that a lot of folks are say, hey, let's take that out as well. What's the next step here?

BLACKBURN: Well, the next step, we will meet tomorrow about noon. And I am sure different ones that favor different proposals will bring those forward and then the conference will make a decision. And you were talking about the Congressional exemption. That is one of those items that they're looking at other provisions that are dealing with entitlement reform, there are some that favor that. I think that people are really looking at the delay of the bill because, Monica, this is the way we not only stop the programs, but we stop all the taxes from taking place, the insurance excise tax, the medical device tax, those things that give that little pool of revenue that they have to have in order to stand this law up.

So I think the decisions tomorrow will be made. I think the discussion is going to be robust. But you are so right, when you talk about how he has given waivers and favors to his friends and his cronies. I mean, when you have got big labor agreeing with Marsha Blackburn that this is not a bit that's ready for implementation in prime time, then you know that people are beginning to turn against this, the majority of the American people don't want it.

And as Mike was saying, you know, of course it is going to be so incredibly disruptive. He is a physician. He knows how disruptive. We are hearing from hospitals that are closing, physicians that are closing practices, people that are losing jobs, businesses that are not expanding, insurance costs that are going up over five times what they're paying now. We have families that are looking at their out of pocket expenses increasing by about 300 percent. I mean, this is a lot of disruption to the health care marketplace.

CROWLEY: Oh, yes. I mean, the horror show has already started and the law hasn't even kicked in yet.

CROWLEY: Let me ask you Congressman a big question, and Congresswoman, I'd like you to weigh in on this as well. You know, four or five years ago, the president talked about the fundamental transformation of the nation. And of course, socialized medicine is the cornerstone of that. A couple of days ago, he said we are just a couple of days away from finishing the job. That's what he meant. And now here we are, and because of infighting within our party which is particularly shameful by the way, we now have the green light for ObamaCare, and I really salute both of you that you're doing everything you can at this point.

But my big question to you first, Congressman, is do you believe that the left has essentially succeeded in the fundamental transformation of the nation because they have been able to get socialized medicine?

BURGESS: No, because their product is so abysmally poor. Look Monica, this thing was never ready for prime time. It was kind of like saying, the dog ate my homework, so I turned in a rough draft and it accidently got signed into law. That's why it is so hard to implement, because there are so many errors recent into law and signed by the president.

But look, if the president really was serious about working with Congressional Republicans, how about he send the people from his agencies to our committee prepared to answer our questions and not stonewall us as they repetitively have done.

I reached out to our White House liaison early in the year, and I said, OK, you won re-election, when you come to our committees, be prepared to work with us, but we don't get any sort of responsible answer to any questions. And just last week, they lied to me. I said yes or no, are you going to be ready on October 1st? And the man gave some blathering answer. But the real answer was no, Congressman, we ain't going to be ready.

BLACKBURN: That's right. Controlling people's lives. This is what it is about, putting the nation closer to the edge of bankruptcy. It is already going to triple and costs, $2.6 trillion, we will add about $6 trillion extra, going forward over the next decade.

This is something that we have to stop now. Delay, defund, repeal, replace. That's our goal on behalf of the American people who were focused on freedom, free people, free markets. We cannot let them put this law into action.

CROWLEY: No, and we can't afford the fundamental transformation of America either.

BLACKBURN: You got it.

CROWLEY: Thanks to both of you. And thank for your fearlessness and keep fighting on. Thanks, guys.