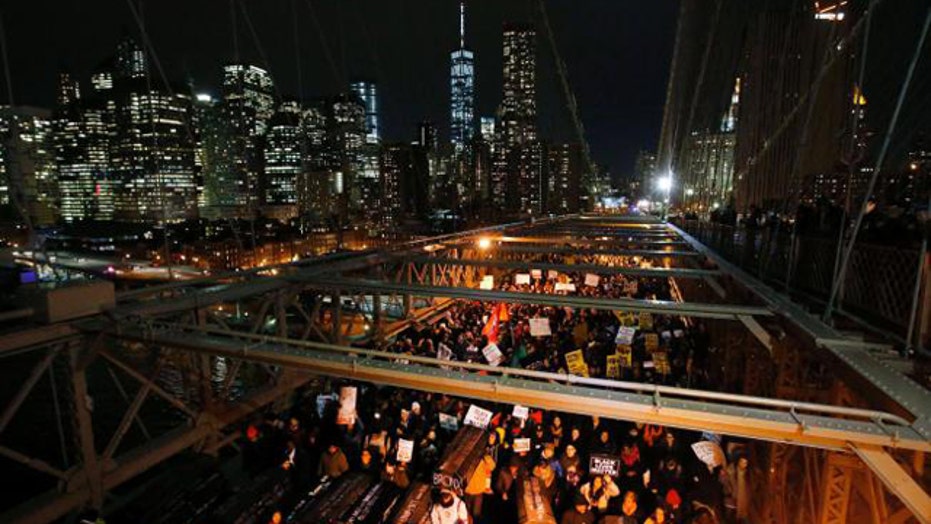 America's finest are under attack

Wayne Rogers: It's unfortunate. I mean, we've got the same kind of thing going on not only with the cops but with the people who are inciting the riots and that sort of thing. The fact you've got Al Sharpton who is an outrageous person, you know, who basks in this kind of stuff, for his own personal aggrandizement, terrible. Outrageous. Second thing going on is that the media coverage of this has been awful. I think the media helped to hype this because they show over and over again things like that. By the way, the same week Ferguson, over 80 people killed in the city of Chicago. I didn't see Al Sharpton or Reverend Jackson there, a worse tragedy. In addition to that, people who ferment and try to help this and push it along and in and ideological way and disregard the free market system, disregard the benefits that come from that and talk about poverty and this and that and the other, when, for example, we've got a great example right offshore in Cuba, where socialism has been there 50 years. They're standard of living is awful. Ours great. You got to listen to the United States.

Jonathon Hoenig: Respect for the cops. Respect for the rule of authority. Respect for law, Eric. This is the basis of which any sound society is based. All of these protests, I just have been scratching my head, what are these protests about? That the police hate African-Americans? What about all the African-American cops? That it's open season on blacks in this country? It's simply not true. This whole chant of black lives matter, life matters, and America is safer now than in decades because we're more individualistic than we've been in decades. Treat people as individuals, and racism goes away.

Juan Williams: You saw it in the campaign de Blasio ran in New York where he was clear that he thought that the income divide, the financial divide in that city was fostering an atmosphere of inequity and part of that was the police. That the police were protecting the affluent and harassing, intimidating stop and frisk profiles minorities but especially poor minorities. I think you're exactly right. I will say that I don't think that the race relations in the country are any better because of what has come from this. I mean, clearly we see in the polls now more of a divide between black and white than we've seen since, guess when, Eric, the '70s.

Michelle Fields: I think president Obama has set us back at least 30 years, when it comes to race relations in this country. And, look. De Blasio, these protesters, what they are protesting are the very policies and people who helped make New York city safe. New York City is so much safe because of the policies we have. And Bill de Blasio is working against the policies that really made New York City what it is in terms of the economy and it being safer. In the '70s, no one wanted to go to New York. Now you can go there and it's safe. Bill de Blasio is tells New York city he's on the side of the protesters, the thugs who cheered when the two police officers dead bodies were on the ground.

Michelle Fields: ISIS and our enemies are looking at how America responds. This administration needs to grow a spine and call it what it is. This is not a crime. This is an act of war. This isn't a kid who spray painted the side of your house. This is country who's threatening the American people saying if you go to a theater, you are going to suffer the same exact fate as those on 9/11. This president needs to call it what it is and realize that this is a serious issue and that everyone all of our enemies are taking note and seeing how we respond to this.

Jonathan Hoenig: To Michelle's point, they've destroyed billions of dollars' worth of Sony's property. Threatening to blow up theaters. Threatened to create another 9/11. That is an act of war, and to Michelle's point once again what has been the white house response? Treat this like a parking violation. What is the white house proposed response? Proportional response heard all of this time? Spineless in the administration. Not surprising.

Wayne Rogers: It was about a movie. Obama doesn't run Sony. Some other people do. Amy Pascal running right after this happened to go to seek out Al Sharpton's advice how to handle this? This is outrageous. Some of the dumbest stuff I've seen. I agree with Juan on this one. This is not an act of war. This is people who just shouting fire in a theater.

Juan Williams : Because the fact is, when you stand for the people and against the state, then you people say, oh, no, you can't, you must be a liberal. No, libertarian. Libertarian.

Jonathan Hoenig: So many laughs. So many great laughs. So many verbal harassment from Wayne. I mean, honestly, Wayne, I don't shut up, I grow up. When I look at you, I throw up. And that's my response. We had some great discussions. I feel like, Eric, we start the discussion and our millions of viewers pick up the discussion. They're the ones who bring it to the culture. These ideas, these political ideas, matter. They're changing the culture.

Wayne Rogers: It depends if they're talking over everybody, you know, the audience can't hear, everybody's talking at once. Somebody has to be quiet and let somebody else speak, that's all.

Michelle Fields: Well, look, this year, I learned to respect my elders, not to talk when Wayne's talking. Otherwise, I hear screaming in my ear. Not much has changed this year in the sense that Juan is still wrong about everything. All the time.

Eric Bolling: OK, time to wake up, America. As lawmakers and race batters are cashing in on your blood, sweat and tears. Not to mention your taxes. We're looking out for you and we'll continue to hold everyone accountable in 2015 when the free market comes under attack like this. "If you've got a business, you didn't build that. Somebody else made that happen." We will shine a light on it. When the President of the United States reveals the ominous underbelly of his socialist dream for America like this." Everyone gets a fair shot and everyone does their fair share." We call him out. We are your free market watchdog protecting the generator of an economic and military powerhouse. And we will watch them away from the markets too. ObamaCare. Benghazi. Four heroes were forgotten. IRS targeting conservatives. And it's spying on Americans or prisoner swaps for five terrorists and one prisoner Beau Bergdahl. That's our resolution to you, to keep the pressure on they, the lawmakers. After all, they work for us.