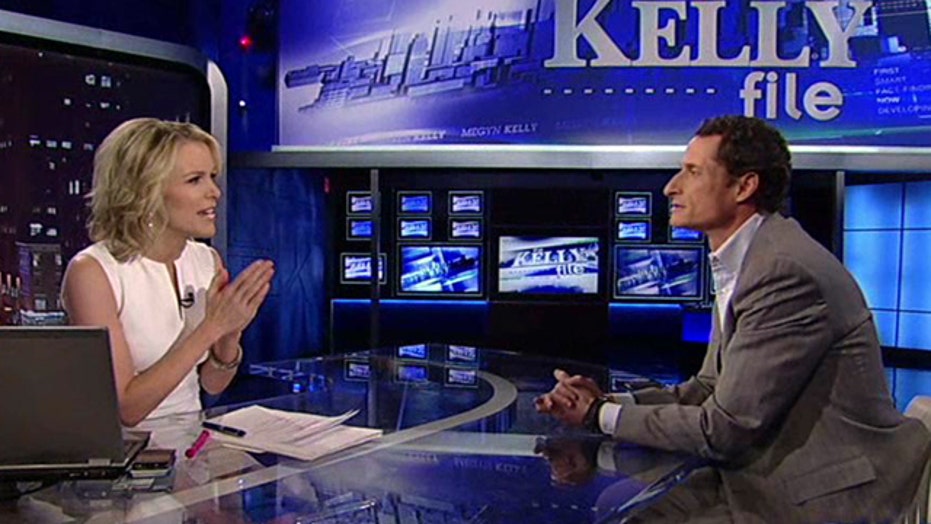 Former congressman reacts to the troubles in Washington

This is a rush transcript from "The Kelly File," January 20, 2014. This copy may not be in its final form and may be updated.

MEGYN KELLY, HOST, "THE KELLY FILE": I couldn't believe the hubris he had. If you walk around with that kind of secret, and you're going on national news, wouldn't you dial it back a little bit? You'd be a little on eggshells? Wouldn't you?

KELLY: My appearance a few weeks back on "The Tonight Show" sparking a fiery conversation the other when I sat down with former New York Congressman Anthony Weiner.

KELLY: I'm trying to understand how somebody with a secret like that could go on national television and be that cocky?

KELLY: Show the arms, this is why, I'll show you exactly what I'm talking about, watch.

KELLY: Let me tell you sir -- you're throwing everything at me so I can't offer any response.

WEINER: I get an opportunity -- you're doing an interview so let me respond to your question.

KELLY: Why don't you do a soliloquy. OK, you just take it away.

KELLY: I'll ask the question, you're not answering, just tell me, how is it fair.

WEINER: I was the guest that should be asked questions and you're talking over me the entire time. Do you think that is good TV?

KELLY: I think getting answers to my questions is good TV.

WEINER: But you think it is good TV to interrupt someone when they are talking?

KELLY: When they give not responsive answers --

WEINER: That is horrible TV.

KELLY: I don't work for you. I work for the viewers. But you tried to hijack.

WEINER: Do any of your viewers care what I have to say?

KELLY: That remains to be seen.

There is a lot of scandals in Washington right now and outside of Washington. You got bridgegate with Governor Christie. You have Benghazi with Hillary Clinton. As someone that handled scandals personally, I ask you when you see Chris Christie look into the camera directly and say, I didn't know anything about it. When you see Hillary Clinton look to the camera and say, I didn't know anything about the inadequate security in Libya. And you too looked into the camera, and said I didn't do this. Do you understand why people have a crisis of confidence and have reason to doubt the assertions being made by these politicians?

WEINER: I think each situation is different. I handled it very poorly. And then I compounded it by being dishonest about a personal failing. So I'm certainly not a great person to arbitrate on how other people deal with their crises.

KELLY: When you see them doing that, do you experience it differently?

WEINER: Here's what we know. We know the reports that looked into it in Washington said that Hillary Clinton did not know. We know that Chris Christie said he did not know, and there's no documents that said he personally did know. So we have some factual things. But each situation is different.

I think generally speaking, what happened in Benghazi was a terrible tragedy and people died. Generally speaking, what happened in New Jersey was a terrible abuse of power. And what I did was a personal failing that I didn't own up to. So, I don't think you can say, well, let's figure out some omnibus rule. I can tell you the rule that I learned is being truthful is always better than not.