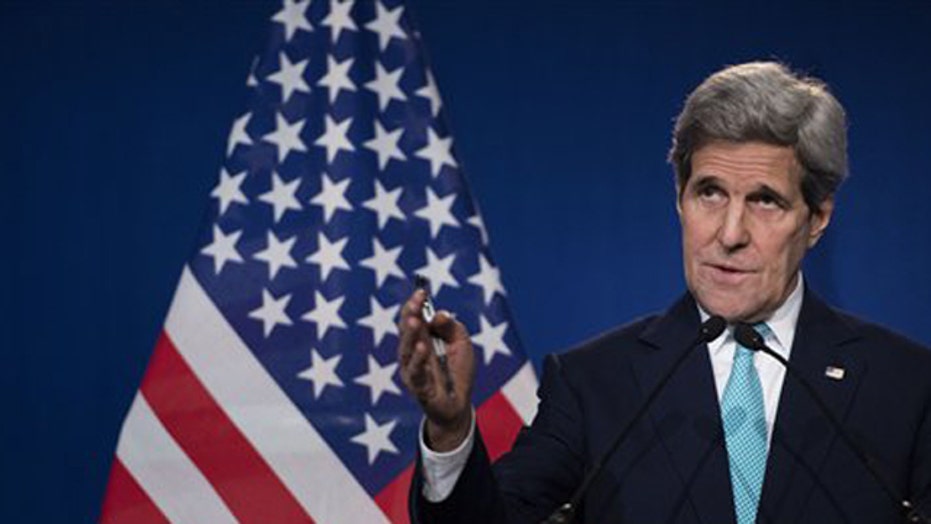 STEVE FORBES: As Churchill once said about Munich, "This thing is an unmitigated disaster." It's going to set the stage for a nuclear holocaust in the Middle East. Egypt, Saudi Arabia and Turkey have already indicated they are going to go with their own nuclear programs. Either you have a program or you don't. The Iranians have it, and they are going to continue with it. This is bad all around.

BRUCE JAPSEN: I think that there are a lot of politics that have to play out in this country. There are also a lot of hardliners coming out of Iran that didn't like the deal that thought the West got too much. I think it's a good thing because it marginalizes these hardliners in Iran. If they don't like it, it's a good thing because it makes them less important over there.

SABRINA SCHAEFFER: I have mixed feelings about it. I think it's only concerning if you miss a deadline when your end goals aren't clear. That is what we are really picking up on is that this is an administration whose end goals have not really been clear. It has been clear that it's reluctant to use force. Foreign policy and diplomacy is nuance- we need to consider our own financial interests. Is John Kerry over there really worried about the United States best interest or if he gets a Nobel Peace Prize?

RICH KARLGAARD: John Kerry and President Obama seem to be driven by personal reasons for personal glory. How narcissistic do you have to be to put the whole world at danger for your own legacy?

ELIZABETH MACDONALD: There is a good reason that Americans (smartly) understand what is going on- indicated by the poll. The Iranians have cheated and they have lied. No deal is better than this bad deal. They can make these existing centrifuges 20 times faster and have smaller enrichment facilities that they can hide.

JOHN TAMNY: The oil is going to flow into the U.S. regardless; this only becomes an oil story if the U.S. intervenes because that would be negative for the dollar. My problem is that why are we negotiating? Any agreement no matter how strong or weak is not worth the paper it's printed on. At some point we need to realize we needlessly elevate these countries by negotiating with them in the first place.

SABRINA SCHAEFFER: This will hurt the economy by driving up costs for Americans at home as well as businesses. This is not the first time the EPA has suggested to do something like this without driving up costs. They are wrong, remember the clean power plan which we found from an independent research association which said it would be 7 times more expensive than the EPA said it would be.

BRUCE JAPSEN: I think go bold and go big here. We always hear it's going to kill jobs, but we are still creating jobs- and we have been for months and months now. I just don't see it.

ELIZABETH MACDONALD: The EPA Chief Gina McCarthy said about these new rules. She said if you add up what we will avoid between now and 2030 it's more than double the carbon pollution from every power plant in America in 2012. So that puts it in perspective. She also said it would be the equivalent of cancelling out all the cars and trucks on the road. So there's your economic impact.

JOHN TAMNY: Of course it's going to hurt the economy, but that's precisely why it's not going to happen. Let's repeat this, the Obama administration is over with- it has been over with since the end of 2012. No future president or congress is going to abide such a lousy deal. Markets realize that and that is why they're rallying. No one takes this seriously.

STEVE FORBES: This is part of Obama's war against prosperity. Putting on these extra costs on the economy is going to slow it down. We are the one big country in the world where emissions have gone down- what's the problem?

CALIFORNIA WATER REDUCTION MANDATE DOES NOT APPLY TO FARMERS

RICH KARLGAARD: I don't think its crony capitalism so much as it's misplaced romantic love of farmers- you see it in France and in the Iowa caucuses. Social media chatter I think is going to undermine the farmers this time. As you pointed out, when you look at 80 percent of the water and 2 percent of the GDP it's ridiculous.

STEVE FORBES: It shows the misbegotten policies of water in California, which goes back to the 1870s- massive subsidies. What they should allow farmers to do if they have excess is sell it on the free market. The problem would be solved. Right now it's all about lobbying.

BILL BALDWIN: When it comes to crony capitalism, the farmers have nothing on the greens who did 2 things: they blocked the construction of new reservoirs and secondly they persuaded the government that the natural way to help the deltas mill was to empty a manmade reservoir into the ocean. That is where the problem is.

SABRINA SCHAEFFER: It's interesting to see the greens fighting their own impulse. The explanation is simple; we have had price control and massive subsidies for farmers and a shortage of supplies. The end result is that water is cheap- it's easy to waste and that's the real problem.

CARRIE SHEFFIELD: Everyone has to step up. I'm from Utah. When I was a kid we had to watch our sprinkler use. To ignore farmers is to ignore the massive jumbo-sized elephant in the room. 80 percent of the consumption. Farmers are 22 percent inefficient that would solve their drought problem right there.