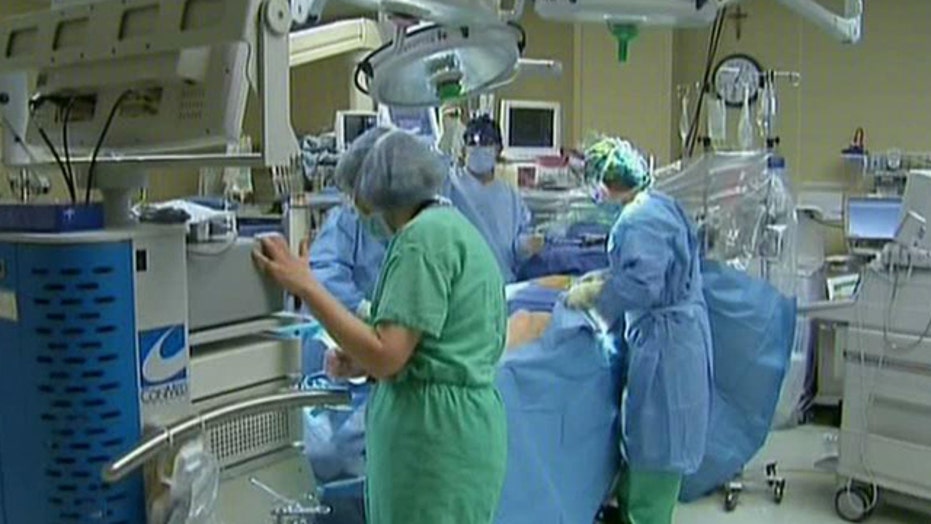 Another state, another doctor shortage

SCOTT MARTIN: I think we did, Brenda. Look, taxes are tough at anytime, but certainly, in a time like this, where GDP growth just got revised to, oh, my goodness, 0.1 percent on the plus side for Q-4 - unemployment is still ridiculously high. We just hit the rich, the spenders and the job creators in this economy, and its showing. Consumer confidence is falling. Purchases of big ticket items are falling, Brenda - it's not going to work we're already feeling it.

JULIAN EPSTEIN: I think the place we may all agree is when you have a weak economy like we have, you don't want to see us going after the deficit the way we are, whether it's the tax increases on anybody or big spending. Most of the economists that have looked at this, including the CBO say that the proposed taxes of this Obama administration talking about closing loopholes, and carried interest, will have zero to maybe 1/10 of 1 percent on GDP. We are going to cut the debt. I think we do it in the long-term, not the short-term, but look, here is the central problem that you can't ignore. Spending right now is about 23 percent of GDP - federal spending. Taxes are at historic lows for about 16 percent of GDP. Domestic discretionary spending is lower than it's been since 1962. So, you cannot cut your way-- spending cut your way out of this problem. If you want to attack the debt and deficit you have to have a combination of the two otherwise the math doesn't add up.

GARY B. SMITH: Well, I think you just saw it, Brenda, with what's happening at Wal-Mart. They clearly stated that you know, that's their constituency, people that take home a paycheck, you know, every week or two weeks, saw that the payroll tax gets hiked and what happened? Wal-Mart got slammed. They now, you know, I'm sure there were other factors, but look, it's hitting that broad swath of quote, unquote, middle America that Obama champions and rightly so, right where it hurts. So, any kind of tax hike at this point is going to be devastating. Look, you know Julian likes to site studies no less than Christina Roamer who headed up Obama's council of economic advisors, stood the impact of tax hikes and she said that for every dollar extra the government takes in tax hikes, GDP declines by $3. Look, it gets back to the basic point we've made on the show many times. Is there anyone out there that thinks that the government can spend our money more efficiently or effectively than we can? I think the answer is no. So, can we cut? Absolutely. Should we cut is the bigger question, and we should, ASAP.

JONAS MAX FERRIS: Anytime you raise taxes you're dragging the economy. Luckily, this year, the relatively small taxes that most people saw could be handled by this level of economy. If the economy was in worse shape, we'd already probably be another in another recession. And we're not going to balance this budget with the current tax scheme, it's going to go higher across the board down the road, but it doesn't need to kick in this year or next year. We're not on a crisis anymore, we made some progress and bigger long-term problems, but we're not going to be able to cut discretionary spending and balance a budget. At some point revenue is going to have to go up and the nondiscretionary is going to have to get cut significantly. Again, it's a 10, 15-year problem.

TOBIN SMITH: We know not only from that how they pick money up, but from common sense - if you take money out of the hands of capitalist, you have capital owners and you have people who apply that capital. When you have less, you're going to have less economic activity. We know that. I do agree with our new found colleague Julian that the absolute long-term issues, you know, make everything else pale in comparison. In the short-term here, the word we should have is about growth. The words that we need to hear are about the things that we're doing to grow our economy and to have entrepreneurs start businesses.

GARY B. SMITH: Well, Brenda it starts with the very first doctor you see and that's the primary care specialist. You don't need to look further than Massachusetts which of course was the model, at least in some camps they say, of Obamacare. They face a shortage, Brenda, not only in primary care specialty, but in eight specialties across the board. It's estimated by health care that by 2014, 7 million Americans will have trouble finding a primary care physician. The reason, primary care, which is at the tip of the iceberg here, they're the ones that have the most paper work, which you know is going to go up under Obamacare and they get paid the least. Brenda, I'm going to steal a line from Neil, "The best way to benefit from Obamacare is to buy stock in the company that makes waiting room chairs because that's what you're going to need after this all kicks in."

SCOTT MARTIN: Yeah, it's nationwide, Brenda. And Florida just happens to be an example here for a couple reasons. One, it's a terrible tort reform state. It's just very tough there. And don't forget, too, there's a lot of Medicare parents. When you're in a private practice and looking for reimbursements for Medicare - you're not exactly in a great spot - especially down the road. You have all these hospitals that are buying up the private practices and overpowering some small care places because they're got more negotiating power with the insurers. It's a tough place to be in, especially in Florida.

JULIAN EPSTEIN: Yes, I'm worried about it. We hear about the health care lotto that was unconstitutional. Then we heard the republican governors saying they'd never take Medicaid expansion and now they're flocking to Medicaid expansion. The Medicaid expansion which is the issue here will cover 21 million people who weren't insured. And many of those uninsured, the doctors who are treating them are in a better position treating insured patients than the uninsured. Many had to treat them under law even when they weren't insured. The Obama law, reduced 10 billion over 10 years, provides bonuses to doctors to provide the Medicaid patients. So what I think, this is the latest complaint in a series of complaints about the health care law that turn out not to be true, from detractors from the law and then what we see is the Supreme Court embraces it, republican governors are embracing it and everybody is embracing it.

TOBIN SMITH: We've had doctor shortages for the last five years and again, I'll use Massachusetts. Massachusetts has the second most physicians per population in the United States. Now, if anybody was not going to have shortages, they would be it, right? Well, they went from a 21 day waiting period for a new doctor, pre-Massachusetts care to somewhere in 42 to 45 days for a primary care physician. That was just massive because they put more people in the system than physicians. The second issue is that Medicaid and Medicare are not forced on doctors, they don't have to take it and they lost 20 percent of their doctors.

JONAS MAX FERRIS: I'm pretty sure there's not a shortage of plastic surgeons in South Florida. The reason is there are no insurance companies and the government decreeing how much money doctors can make. We've increased the demand for health care especially when they decree us to get health insurance. You can't increase the supply of doctors if they can't make more money as demand for services go up. That's the way costs go up when you have shortages of lines for everybody.

TOBIN SMITH: First off, people are fed up with gas prices and in fact, the Midwest has sort of been benefitting from this disparity of oil availability. This study just proved I think what many of us have been saying from outside experts, that in fact, not only did 1/10 of 1 percent of temperature rise whatever that means, but more importantly the jobs and the gas are a boost in a time when we need this boost.

GARY B. SMITH: Look, if Obama signs it off I'll give him props for being pro energy, but this isn't just about the keystone pipeline. I think this is the tip of the iceberg, yes. If the administration really is pro energy, then they're going to do stuff like open up Anwar and allow more off shore drilling and give back some of the permits they took away. That's what I'm looking for. There are estimates all over the place, how many jobs this is going to create. Julian's probably right. Oil prices are probably unaffected for the short-term. Long-term they're all positive.

JONAS MAX FERRIS: Look, this is dirty fuel from tar sands, but the only part we can control is the pipeline in America. In some ways it's an improvement over the alternative which is shipping it to china. It's not great, but better than anything else and we probably should go for it.

SCOTT MARTIN: Brenda, I want our hands on that oil. For every sent of increase at the pump it takes about $500 or so billion out of the market and economies. I like this here and it's a reason we can actually try to start getting some of the oil and it's going to create jobs guys - jobs and tax revenue. I think that's a good thing.