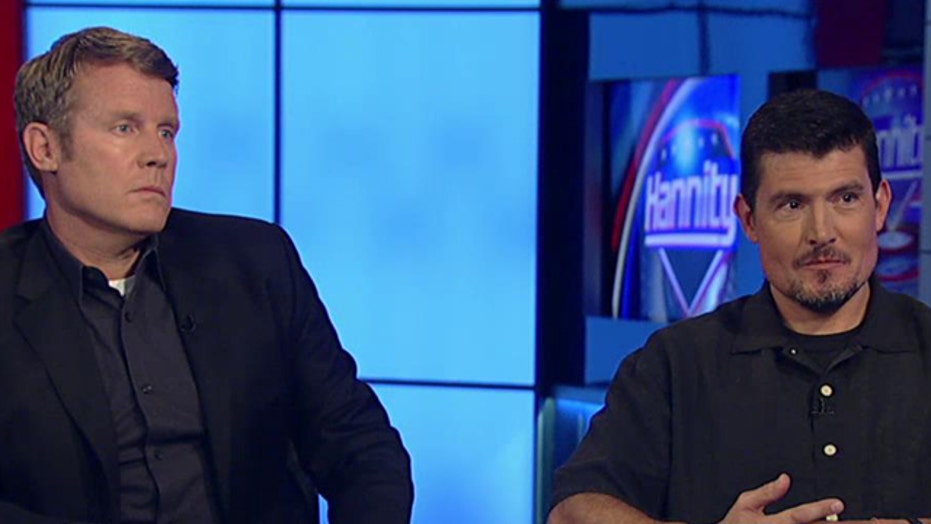 Democrats: No 'stand-down order' was given

This is a rush transcript from "Hannity," September 17, 2014. This copy may not be in its final form and may be updated.

SEAN HANNITY, HOST: Back with us in studio tonight to respond are two members of that Benghazi Annex Security team. They risked their lives that night, Mark Geist and Kris Paronto. They co-wrote the brand-new book, "13 Hours: The Inside Account of What Really Happened in Benghazi."

I want to get into this because you have members of Congress that weren't there that are calling you liars, that the stand-down order was never given. Is that true?

MARK "OZ" GEIST, BENGHAZI ANNEX SECURITY TEAM: No, it's not. I mean, they're trying...

HANNITY: They're lying about you!

GEIST: They're trying to play on words -- no official stand-down...

PARONTO: We were delayed. The stand-down -- the words "stand down" were given and we were delayed (INAUDIBLE)

HANNITY: The words -- the actual words "stand down" were given.

PARONTO: Yes. And John Tiegen Tigg (ph) has said that on multiple occasions...

HANNITY: The person that gave them.

PARONTO: He was the one that received it. I received the two waits...

HANNITY: You wouldn't -- you wouldn't possibly know where the -- where it started from.

PARONTO: No. We know from our immediate chain of command, which was -- which we say in the book is Bob.

HANNITY: Would he make that decision on his own, when he knows -- you guys were listening to the communications at the consulate, right?

HANNITY: And what finally pushed you over the top to disobey orders - - you disobeyed orders.

PARONTO: Yes, we did.

HANNITY: What finally pushed you to that point was you heard over the communications, If you don't get here, we're going to die. True?

HANNITY: And you believe that people did die in the -- in the 30 minutes, the interim...

PARONTO: And keep in mind, 30 minutes that we stood down, and it took us another 30 minutes to go on foot just to get there because their defenses were -- they basically were able to reinforce their defenses. So it cost us 30 minutes just for the stand-down, but we don't know how much longer it really cost us because we couldn't drive all the way. We actually had to disembark and go the rest of the way on foot.

HANNITY: You know, there's a lot of things -- my kids, if they get in trouble, like every kid, you know, I'm fine with it. I can live with mistakes. All kids are going to make them. But when they lie to me, they're in big trouble.

Now, my question is, they are -- you're telling us that these politicians that weren't there, and you were there...

HANNITY: ... and you left your safe annex at the time and you went into the firefight at the time and you brought back 25 people, which makes, in my mind, you guys are heroes that night. And they're calling you liars.  So I want to know, you know, what would you like -- what do you want to do about that? I would be pretty pissed.

GEIST: I'd like to invite Mr. Schiff to a debate.

PARONTO: We could talk -- and we can talk to him about it.

GEIST: We can talk about it.

PARONTO: We can discuss it.

GEIST: He wants to see and say that to my face, we can talk about it and talk about everything.

PARONTO: It's difficult for me because you're calling a Ranger, a SEAL and three Marine liars.

HANNITY: Two of the SEALs died.

PARONTO: Well, then you've got all -- yes, and two of the SEALs did, and you also still have the one Jack (ph), the living SEAL. He's still alive. We all -- we all went, we all testified at one point, some point during the hipsy (ph), said the same thing we're telling you now.

HANNITY: I'll tell you what I'm going to do. I am willing to invite all of these Democrats...

HANNITY: ... that accused you two of lying on this program, and see - - I would be surprised if they'll say it to your face. Let's see if they have the guts to come on the program, gentlemen. You've accused American heroes of lying. Congressman Smith, Congressman Schiff, they're invited on the program. We're going to make calls first thing tomorrow and see if we get statements from their offices.

Have you been called -- I'm watching the hearings today, and I'm thinking -- all right, I read your book. Your account is so different.  You talk about stand-down orders they deny. You said there was no YouTube video connection. You said that there was no spontaneous demonstration, that this was a planned terror attack, right?

HANNITY: OK. And -- but that's -- we heard a totally different story! Were the American people lied to, in your opinion?

PARONTO: If their -- if it differs from what we said in the book and that same time, same account, I would say, yes, they have been.

PARONTO: I haven't seen any. I haven't been in any, and I've been through a lot of demonstrations and a lot of...

GEIST: You don't see them bring those things.

GEIST: You know, I it to the readers and there listeners out there and the television viewers, just read the book. And you know, you'll make your decision based on the information you have and what we say in the book because we were there, like you said.

PARONTO: And keep in mind, we quit our jobs. We resigned from working government work and contracts to do this. So it wasn't that we wanted to sell books or we wanted -- it got to us so badly that we actually got together as a team and said, Hey, you know what? This story's getting spun way out of control. It's either us standing up and telling the truth, or it's just going to continue down that (INAUDIBLE)

GEIST: I was laying in a bed, a hospital bed...

GEIST: ... surgery in Germany. And there was a consul general from State Department and his wife right there. They could have asked, or -- and any question they would have wanted about what happened there and gotten the truth from on the ground.

HANNITY: Why have you never been called to testify?

PARONTO: No, we have. We have gone in front of the House Intel subcommittee.

PARONTO: And we did tell them...

PARONTO: Behind closed doors. Why our testimony wasn't part of their findings, or maybe it was and they just decided not to listen to it, I don't know. But we said the same thing to them as we're telling you now on TV, as we wrote in the book. It has not changed.

HANNITY: All right, so what we're going to do -- I'm going to follow up with these congressmen, and we're going to -- hopefully, we'll put you all in the same room...

PARONTO: I would say so.

GEIST: I would -- I agree with that 100 percent. Looking forward to it.

HANNITY: All right. And what you did that night was amazing. You were there when Ty Woods died, too.

GEIST: Yes, he was right beside me.

HANNITY: Right beside you. He died right in front of you.

HANNITY: Unbelievable. All right, guys, thank you. Good to see you again.

PARONTO: Thanks. Appreciate it.

GEIST: Thank you very much.